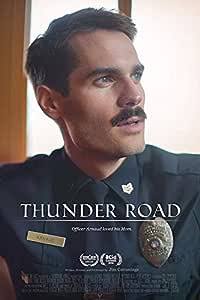 Jim Cummings (Actor, Director), Kendal Farr (Actor) Rated:
Unrated
Format: DVD
4.1 out of 5 stars 188 ratings
Available at a lower price from other sellers that may not offer free Prime shipping.

Starring and Directed by Jim Cummings

Jim Cummings is an independent filmmaker, writer, and director that is working to find new ways to connect to audiences. Jim has proven to be an action oriented thought leader, mentoring with Sundance Institute’s Collab and founding the Short to Feature Lab. He has been giving speeches at places like SXSW since 2014 and doing articles with Filmmaker Magazine and Ted Hope’s Hope For Film about the state of independent cinema, and what comes next. He is also known for ranting on Twitter and trying to convert filmmakers at film festival happy hours.

From the Sundance-winning short film, Thunder Road follows officer Arnaud on a journey to raise his young daughter as a love letter to his late mom. A tragicomic portrait of a failing authority figure in the American South, the film will have you laughing and crying, often at the same time. Winner of the SXSW Grand Jury Prize.

It walks so many fine lines between comedy and drama that the balancing act is exhilarating to watch --Roger Ebert.com

Cummings, who also wrote and directed the film, has delivered a remarkable tragicomic performance in the lead --The A.V Club

4.1 out of 5 stars
4.1 out of 5
188 customer ratings
How does Amazon calculate star ratings?
Amazon calculates a product’s star ratings based on a machine learned model instead of a raw data average. The model takes into account factors including the age of a rating, whether the ratings are from verified purchasers, and factors that establish reviewer trustworthiness.

Susan
5.0 out of 5 stars Weird, but in such an Beautiful Way!
Reviewed in the United States on November 23, 2018
Verified Purchase
Thunder Road is one WEIRD movie. And so is Officer Jim Arnaud, a middle aged police officer whose mother just died. In fact, the movie opens at his mother's funeral, just before Jim gives his eulogy. It seems that she has died just as Jim's life is at a crisis point. I won't spoil it for you by telling you everything that has been going wrong for him. Suffice it to say that these problems have formed a sort of crucible of fire that is beginning to purify some of his thoughts. He begins to reflect upon his lost opportunities in relationships, how he could have been a better father, son, husband and friend. These thoughts bring him a lot of pain. He begins to fall apart and it's funny- but in such a tragic way that you feel ashamed of your laughter. The way Cummings weaves the eponymous song, Thunder Road, throughout the story elevates this movie to art- and that brought tears to our eyes. Truly beautiful. We especially loved the last sequence. Jim Cummings wrote, directed and starred in this incredibly heartfelt, yet funny movie. He seems to understand the truly vulnerable status of the human mind and heart, yet can make fun of us without malice. Somehow, Cummings' mastery of this odd styling of comedy/drama works. It's very unique and I, for one, look forward to seeing more movies from him.
Read more
37 people found this helpful
Helpful
Comment Report abuse

carol
5.0 out of 5 stars Soul Food
Reviewed in the United States on November 8, 2018
Verified Purchase
Two movies I have recently watched are food for the soul: this one, which left me tearful and smiling and greatly uplifted; the other one, Chicken, affected me as deeply in the same ways. I more than recommend both, I urge you see them.
Read more
17 people found this helpful
Helpful
Comment Report abuse

William Boyle
5.0 out of 5 stars Pulling Out of Here to Win
Reviewed in the United States on November 21, 2018
Verified Purchase
I’m a huge fan of the short & was anxious to see how it’d work as a feature. It’s a knockout: funny, raw-nerved, unpredictable. As a writer/director, Cummings makes weird, wonderful choices. As an actor, he’s one of the all-time greats at crying and shouting; his performance is full of slapstick physicality and just tender as hell. Can’t stop thinking about this beautiful film.
Read more
15 people found this helpful
Helpful
Comment Report abuse

Garet Abignail
5.0 out of 5 stars Brilliant in so many ways.
Reviewed in the United States on November 16, 2018
Verified Purchase
Just an incredible film. Also an incredible achievement for the director/actor/writer in getting this film made. Bravo Mr. Jim Cummings. Can't wait to see your future work. Keep telling stories that really matter.
Read more
18 people found this helpful
Helpful
Comment Report abuse

Andrew T. Drefs
1.0 out of 5 stars What's the point?
Reviewed in the United States on November 10, 2018
Verified Purchase
We found this movie to be completely unentertaining and pointless. Yes his mom dies and yes he's raising his daughter but so what? Where's the heartwarming story, where's the humor? We got a good 20-30 minutes into this and just shut it off out of boredom.
Read more
15 people found this helpful
Helpful
Comment Report abuse

Amazon Customer
5.0 out of 5 stars Heartfelt/Uplifting with a very human sense of humor to it
Reviewed in the United States on March 16, 2019
Verified Purchase
I recently went through the loss of a pet and this movie spoke to me on a very deep level. I identified deeply with the mix of emotions Jim Cummings' character is feeling and displaying. I like the inclusion of the desperate comedic side of grief. Not everything is stoic and somber and sad when bad things happen. They are, to a degree, but in our grief, we do silly things or act foolish. Those moments are the most real, for me. They really brought a sense of realism to the entire production. It's okay though, we all have our own ways of grieving. I've been told by others that it's totally normal. (To those that have seen the movie, you'll get that.)
On a technical level, this movie is beautifully shot. I heard that it was made for around $190,000. I've seen movies with 10 times that budget that didn't look this good.-
Lastly, all of the long takes really add a sense of purpose to every scene, really letting you marinate in the emotion of the moment on screen. This movie is quite ambitious (for what I believe is a first feature?) and it really shows. You can really tell this movie was made by someone who really knew what they were doing and knew very well what they wanted to get across with each screen. The movie moves along at a brisk, refreshing pace, giving you purposeful bits of information in every scene with as little as a characters facial expression. You really feel like you're along for every moment of this journey with this guy.
I really loved the scene in the classroom with the parent teacher conference. Very realistic. Little touches like that with the desk, really added a nice extra layer, a little extra TLC. It would have been so easy to go the typical overreaction route, but his unique reaction really added something new to the scene and made the payoff all that more meaningful. (those that have seen it will know)
Watch this movie!

M. Vrancken
5.0 out of 5 stars Not what you expect.
Reviewed in the United States on March 8, 2019
Verified Purchase
Considering I was a sobbing mess by the last scene, suffice to say, if you go into this thinking it's a heartfelt comedy, I would argue that THAT notion is disingenuous to the masterpiece that this film is. It's so much MORE. Yes, there are funny parts and some incredibly awkward parts (the opening specifically), but those are all dominos set to fall as Jim's life crumbles around him and he loses literally everything (including his pants) only to rise from the ashes with the few things that really REALLY matter. I struggled with how bleak and hopeless some scenes were, and I really considered just turning the film off. But I'm glad I stuck with it and gave it the honest full-watch. It's 100% worth your 90 minutes.
Read more
8 people found this helpful
Helpful
Comment Report abuse

B. Liu
1.0 out of 5 stars Painfully bad waste of time and money
Reviewed in the United States on November 24, 2018
Verified Purchase
I generally enjoy independent films that may have quirky characters, unusual pacing, ambiguous endings, etc., but my hustband and I found this painful to watch. I don’t know what other reviewers saw that we didn’t, but we found the acting to be stilted, and the direction & camera work are amateurish. The story did not draw us in, but we continued to watch, hoping that—based on the comments of prior reviewers—there would eventually be a payoff. But no. We found nothing uplifting or heartwarming about this film. It was a waste of our time and money. If one could “return” a streaming rental for a refund, I would.
Read more
9 people found this helpful
Helpful
Comment Report abuse
See all reviews from the United States