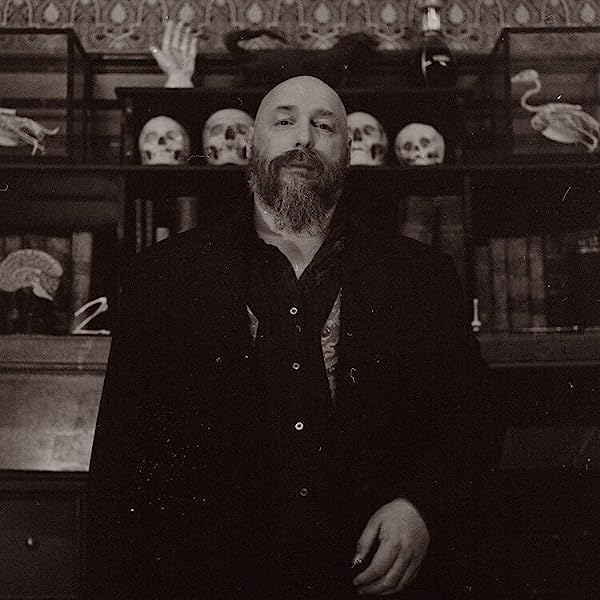 by Warren Ellis (Author), Mike Deodato (Illustrator)
4.6 out of 5 stars 37 ratings
See all formats and editions
Sorry, there was a problem loading this page. Try again.
The Thunderbolts' wild ride continues with "Caged Angels" as Thunderbolts Mountain is being used as temporary incarceration for captured superhuman combatants. With so many super-powered people in one place, how can things possibly go wrong? Collects Thunderbolts #116-121, Thunderbolts: Breaking Point, and Thunderbolts: International Incident.
Read more
Previous page
Next page

"A Christmas Too Big" by Colleen Madden for $14.39
A little too much Christmas cheer… | Learn more

Warren Ellis is the author of the Amazon Top 100 2016 book NORMAL and the New York Times- bestselling GUN MACHINE, the writer of award-winning graphic novels like TRANSMETROPOLITAN, PLANETARY and FELL, and is the creator and writer of global top ten streaming hit show CASTLEVANIA on Netflix.

The movie RED is based on his graphic novel of the same name, its sequel having been released in summer 2013. His GRAVEL books are in development for film at Legendary Pictures. IRON MAN 3 is based on his Marvel Comics graphic novel IRON MAN: EXTREMIS. He's also written extensively for VICE, WIRED UK and Reuters on technological and cultural matters.

Warren Ellis lives outside London, on the south-east coast of England, in case he needs to make a quick getaway.

N. Durham
HALL OF FAME
5.0 out of 5 stars Spectacular
Reviewed in the United States 🇺🇸 on December 30, 2008
Verified Purchase
Warren Ellis' revamping of the Thunderbolts continues in Caged Angels, which finds the team of former supervillains that hunt unregistered superheroes in a bit of dissaray. After the events of Faith in Monsters, Norman Osborne brings in Doc Samson in an effort to try to reach out to Penance, while a plot unfolds to take the Thunderbolts out from the inside out. In the meantime, Swordsman wants what he's been promised, Venom goes on a rampage, and Norman's sanity reaches a breaking point, resulting in the return of the Green Goblin. Naturally, things don't go well for anyone involved. What Ellis has managed to do so well during his run on Thunderbolts is take many of the unsavory aspects of the post-Civil War Marvel universe and blend them up into what you get here. His little jabs at current Marvel continuity make things all the sweeter as well. Mike Deodato provides more excellent artwork, which makes this package all the sweeter. All in all, Ellis and Deodato's take on Thunderbolts doesn't disappoint one bit, and definitely deserves your attention.
Read more
2 people found this helpful
Helpful
Report abuse

Caramel Crusader
5.0 out of 5 stars Brilliantly Twisted
Reviewed in the United States 🇺🇸 on March 4, 2009
Verified Purchase
This is the guilty pleasure of the marvel universe. Ellis has taken this book to all new lows (in a good way). Ellis is not afraid to show the thunderbolts for what they really are: deranged lunatics, criminals, liars, and murders. This is why this book is such a great read....you can never anticipate what will happen next because these characters are so self-involved and heinous that you cannot begin to imagine what direction the story is going to move in. This book is a great closing chapter to Ellis' run on Thunderbolts and I recommend that any comic book fan should pick this book up.
Read more
3 people found this helpful
Helpful
Report abuse

Seth
5.0 out of 5 stars Great story
Reviewed in the United States 🇺🇸 on February 14, 2014
Verified Purchase
This story is a really great one from the thunderbolts. In this you get to see the thunderbolts going crazy just like they used to be because of a group of telepaths they have Inprisoned. Venom and Swordsman are brutal and Green Goblin is just plain insane while Doc Samson and Penance just sit in their room having a good time between psychologist and patient. How everything resolves may seem all of a sudden out of nowhere but is awesome nonetheless
Read more
Helpful
Report abuse

TheOnlyRealSage
5.0 out of 5 stars The best of the Thunderbolts
Reviewed in the United States 🇺🇸 on March 11, 2010
Verified Purchase
After reading volume one, I didn't think the Thunderbolts could get any better. Boy was I wrong. I didn't really like the Swordsman at first and I thought he was weak, again this book has proved me wrong. Just when I thought it couldn't get better, the Green Goblin returns. This truly is a great, if not amazing, story.
Read more
Helpful
Report abuse

Fc
5.0 out of 5 stars Better than the first volume
Reviewed in the United States 🇺🇸 on February 4, 2014
Verified Purchase
Without spoiling anything this volume sets up future stories and leads into dark reign. The art is fantastic. The Thunderbolts are outweighed by some of the people they imprison. You need to read Civil War to understand it though.
Read more
Helpful
Report abuse

Spaceghost777
5.0 out of 5 stars Caged Angels
Reviewed in the United States 🇺🇸 on May 13, 2013
Verified Purchase
Warren Ellis works his magic on a standout T-bolts run. If you get this you should get his Faith In Monsters volume as well. Great titles for these two volumes.
Read more
Helpful
Report abuse

T.J.
5.0 out of 5 stars Fantastic
Reviewed in the United States 🇺🇸 on April 9, 2014
Verified Purchase
This comic is a rare treat. For anyone who is a Marvel fan this trade, combined with the previous one, is a great little story.
Read more
Helpful
Report abuse

Major Tom
4.0 out of 5 stars More dysfunctional goodness from the Thunderbolts gang..
Reviewed in the United States 🇺🇸 on February 16, 2009
After reading Ellis' previous Thunderbolts run collected as "Faith In Monsters", I was instantly hooked on these dysfunctional characters and had to read more. Somehow, this collection seems to lose the momentum built up by "Faith In Monsters", as much of it takes place in Thunderbolts Mountain. It does still contain Ellis' novelistic approach to getting inside these character's heads--going deeper into Penance's torment for being at the center of the events causing Marvel's Civil War--really the crux of this collection is Penance. I like how Doc Samson proves to be a sympathetic confidante to him as well (and Samson's imagined welcoming to Osbourne is funny and memorable as well).

As before, Ellis has also been foreshadowing Norman Osbourne's own buried madness, and we get to see him snap here. Not to SPOIL anything, but it was hard to tell how much these characters were just messed up or if they were being controlled by the new inhabitants of Thunderbolt Mt's prison. We don't get much more insight into Mac Gargan's Venom, Swordsman, or Radioactive Man. Songbird and Moonstone are almost so interchangeable that the only way I can tell them apart is the coloration to Songbird's hair. There seems to be scene after scene here of the characters knocking each-other through walls. Again, not so much a complaint as an observation. Mike Deodato Jr's pencils deliver these hyper-kinetic action scenes once again in the same sketchy, cinematic way.

There's so much to sink one's teeth into here (pun intended), that I can wholeheartedly recommend this collection. Historically, this team of anti-heroes is always changing, as is the creative team. This incarnation and Ellis' scripting will probably always be the highpoint of the Thunderbolts for me.

godzilla78
4.0 out of 5 stars nice!
Reviewed in the United Kingdom 🇬🇧 on August 25, 2008
Verified Purchase
Warren Ellis continues to show the thunderbolts for what they are.....disfunctional nutcases! The thunderbolts are torn apart from the inside and used against one another in a cunning plot which seeks to destroy each and every one of them. Ellis captures the complete insanity of Osbourne perfectly whilst highlighting just how dangerous and unstable the team are as a whole. I'm not a particular fan of Deodato's work but in this volume he really has pushed the boat out. Fans of the previous volume won't feel let down by this. I just wish it was longer and that Ellis was writing more of the thunderbolts but what the hell. As Marvel comics go, this is quite a dark and nasty corner of their universe.
Read more
4 people found this helpful
Report abuse

Smith
4.0 out of 5 stars Part 2 of a definitive villain story arc.
Reviewed in Canada 🇨🇦 on August 15, 2012
Verified Purchase
If you don't know what the Thunderbolts are, they are a group of villains tasked by the government to do justice. Sounds like it won't work, but that's where the fun is. These particular Thunderbolts are rounding up unregistered heroes in the wake of Marvel's Civil War.

It's a pretty simple concept but when most of your team, not to mention the leader, is clinically insane it becomes much harder, also tack on the fact that one of your team is eating people and it's pretty much pure fun.

The writer is Warren Ellis who knows what he's doing in the comic book world and never disappoints here. Not a sloppy line just wonderfully crafted dialog. The art is by Mike Deodato who is just fantastic, although some people have criticisms for him. He goes for a more realistic in the faces style and sometimes they look overly smooth but ultimately he knows his anatomy and proportions so that you're not taken out of the experience by bad art.

A note for big fans is that this run goes directly into Dark Avengers which is written by Brian Michael Bendis, although you may need to check out Secret Invasion and Secret Invasion: Thunderbolts to know how they get there.