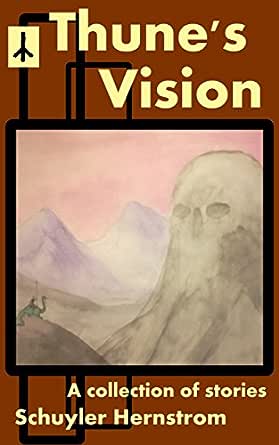 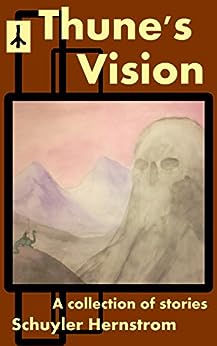 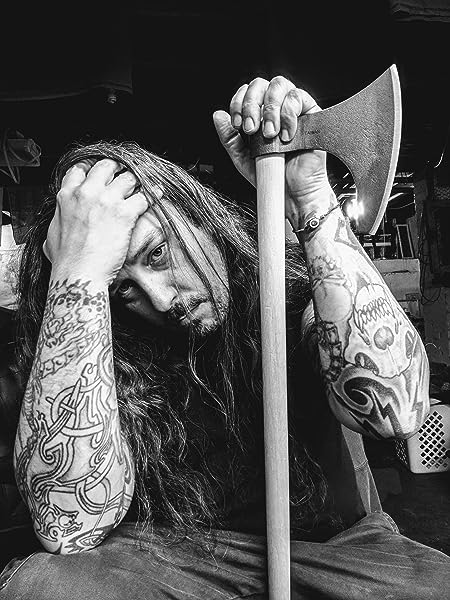 S. Craig Zahler (Crime, Western, Sci-Fi Author)Top Contributor: Board Games
4.0 out of 5 stars Poetic fantasy stories with scale, weirdness, and a sense of place akin to the old masters' works.
Reviewed in the United States on November 21, 2019
Verified Purchase
Thune's Vision is a 140-page collection of Sword & Sorcery tales from Schuyler Hernstrom and a delightful surprise for this reader, a long time fantasy fiction fan who is turned off by the plague of gigantism infecting the genre today.
Every single story in this is book good, especially the more fabular tales, "Challenger's Garland," which brings to mind Clark Ashton Smith (my all time favorite fantasist), and the wry, "The Ecology of a Unicorn."
Hernstrom's writing is terrific. Stories of honor, fate, gods, knights, barbarians, lizard men, and sorcerers are deftly sketched with his efficient, yet poetic prose, which contains few commas and excisable words. Like the writing in M. John Harrison's superb The Pastel City, many sentences feel crafted to stand on their own as things to relish. It's great to read a new fantasist doing something that feels so archaic, someone delivering entertainment with allegory, someone creating grand scale tales with depth and a real sense of place in so few pages.
Thune's Vision is possibly my favorite standalone fantasy book published since Brian McNaughton's notable Throne of Bones twenty years ago. And Hernstom's science-fantasy novella "Images of the Goddess" in Cirsova #2 is as good as the best of these tales, while also being a bit weirder and funnier.
Fantasy fans: Seek out this author's work!

H. P.
4.0 out of 5 stars A Collection from the Modern Master of Vancian Fiction
Reviewed in the United States on December 4, 2016
Verified Purchase
Schuyler Hernstrom wrote my favorite stories in Cirsova No. 1 and in Cirsova No. 2. So when the boys over at the Puppy of the Month Book Club announced that Hernstrom’s self-published collection of short fiction was their pick for November, I rushed out and bought it (figuratively; literally I was sitting at my computer the whole time). I wasn’t disappointed. The stories in Thune’s Vision might not rise to the heights of The Gift of the Ob-Men or Images of the Goddess, but Hernstrom is still the king of one particular corner of Retro SF and has shown he can consistently deliver.

The Challenger’s Garland
In which the champion of a physical manifestation of death makes his challenge, and Death always wins in the end. The titular challenger immediately calls up the image of Frank Frazetta’s iconic Death Dealer. (Although I also can’t imagine a Death attended by a giant crab without thinking of the Pulp Librarian.) It’s a good example of how Retro SF can draw from imagery imprinted on even the unlettered modern by the pulps, without being clumsy or overly sentimental about it. It also has one hell of a twist ending. Watching the original Twilight Zone episodes and reading Hugo nominees and the Magazine of Fantasy and Science Fiction over the past year, a killer twist is one thing you don’t see nearly as much in modern speculative short fiction.

Athan and the Priestess
In which a steppe warlord is convinced it is his destiny to swim under the barrier to another world and bring it down. Hernstrom is the master of the mini-epic. Who else can tell a truly epic tale in a short story? Athan and the Princess doesn’t have quite the breathtaking scope of The Gift of the Ob-Men, but it’s epic nonetheless. There is a suggestion that the magical barrier at issue that has split masculine and feminine societies has been to the detriment of both, although befitting Hernstrom’s work, no change will come without a price. It also has a tremendous, and freaking scary, scrape with sea monsters.

The Movements of the Ige
In which a dance-off among bipedal lizards is rudely interrupted by a crashing spaceship. This is a nice spot of sword and planet. The titular Ige feel more fantastical than alien, as they should, because the story is told entirely from their perspective. The spaceship may be manned by humans, based on the description, or not, but they’re treated as utterly alien because that is what they are to the Ige. As a story, though, this is the weakest in the collection.

The Ecology of the Unicorn
In which a wizard tries to cheat death and fairies, and death (and fairies) always wins in the end. Hernstrom is probably most often compared to Jack Vance. The Ecology of the Unicorn is the Vancian story in Thune’s Vision and suffers for it, as good as Hernstrom is. It works because it has the vast sort of thematic weight that Hernstrom is a master at fitting into just a handful of pages of fiction, but it doesn’t necessarily feel like a Hernstrom story. And that I can talk about “Hernstrom stories” tells that he’s doing something very right, and not just creating crude simulacra of the works of lost giants.

The Saga of the Adawolf (novelette)
In which a Germanic warrior is defeated and sent on the run, receives a boon and gets revenge and a crown, and the Roman Empire always wins in the end. The Saga of the Adawolf is the longest story in the collection (taking up about half the page length) and is another epic. It’s a grand tragedy. Given a boon by the All-Father, Adawolf’s existing skill as a warrior allow him to avenge the death of his family and his defeat at the beginning of the story. But his existing fatal flaws ensure a bitter end nonetheless. The scenes of Adawolf fighting with a magic spear are fantastic and remind me a lot of scenes in The Traitor Son of Gabriel fighting with a Wyrm-blessed ghiaverina. This is another story that feels BIG without needing either a huge word count or to wear BIG IDEAs on its sleeve. It’s by far the most historically grounded and low-magic of any Hernstrom that I’ve read, though. His wild imagination is always a highlight, but as The Saga of the Adawolf helps show, there are thematic depths to his work, dancing lizards and giant crabs or no.
Read more
7 people found this helpful
Helpful
Comment Report abuse

Richard Fisher
4.0 out of 5 stars A nice mix of genres showcasing this new talent
Reviewed in the United States on July 9, 2019
Verified Purchase
I've seen this title shared around on GR. I've wanted to read it, but with all the other books I already own, I forgot about it. Recently my friend Michael commented on one of my reviews, reminding me of this title. I looked it up, and couldn't pass up a paperback copy for $5. So here I am.

Challenger's Garland is the first story of the collection. Honestly it's my favorite. It's very, very short. Reminded me a lot of Darrell Schweitzer in tone and execution. Essentially it is becoming that which you fight. 5/5

Athan and the Priestess is next. This read more like a partially fleshed out outline. It just didn't feel complete, regardless it was enjoyable. The title of the collection is from a character in the story. 3/5

Next up is The Movements of the Ige. Strange, bizarre alien creatures fighting in emulation of the heavenly movements; living to fight and die. That is until a silver egg falls from the sky disrupting the harmony of the Ige. 3/5

The Ecology of the Unicorn is second to last. Malathiksos, the great sorcerer, has run out of time. Death is ready to collect, but Malathiksos has other ideas. Striving for an answer, he discovers that the unicorn may hold the key. Very reminiscent of Jack Vance's The Dying Earth. 3/5

Finally The Saga of Adalwolf. An eye for an eye, and all that goes with it are clearly displayed here. Where does the violence end? Seeking vengeance for the death of his family, Adalwolf is given the tool he needs. Getting carried away with the power he now possesses he grows blind and careless. 4/5

Well worth checking this collection out. I look forward to more from this author.