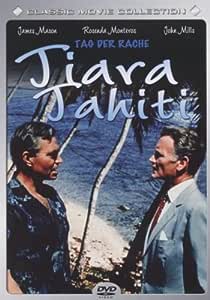 Germany released, PAL/Region 0 DVD: it WILL NOT play on standard US DVD player. You need multi-region PAL/NTSC DVD player to view it in USA/Canada: LANGUAGES: English ( Dolby Digital 2.0 ), German ( Dolby Digital 2.0 ), SPECIAL FEATURES: Interactive Menu, Scene Access, SYNOPSIS: In his first effort at directing a feature-length film, William (Ted) Kotcheff, best-known for movies like The Apprenticeship of Duddy Kravitz, does an excellent job in making this drama effective. He is helped in no small part by James Mason as Brett Aimsley, a sophisticated, at-ease former junior partner in a brokerage firm, and John Mills as Lt. Col. Clifford Southey, a former clerk in that same company. During the war, the lieutenant carries his sense of inferiority from his peacetime job as a clerk with him. So when he has a chance to nail Brett (a junior officer now) for trying to bring some censored goods back into London, he takes the chance and Brett is drummed out of service. Brett heads for Tahiti and a pretty good life in the sun, until Clifford shows up on the island with big plans to build a hotel -- bringing with him the same defensive attitude. SCREENED/AWARDED AT: BAFTA Awards, ...Tiara Tahiti (1962)

3.9 out of 5 stars
3.9 out of 5
35 global ratings
How are ratings calculated?
To calculate the overall star rating and percentage breakdown by star, we don’t use a simple average. Instead, our system considers things like how recent a review is and if the reviewer bought the item on Amazon. It also analyzes reviews to verify trustworthiness.
Top reviews

David from NC
3.0 out of 5 stars Watchable for Mason fans-Sir John Mills steals scenes too...
Reviewed in the United States on January 10, 2017
Verified Purchase
Watchable for Mason fans (like myself) but not "write home to moma about". I really like the chemistry between Mason and SIR John Mills (RIP Sir) but the movie seemed to end suddenly (?)
Read more
Helpful
Comment Report abuse

a movie fan
4.0 out of 5 stars kia orana
Reviewed in the United States on September 23, 2010
Verified Purchase
Ted Kotcheff must have had more of his movies go walkabout than any other significant director. Both this and his Australian masterpiece, Wake in Fright (sometimes called Outback in the U.S.) were rescued (via single prints) from the edge of oblivion. Unfortunately, this one survived in 16 mm, and, though decently restored, has limited visual quality as a result. Still, the performances, especially of James Mason, are delightful, and lovers of Pacifica will be enchanted to see the post-WWII Tahiti, before the tourist industry really struck (and its striking is one of the film's plot points). There is brief nudity, not found in American studio movies of that vintage, and Herbert Lom's character is more than a little culturally insensitive. The German subtitles are optional, of course, so the only barrier is the region code. Since there are scads of great movies unavailable in region 1, but common elsewhere, anyone without a region-free player might want to check out Oppo's region-free Blu-ray players, which also play just about any disc you're likely to own, including SACD and DVD-audio. Region coding is obnoxious and insulting, and I bless the Chinese for stabbing it in the neck.
Wake in Fright has also been restored and is finally available, in Australia's region 4 code. A big reason to thank Oppo.
Read more
19 people found this helpful
Helpful
Comment Report abuse

Kathleen
5.0 out of 5 stars James Mason at his comedic best
Reviewed in the United States on April 8, 2013
Verified Purchase
Many people don't realize the talent Mason had for light comedy, and this movie is one of his more comedic roles. The story is funny, the cast is excellent (Sir John Mills, Herbert Lom) and the scenery is beautiful. This is a sweet light comedy that is perfect for a day when you want to watch a light comedy. If you are a James Mason fan, this is a must-see. He is charming, handsome and at his comedic best. The smile you see on his face on the cover of the DVD tells it all; this movie is very sweet and I recommend it for those who enjoy light comedy and I highly recommend it for any James Mason fans. It's always nice to see him play something like this, that deviates from his more serious roles and shows his delightful sense of humor. You'll love it!
Read more
2 people found this helpful
Helpful
Comment Report abuse

Franksann
3.0 out of 5 stars Liked it, but wasn't Overly impressed
Reviewed in the United States on December 11, 2012
Verified Purchase
Don't buy this movie for the nudity which is brief. The movie's story line is good and the acting is also good. I like movies that leave you feeling vindicated...the kind of movie where the victim finds justice. If you're a James Mason fan you'll like this one. It's not one of his finest but it is fun to watch and I think most will enjoy it.
Read more
Helpful
Comment Report abuse

Amazn Customer 1028
3.0 out of 5 stars Not as good as I had hoped
Reviewed in the United States on May 29, 2014
Verified Purchase
The scenery is nice, but the story is not that great. Not bad, but there are too many better movies to spend your time watching.
Read more
Helpful
Comment Report abuse
See all reviews

Mrs G
5.0 out of 5 stars Colourful Escapism!
Reviewed in the United Kingdom on November 21, 2012
Verified Purchase
Two stalwarts of the 1950s/60s British film industry in an entertaining story of one devil-may-care and one very correct and pompous Englishman. They first meet in civilian pre-war life, then in the Army and finally in Tahiti, always as rivals in some way. Aimsley (James Mason) has an idyllic life there which is disturbed by the arrival of Southey (John Mills) who has plans for development.... Watch it on a wet Sunday afternoon and be transported to sunnier climes. High nostalgia factor for those who saw these stars in their prime, when you went to the local 'flicks' on a Saturday night!
Read more
One person found this helpful
Report abuse

St Colms
3.0 out of 5 stars MIlls Versus Mason
Reviewed in the United Kingdom on June 8, 2015
Verified Purchase
A bit dated now, but better than the Carry On films which followed, it is always good to see two very good British actors, James Mason and John Mills, take on comic roles, one as a cad and the other as an officer martinet, which goes from War time Europe to paradise in Tahiti.
Read more
Report abuse

R H Warwick
3.0 out of 5 stars James Mason
Reviewed in the United Kingdom on September 19, 2013
Verified Purchase
If your a fan of James Mason old films, then this is a good film.
Also the colour of the film makes me want to dash off to the location.
Not a bad film, but not a very good film either, or to put it another way its
OK.
But when is James Mason film "A Touch of Larceny" coming out
Read more
Report abuse