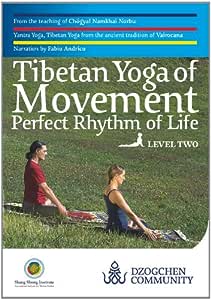 Senior Instructors Fabio Andrico and Laura Evangelisti, together with other Yantra Yoga practitioners, present traditional Yantra Yoga as they learned it from Dzogchen Master Chögyal Namkhai Norbu. Shot on location at the Temple of the Great Liberation in Arcidosso, Italy, this two-part series is meant as an inspiration to begin, renew, continue, and deepen daily yoga practice with qualified teachers. Viewers see Yantra Yoga practitioners gracefully yet powerfully move through this dynamic and unique system of Tibetan Yoga, as they get a taste of its deep and lasting physical, emotional, and spiritual benefits.

Yantra Yoga is one of the oldest recorded systems of yoga in the world. Its unique series of positions and movements, combined with conscious breathing, can help coordinate and harmonize one s vital energy so that the mind can relax and find its authentic balance. Yantra Yoga contains a wide range of movements that can be applied by everyone, and it is a superb method to attain optimal health, relaxation, and balance.

This DVD series covers the full spectrum of Yantra Yoga. Each volume contains two discs: the first features detailed instruction in the movements, while the second is to follow during practice. Level One includes beginning instruction on the three preliminary series, as well as the First Series of Yantras. Specific attention is placed on the way to begin and end a practice session. Level Two, designed for those already proficient at the first level, includes instruction on the remaining four series of Yantras and the Pranayama of Rhythmic Breathing.

About Fabio Andrico, Narrator: Fabio Andrico has been teaching yoga internationally for over 30 years. He is famous for using great skill, clear precision, and delightful humor to help students deepen their practice and understanding of yoga. Andrico began his career in the mid-seventies, when he studied Sivananda Yoga during a trip to India. In the following years, Andrico was exposed to many different yoga traditions. He ultimately met his teacher, Dzogchen Master Chögyal Namkhai Norbu, and had the rare opportunity to learn the Tibetan tradition of Yantra Yoga directly from this lineage holder. Andrico is both a Hatha Yoga and Yantra Yoga instructor, as well as an authorized trainer of Yantra Yoga teachers. He teaches Yantra Yoga internationally to groups of up to 700 participants in venue on six continents. Fabio Andrico has appeared in yoga DVDs worldwide, including The Eight Movements of Yantra Yoga and Breathe: The Perfect Harmony of Breathing, and collaborated on the best-selling book, Yantra Yoga: the Tibetan Yoga of Movement.

4.5 out of 5 stars
4.5 out of 5
6 customer ratings
How does Amazon calculate star ratings?
Amazon calculates a product’s star ratings based on a machine learned model instead of a raw data average. The model takes into account factors including the age of a rating, whether the ratings are from verified purchasers, and factors that establish reviewer trustworthiness.
Top reviews

Dewi S
5.0 out of 5 stars Awesome yoga practice from ancient lineage. A gem for yoga practice.
Reviewed in the United States on September 19, 2018
Verified Purchase
I'm trained as hatha yoga teacher and learning this Yantra Yoga has boost my practice to a higher level. The strong coordination of breath and movement, the movements, and the breath hold, help the practitioners to have sharp awareness, while increasing the flow of energy in their body to achieve greater balance and higher state of mind. The DVD is made very well with one DVD containing explanation and one DVD containing the practice. I'm looking forward to learn deeper aspects of this yoga in near future as I continue to practice.
Read more
Helpful
Comment Report abuse

Karemamc
5.0 out of 5 stars Unique and great movements
Reviewed in the United States on June 25, 2020
Verified Purchase
The movements and style of the programs, and the flow were interesting and enjoyable!!!
Read more
Helpful
Comment Report abuse

Konstantin
4.0 out of 5 stars Good but not complete
Reviewed in the United States on May 9, 2013
Verified Purchase
Systematic and clear. Not everything (the pranayama) what is in the book is shown here. Also more variations for people who are not able to do the full range exercise would be better, only a few are shown. Also explanations about what is actually the essence of the specific exercise regarding breathing and not only movement explanations or naming the holds. That would make it easier to adapt to your personal abilities.
Read more
2 people found this helpful
Helpful
Comment Report abuse

Scott Brusso
5.0 out of 5 stars Five Stars
Reviewed in the United States on May 4, 2018
Verified Purchase
Just what I was looking for
Read more
Helpful
Comment Report abuse

David Shankland
5.0 out of 5 stars Five Stars
Reviewed in the United States on September 2, 2014
Verified Purchase
Best instructional videos I have ever used and packed with more than advertised.
Read more
2 people found this helpful
Helpful
Comment Report abuse

Ratty
3.0 out of 5 stars Tibetan Yoga of Movement: Perfect Rhythm of Life - LEVEL TWO
Reviewed in the United States on June 25, 2013
Verified Purchase
I enjoy doing yoga once in a while and living in a place lost to the world this is a good oportunity
Read more
Helpful
Comment Report abuse
See all reviews from the United States

Page 1 of 1 Start overPage 1 of 1
This shopping feature will continue to load items when the Enter key is pressed. In order to navigate out of this carousel please use your heading shortcut key to navigate to the next or previous heading.
Back
Next
Pages with related products. See and discover other items: Best yoga for life