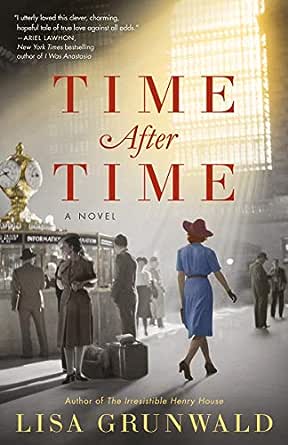 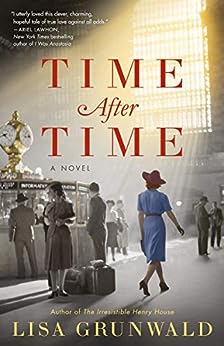 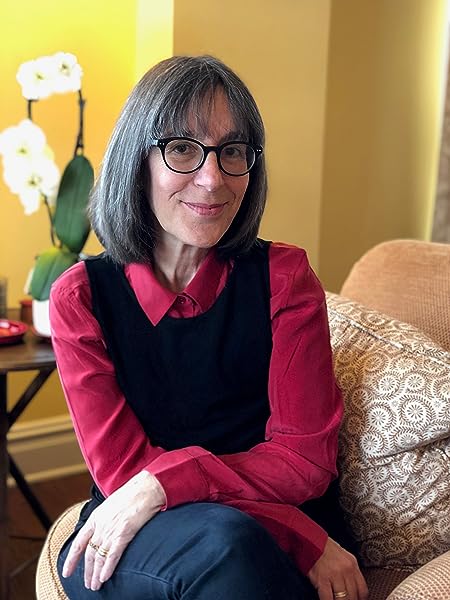 “In lively prose set against the fascinating history of Grand Central, Grunwald’s characters quickly solve the mystery of Nora’s disappearance. But making her stay is harder: she can never go more than a stone’s throw past the terminal. . . . It’s familiar territory to consider the lengths to which we’d go for love. But Grunwald asks a compelling question: How long would we stay in one place?”—Time

“Time After Time doesn’t just re-create the lost New York of the 1920s to 1940s, it inhabits it—and so will the reader, in the company of the book’s wonderful characters.”—Daniel Okrent, author of Last Call and The Guarded Gate

“Here is a glorious novel to savor and return to again and again. I fell in love with Joe and Nora, star-crossed lovers from a time when women wore gloves, men wore hats and a train ticket could change the course of your life. The spectacular Lisa Grunwald has written a classic story of fate, true love, art, and chance with truth and beauty. You will want to share it with every reader you know.”—Adriana Trigiani, bestselling author of Tony’s Wife

“Fans of historical fiction will savor Time After Time by Lisa Grunwald. . . . An unforgettable tale of otherworldly romance, Grunwald’s book is a true page-turner. Pick up a copy and prepare to be transported.”—Julie Hale, BookPage

“Grunwald crafts a delightful and engaging love story that unfurls alongside the fascinating history of Grand Central Terminal. . . . Despite the fantastical nature of Nora’s life, Grunwald never allows the supernatural to overpower the characters, their story, or the history swirling around them. Their love flourishes irrespective of time. Recommended.”—Historical Novels Review

“An ingenious and winsome novel.”—Kirkus Reviews

“A satisfying supernatural romance about lovers brought together across time . . . Readers who enjoyed Audrey Niffenegger’s The Time Traveler’s Wife will be enchanted.”—Publishers Weekly

“Fans of time travel romances like Audrey Niffenegger’s The Time Traveler’s Wife and Beatriz Williams’s Overseas will find much to enjoy.”—Booklist

“A World War II–set historical with a sprinkle of magic.”—Library Journal

“Lisa Grunwald has written my favorite kind of novel. Set within the wondrous boundaries of Grand Central Terminal, Time After Time is the story of Joe and Nora, the love they find amidst impossible circumstances, their fight to stay together, and the great sacrifices they make along the way. I utterly loved this clever, charming, hopeful tale of true love against all odds.”—Ariel Lawhon, New York Times bestselling author of I Was Anastasia

I WANT TO GO

She wasn’t carrying a suitcase, and she wasn’t wearing a coat. Those were the things that struck him when he saw her for the first time. It was just a bit after sunrise on a Sunday in early December. Joe was heading across the Main Concourse for Track 13, but there she was—­no bag, no coat—­standing by the west side of the great gold clock, peering into a window of the information booth. If she was traveling, then she was traveling light. If she was working at the terminal, then she was drunk, or she should have known better. No woman who worked at Grand Central would ever go near the guys in the booth at this hour, not at the end of a long night, when their shifts were finally over, and they were probably handing a bottle around.

Then one of them must have made a pass, because she stepped back quickly, and he could hear them barking and laughing as she turned to walk away. Joe saw how young she was, and how completely out of place she looked. Why was she here at dawn, and what was she doing without an escort? Still, she didn’t seem scared by the guys as much as frustrated, even angry. Her eyes were enormous and bright green, and her lips were the same kind of hard-­candy red as the stoplight on a signal lamp.

She stepped away from the stir she’d caused but stopped walking after just a few yards. A tramp standing on the marble staircase cupped a cigarette in his hand, flicked off the ash, and gave her the eye.

Joe hadn’t had his coffee yet, but he moved to her side in just a few steps. Her earrings might have been real pearls, and they dangled from glittering, flame-­shaped tops. But “princess”? Joe didn’t think so. Her pale-­blue dress was smudged and worn, and her shoes seemed old and scuffed.

“You look kind of lost,” he said to her.

Behind her, the tramp gave Joe the finger. Another guy whistled from inside the booth.

“Did you need directions?” Joe asked.

“Well, what did you need those guys for, then?”

“I was only asking them what happened to the bank on the lower level. One of them said there’d been a little fire, and they all started laughing and saying things like ‘Fire down below.’ ”

She looked at the ground, then back at Joe. “Do you think they could be drunk?”

“Oh, they could definitely be drunk,” Joe said.

“Want me to go chew them out?”

She tucked her hair behind her ears and lifted her chin just slightly. Joe realized she wasn’t just beautiful. There was something else about her, something vivid and exciting. She made him think of the cats in the tunnels far beneath the concourse: coiled up and waiting, all energy, no telling what they were going to do.

By now, the tramp had moved away, and the guys in the booth were leaving too—­disappearing one by one down the booth’s hidden corkscrew staircase.

“So, you know where you’re going?” Joe asked the girl.

That was the neighborhood near the East River, just blocks from the YMCA where Joe lived but miles beyond him in all other ways. Turtle Bay was a high-­class place with pale, private houses and rich, private people. That meant the pearls were real, Joe thought. But still this young woman seemed happy, even eager, to be talking to him.

Standing this close, he could smell her perfume: a blend of talcum and flowers and something sharper, like wood or whiskey. She was two or three inches shorter than he was. Her hair was a jumble of soft copper wires, and it fell at her neck in a cloud of curls. Her cheeks were smooth and pink, the same shade as the terminal’s Tennessee marble floors.

“So why do you need a bank at this hour?” Joe asked. “I thought they’d caught Ma Barker.”

She didn’t laugh at his joke. She reached into her dress pocket and pulled out a cushion of paper money. The bills weren’t green; they looked foreign. “This is all I’ve got,” she said. “I need to get it changed for American dollars.”

“There’s a branch a few blocks away,” Joe said. “But I don’t think it opens till nine. Where are you coming from, that you don’t have cash?”

“I do have cash. It’s just French cash.”

“Last I heard, they hadn’t laid any tracks under the Atlantic,” Joe said. “What train were you on, anyway? And why aren’t you wearing a coat?”

This time she laughed—­a wonderful, confident laugh, deeper than he would have thought possible for someone who looked so young. But she ignored all his questions.

He told her his name, and he asked for hers.

“Nora Lansing,” she said, extending her hand, as if he’d asked her to dance.

Joe shook it, but hastily let it go. “Your hand’s really hot. Do you feel all right?”

Carefully, he took her hand back, cupping it now in both of his, as if it were a butterfly. Its warmth seemed to spread from her hand into his, then traveled the length of his spine, like a current along the railroad tracks.

“Nice to meet you, Miss Lansing.”

Nora. It was an old-­fashioned name, and she did seem a little old-­fashioned. Her pale-­blue dress had a black collar, black cuffs, and swirly flat black buttons that looked like rolled-­up licorice wheels. What Joe knew about women’s clothing could fit inside an olive, but he knew the dress looked wrong somehow.

She leaned in closer to him.

“So, Joe, let me ask you this,” she said. “Is there any chance you could walk me home?”

“To Turtle Bay Gardens? What about the bank?”

“Well, I wouldn’t need to go there, see, if you could walk me home.”

Joe looked up at the gold clock and then back at Nora. “I wish I could,” he said. “Honestly. But I work here, and I’m late for a meeting, and right after that, I start my shift.”

The brightness in her eyes dimmed a bit. Joe realized, with some amazement, that he suddenly felt it was his obligation to bring the brightness back.

“Oh, you’re so nice,” Nora said. “But I can do that myself. I should have done it in the first place.”

By now the Main Concourse was starting to bubble and steam with the morning rush: workers and travelers in seemingly random motion, except for the subtle dance steps that kept them from bumping into each other. No one stopped, unless it was at the clock, the ticket windows, or the blackboard where Bill Keogh stood on a ladder and wrote out the times and track numbers in lemon-­yellow chalk.

“Are you sure you’re all right?” Joe asked Nora.

She circled her left wrist with her right hand. For just a moment, she looked confused, and he hesitated, reluctant to leave her. Then she said, resolutely: “Go ahead, Joe. You don’t want to be late.”

They walked off in opposite directions, and Joe checked the time as he hurried across the concourse. When he stopped to look back, he was half embarrassed, half thrilled, to see that Nora had done the same thing. Their eyes met the way their hands had: filled with heat and surprise. Finally, Joe turned to leave and, noting the time once more, he started to run.

Lisa Grunwald is the author of the novels The Irresistible Henry House, Whatever Makes You Happy, New Year's Eve, The Theory of Everything, and Summer. Along with her husband, Reuters editor in chief Stephen J. Adler, she edited the anthologies The Marriage Book, Women's Letters, and Letters of the Century. Grunwald is a former contributing editor to Life and former features editor of Esquire. She lives in New York City. --This text refers to the hardcover edition.
Read more