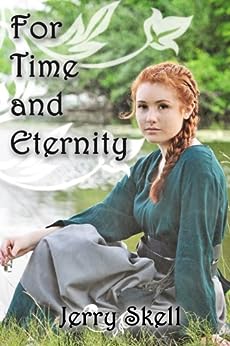 For Time and Eternity Kindle Edition

na --This text refers to an out of print or unavailable edition of this title.

3.6 out of 5 stars
3.6 out of 5
17 global ratings
How are ratings calculated?
To calculate the overall star rating and percentage breakdown by star, we don’t use a simple average. Instead, our system considers things like how recent a review is and if the reviewer bought the item on Amazon. It also analyzes reviews to verify trustworthiness.
Top reviews

Bethany N.
3.0 out of 5 stars Good but needs an editor
Reviewed in the United States on June 18, 2016
Verified Purchase
The storyline is great! A young woman, faced with losing her family and starting a new life.

However, the puncuation and grammar are horrible. I'm not sure Mr. Skell knows what a comma is. Several misuses of your/you're, birth/berth, knew/new, and others. A good editor would go a long way to making this a 5 star book!!!
Read more
2 people found this helpful
Helpful
Report abuse

Derek Simmons
1.0 out of 5 stars For Time and Eternity by Jerry Skell
Reviewed in the United States on June 25, 2017
Verified Purchase
After reading some of the reviews, I chose to read this book anyway. I was still surprised to encounter so many grammatical errors. I hope this the author's first attempt at publishing and will improve. The editor and publisher did not do their jobs either. I was unable to determine the genre. It seemed to change.
Read more
One person found this helpful
Helpful
Report abuse

Vicki Martinson
4.0 out of 5 stars A story of new beginning, courageous women, strong ties between family and friends
Reviewed in the United States on March 3, 2014
Verified Purchase
This was a heartwarming story of not one but several women. In an effort to establish a new settlement to escape the harsh treatment of the world they live in, the book starts with a teenage girl losing her father, her only parent. She is being hunted by the rulers guards and must flee the area alone in order to survive. She has no idea why other than that she is 'different'. She seeks help from a neighbor boy she knows from school and together they set off to find a place of safety to settle down. During the journey, they fall in love and discover their heritage. They are finally assisted by members of their clan that they didn't know existed and venture to a new world and establish a society of equality for those that wish to work, live and thrive without interference from harsh, prejudiced royalty. They find love, friendship, and confidence in establishing this society but not with fighting to defend what they have established. The women of this society are warriors as well as the men and save the day when attacked by pirates hired by the royal rulers they once fled. An exciting, warm, loving story of determination and success.
Read more
4 people found this helpful
Helpful
Report abuse

Maizah Tauqeer
5.0 out of 5 stars Best book ever
Reviewed in the United States on July 22, 2017
Verified Purchase
I think this book was truly amazing .it had the perfect.mix of adventure,hotel,romance,love everything like a.perfect cake with the right amount of.ingredients!!!!!
Read more
Helpful
Report abuse

Gretchen
4.0 out of 5 stars Joining Jamie's Adventure
Reviewed in the United States on February 17, 2014
Verified Purchase
This is a quick moving action packed epic story as you follow Jamie and her quest to find true, enduring love throughout the trials and tribulations of her life.
Read more
2 people found this helpful
Helpful
Report abuse

Mary K. Manson
4.0 out of 5 stars She is strong woman who has to endure alot of challenges in this book.
Reviewed in the United States on March 14, 2014
Verified Purchase
The author really creates a whole new world in this book. The love story between Jamie and Derek is supportive, frisky, romantic and will stand the test of time. I really enjoyed the women warriors and how strong they are. This book will teach women that they can do anything and can be independent and follow their dreams and still have a husband and children. Some of the details are too in depth for me, but it definetly teaches you new terms. I enjoyed this book very much.
Read more
2 people found this helpful
Helpful
Report abuse

Romance Reader
2.0 out of 5 stars Pity there’s so many errors: this could be a 4* read.
Reviewed in the United Kingdom on September 18, 2019
Verified Purchase
This is my first book by this author. Although I did enjoy the story, I was frustrated by the amount of spelling mistakes, poor grammar & missing punctuation. It really spoilt the story & I had to re-read parts. It is a good thing the Kindle (App) allows the reader to notify the publisher of any errors, but really, this book should have been better proof-read & edited (mine was the second version). I did not report some of the strange phrases: I am assuming the writer deliberately wrote them to convey the way the people (Roamys) speak. I feel the language used was quite simple in some areas, & I do wonder, coupled with the frequent errors, whether English is not the author’s first language. Having said that, there were parts of the book where there were lots of facts & descriptions given, as though it was written by a different person!I am not sure what period in time this book is set in. The prologue says “ 60yrs since the last contact with earth”, which makes it sound like it is set in the future in a distant planet from Earth, but I felt it was more “backward”, as though it was set in the past with “smiths” (blacksmiths), “wagons” & “Guilds”.

The Roamys are looked down upon by the “Firsters” & the people living on Planet Draco. They are treated as slaves & are not allowed to own property or join guilds. The Roamys decide to revolt against the Imperials & Magisterium, & set off to establish their own land/ country, but the Imperials follow: they want to crush the rebellion.

The book mainly follows 3 Roamy couples, who suffer hardships alone until they meet their other halves: Derek & Jamie; Roland & Rosalind (Derek’s sister); Sophie & David. They are all on the run from the Imperial Guards (of which David was one until he became a deserter). They fight for their freedom & independence.

I liked the characters: the men were strong, handsome & thoughtful, even though they were sometimes slow to grasp their wives’ intentions; the women were fiercely independent, willing & able learners/ workers. However, I found it unbelievable that they (the women) were such good learners: they all very quickly learned to play a variety of instruments, cook, bake, run a business, & become able huntresses.

This book has no swear words or bedroom scenes. Those were glossed over or hinted at. However, there’s violence, whether domestic abuse, rape or fights.

My advice to the author would be to get a proper proof reader &/ editor: this book could easily be 4*.
Read more
Report abuse

Patricia Wilson
4.0 out of 5 stars Four Stars
Reviewed in the United Kingdom on June 30, 2017
Verified Purchase
Not bad not as gripping as I thought it would be
Read more
Report abuse

janet thomas
5.0 out of 5 stars Five Stars
Reviewed in the United Kingdom on July 3, 2017
Verified Purchase
Wonderful read couldn't put it down
Read more
Report abuse
See all reviews
Back to top
Get to Know Us
Make Money with Us
Amazon Payment Products
Let Us Help You
EnglishChoose a language for shopping. United StatesChoose a country/region for shopping.
© 1996-2021, Amazon.com, Inc. or its affiliates