Secure transaction
Your transaction is secure
We work hard to protect your security and privacy. Our payment security system encrypts your information during transmission. We don’t share your credit card details with third-party sellers, and we don’t sell your information to others. Learn more
1-Click ordering is not available for this item.

Visit the Electronic Arts Store
Platform : PlayStation 4 |
Rated: Mature
4.6 out of 5 stars 3,409 ratings
Available at a lower price from other sellers that may not offer free Prime shipping.
In Stock.

Sold by BRAND MAX and Fulfilled by Amazon. 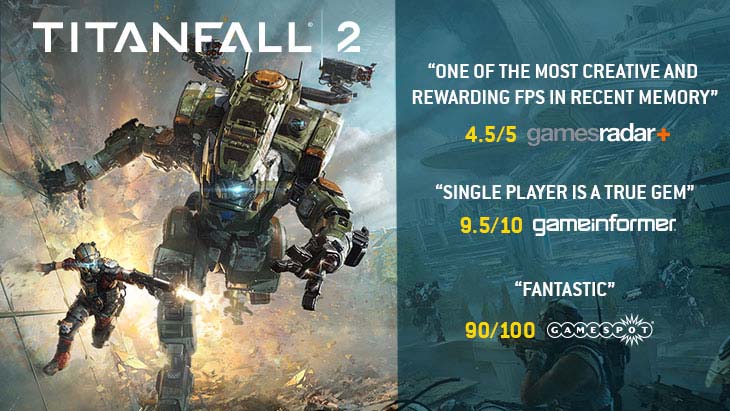 4.6 out of 5 stars
4.6 out of 5
3,409 global ratings
How are ratings calculated?
To calculate the overall star rating and percentage breakdown by star, we don’t use a simple average. Instead, our system considers things like how recent a review is and if the reviewer bought the item on Amazon. It also analyzes reviews to verify trustworthiness.

Brandi
2.0 out of 5 stars I was so excited to try this game.
Reviewed in the United States on October 9, 2018
Platform: PlayStation 4Edition: StandardVerified Purchase
I might be an old lady, but I love my video games. I've played a ton of them (all the Bioshocks, Uncahrteds, Assassin's Creeds, Mass Effect, the Wolfensteins...) and I'm not going to win any tournaments but I'm definitely not the crappiest player out there, either. Titanfall looked amazing and I was dying to play it, but online multiplayer is just not for me. So I was so happy to find out Titalfall 2 had a single-player mode...until I played it. :( The world is expansive and gorgeous and the story seems engaging, but OMG all the freaking parkour crap did me in. I played (and replayed and replayed) the first section of the first half of the first on-world scenario and gave it up. The control for the constant wall-jumping garbage was so inconsistent and ENDLESS that I wanted to hit a developer with my controller. It was absolutely maddening. And my hands were unbelievably sore the next day from trying so hard to nail it.

I'm glad a lot of people enjoyed this game, but if you struggle with this sort of thing (like I usually don't!) just be aware it's a PITA. Ugh.
Read more
21 people found this helpful
Helpful
Report abuse

Dan
5.0 out of 5 stars An Actual Review
Reviewed in the United States on October 27, 2016
Platform: PS4 Digital CodeEdition: Standard
The people below are mad because they were hoping to get their download before the game actually releases. Try those codes again during the release window and in the future, do not write a review for a product you haven't played. Reviews are for reviewing, not whining. I got an early relase copy of this game and I have to say it is AMAZING! The multiplayer is fast and fluid but also at times slow and methodical. Well thought out balance between the mechs and the pilots, very tense gameplay. A cut above the original release for sure, I look forward to playing for a while to come!

It should be noted that if you are looking for coop, this is not your game. Single player campaign is solid and fun and multiplayer is why this game is developed but no coop at all.
Read more
292 people found this helpful
Helpful
Report abuse

Joseph Henriquez
5.0 out of 5 stars Just a really fun game
Reviewed in the United States on July 27, 2018
Platform: PlayStation 4Edition: StandardVerified Purchase
I am really enjoying this game and I really didn't think I would.

I bought this game only for the single player campaign and because it was only 10 bucks on amazon and I am happily surprised by both the gameplay and story. Well, okay, I shouldn't say the "story" is good, it's just some Sci. Fi. B.S. Briefly, there's a war or something going on and you are normally a rifleman that wants to be a pilot (of the big mechs called titans) and then becomes a pilot due to the death of the previous pilot (a promotion is a promotion, I guess). You then become responsible for finishing up the mission of another pilot that also died because the bar for pilot admission is apparently very low.

The shooting is pretty good but, and this has been talked about before, the movement is the most fun. Pilots get these jump packs which allow them to do extended wall runs and double jumps and this turns every fighting area into a giant fun house. It also begs the question why wouldn't...the...uh... "good guys" just give all their combatants the jump packs? Wouldn't that mean your fighting force, titan or no, would be more effective? Just saying. Anyway, running around the map like a methed out squirrel is always fun, but I do feel that sometimes the movement feels a bit uncontrollable which makes going right where I want to go a bit tricky. Then again, I can't imagine moving like that would be very controllable anyway.

My only issue is that sometimes I get audio clipping when there is a lot of gunfire/explosions happening simultaneously. The only issue is that it can make locating gunfire difficult as I use headphones to help me locate enemies.

Dan
5.0 out of 5 stars Great campaign, great multiplayer, free DLC. Amazing game.
Reviewed in the United States on February 21, 2017
Platform: PlayStation 4Edition: StandardVerified Purchase
This is not only one of the best FPS titles i've played in a long time, it's one of the best games. I was caught totally off guard by how much I enjoyed this game. It takes everything that was good about TF1 and expands and fine tunes it. They even added a full single player campaign/story mode that is actually fantastic. Then of course the addictive multiplayer. So easy to jump and start learning, as most if it will feel very familiar to the average FPS player. But the mechanics and features are complex enough that you have room to explore whats possible and really master getting around. It's just so fluid, responsive and reliable. Momentum is your friend here, and so are the various gadgets you can choose from. Like the newly added grappling hook which when used properly in conjunction with jumps and wall runs can propel you across the entire map, if you know what you're doing. Or at least yank yourself out of the way from a stomping Titan coming your way. The guns are all fun to learn and have their own clear strengths and weaknesses. There is a good amount of customization for your pilot and your own Titan, but if I had to ask for one thing it would be more visual customization to our appearance, other than just camo paint jobs. Depending on what class/ability you go with, your pilots gear changes, and then you customize the paint job over that.

Not to mention.. FREE DLC! No paying $40-50 for a season pass just to get content that should have been in the final product anyways.. they are giving all DLC at no cost through out the year. That is amazing. All in all, this game is a breath of fresh hair and I couldn't be more excited to stick with this franchise and see where it goes.
Read more
13 people found this helpful
Helpful
Report abuse
See all reviews

Briski
5.0 out of 5 stars Titanfall 2 . I’ve not seen 1 yet .
Reviewed in the United Kingdom on January 8, 2021
Platform: PlayStation 4Edition: StandardVerified Purchase
I bought this as a present for a family member and have not seen it since ! . I am told it is a computer game whereby titans fall twice . If anyone knows what it’s about don’t tell me . But I’m told it’s good . It’s in s box with a disc . Get ordering .
Read more
Report abuse

Chris
3.0 out of 5 stars It's okay 5/10
Reviewed in the United Kingdom on November 7, 2020
Platform: PlayStation 4Edition: StandardVerified Purchase
It's an okay game. Not sure why everyone says the story is so amazing? It was just an average decent FPS in my opinion, not bad but nothing special. Worth the £15 I paid for it but not much more.
Read more
Report abuse

G B
1.0 out of 5 stars French Version no use as gift
Reviewed in the United Kingdom on January 3, 2021
Platform: PlayStation 4Edition: StandardVerified Purchase
I'm sure the game is great, but the French version was delivered so not able to give as gift. Seller did not state that the packaging/case, etc was in French, and would not buy from them again. Very disappointed.
Read more
Report abuse

Mystery
5.0 out of 5 stars Best fps in years
Reviewed in the United Kingdom on November 2, 2018
Platform: PlayStation 4Edition: StandardVerified Purchase
I never expected a sequel to a multiplayer only game to have such a great campaign. Although it's not the longest campaign(5-6 hours or so) every part of it is enjoyable with no filler or repetitive elements whatsoever. Every level has it's own style and gimmick that I won't spoil here.

I've not bothered with the multiplayer so I can't judge that. But I'd still recommend it on the singleplayer alone.
Read more
Report abuse

Mum of 5
5.0 out of 5 stars Masterpiece!
Reviewed in the United Kingdom on July 3, 2019
Platform: PlayStation 4Edition: StandardVerified Purchase
Bought this for my son! This review is his really not mine as I haven’t played it. It’s good detailed graphics! Story line is awesome, he loves it. 10/10 thank you
Read more
Report abuse
See all reviews

Page 1 of 1 Start overPage 1 of 1
Previous page
Next page
Pages with related products. See and discover other items: video console system, carry out, electronic arts video games, cool zone, ps4 multiplayer game, play station 4 games
Back to top
Get to Know Us
Make Money with Us
Amazon Payment Products
Let Us Help You
EnglishChoose a language for shopping. United StatesChoose a country/region for shopping.
© 1996-2021, Amazon.com, Inc. or its affiliates