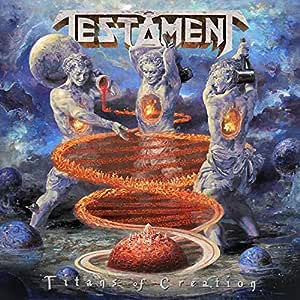 Customers who bought this item also bought these digital items

What digital items do customers buy after viewing this item?

Returning with their thirteenth studio album Testament's "Titans of Creation" contains twelve tracks of unstoppable energy from these originators of Bay Area Thrash! Loyal to the roots of the genre they helped define Testament bring alluring brilliant and progressive ingredients to this new release an exciting new album in their consistently heavy and inspiring cannon

4.9 out of 5 stars
4.9 out of 5
27 customer ratings
How does Amazon calculate star ratings?
Amazon calculates a product’s star ratings based on a machine learned model instead of a raw data average. The model takes into account factors including the age of a rating, whether the ratings are from verified purchasers, and factors that establish reviewer trustworthiness.
Top Reviews

Kevin Dudley
5.0 out of 5 stars A terrific slab of Bay Area thrash that has something to offer all Testament fans
Reviewed in the United States on April 3, 2020
Format: Audio CDVerified Purchase
Testament released their 13th studio album "Titans of Creation" on 4/3/20. It follows 2016's "Brotherhood of the Snake" which while written, recorded, and arranged in a hurry turned out to be in my opinion quite an excellent (and super thrashy) release. "Titans of Creation" shares more in common stylistically with 2012's "Dark Roots of Earth" in terms of variety and the overall approach to the songwriting though "Titans of Creation" is heavier overall. The band had much more time to work writing and arranging "Titans of Creation" and as a result the proceedings sound more collaborative than on their last release.

While I have been listening to Testament since 1987 (because I am old), my favorite release of the band is still 1999's "The Gathering". While "Titans of Creations" does not topple "The Gathering" in my opinion, it will definitely please old school fans while also offering plenty to modern thrash metal fans as well.

Highlights include the lead off single "Night of the Witch" which is one of the heaviest tracks on the album. Eric Peterson (guitars) delivers some black metal tinged vocals during the chorus of this track which adds a nice counterbalance to vocalist Chuck Billy's gruff but powerful delivery.

The opening track "Children of the Next Level" sounds like it could have been on 1988's "The New Order" while the following track "WWIII" reminded me of 1994's "Low".

"Dream Deceiver" also surprised me with how melodic the chorus was which brought me back to the days of 1992's "The Ritual".

I also really like brilliant bassist Steve Di Giorgio's kicking off "Ishstar's Gate" which is a very cool uptempo rocker. Steve also gets a cool bass intro to "Code of Hammurabi".

Fans of "The Gathering" will like the track "Curse of Osiris" quite a bit as it sees Chuck doing more of his death metal growl along with a fast frenetic pace.

To be honest I like every track on this album. Whether it was the band's intention going in or not, I feel that "Titans of Creation" represents all periods of the band quite nicely. Alex Skolnick delivers some of his best leads on this album, Gene Hoglan does his usual intricate yet pummeling work on drums, and Chuck Billy sounds better than ever. Eric Peterson continues to be one of the most underrated rhythm guitarists and songwriters in metal.

My only small quibble is that the final track "Catacombs", which is only a couple of minutes long (and was used by the band for intro music to their "Brotherhood of the Snake" tour), would have worked much better kicking off the album.

IRONHORSE
5.0 out of 5 stars THRASH TITAN'S DELIVER THE GOSPEL🤘
Reviewed in the United States on April 3, 2020
Format: Audio CDVerified Purchase
Chuck Billy and the boys have done it again! With "Titans Of Creation" Testament have given the world another instant classic Thrash Metal Album! This ranks right up there with the best the band has ever done. Track#1 "Children Of The Next Level" kicks things off with a infectious riff, awesome drumming, thunderous bass, great lyrics and vocals (Mr. Billy has never sounded better) then come guitar solo time it flat out smokes! Then the band maintains that level of expert musicianship song writing, vocals and performance throughout until the last sounds of "Catacombs" the final track floats into the mist! Also the Albums production is KILLER! So what you get are 12 tracks of great Thrash Metal by one of the greatest bands the bay area scene ever produce! An all around class act in every way!
Read more
4 people found this helpful
Helpful
Comment Report abuse

2ndHalf
5.0 out of 5 stars Fight me.
Reviewed in the United States on April 4, 2020
Format: MP3 MusicVerified Purchase
No other band has held up through the full thrash era like Testament. Megadeth, Metallica, Exodus, Death Angel, Slayer, Anthrax, I.. I mean, I'm getting depressed over here.
Read more
5 people found this helpful
Helpful
Comment Report abuse

ams
5.0 out of 5 stars they found thier old fury!
Reviewed in the United States on April 6, 2020
Format: Audio CDVerified Purchase
this is one of the greats equal to exodus and overkill latests releases, my favorite since formation of damnation which was awe ome!!! the best since LOW! they have found the old school testament again finally many of the old thrash bands lost their way or fury of the old days but they got it here! no chance of disappointment they are fast furious and brutal like the days of old.
Read more
Helpful
Comment Report abuse

MFP
5.0 out of 5 stars Best of the year!
Reviewed in the United States on April 6, 2020
Format: Audio CDVerified Purchase
I believe that this is one of the best metal releases of the 21st century! Great production, totally crushes and not a week track. Definitely metal album of the year!
Read more
One person found this helpful
Helpful
Comment Report abuse

Yvonne
4.0 out of 5 stars Fits in with the 80s spirit live and well. I’m so glad thrash is going strong again
Reviewed in the United States on April 8, 2020
Format: Audio CDVerified Purchase
Thrash’n! I’m old school from the beginning I was in junior high when I first started hearing Bay Area thrash starting with kill em all. This album has the old thrashing feel. I recommend it to you other old guys starving for good ole music!
Read more
Helpful
Comment Report abuse

William S Weaver II
5.0 out of 5 stars Great metal release
Reviewed in the United States on April 3, 2020
Format: Audio CDVerified Purchase
Another solid release I will listen to it over and over again
Read more
One person found this helpful
Helpful
Comment Report abuse
See all reviews from the United States