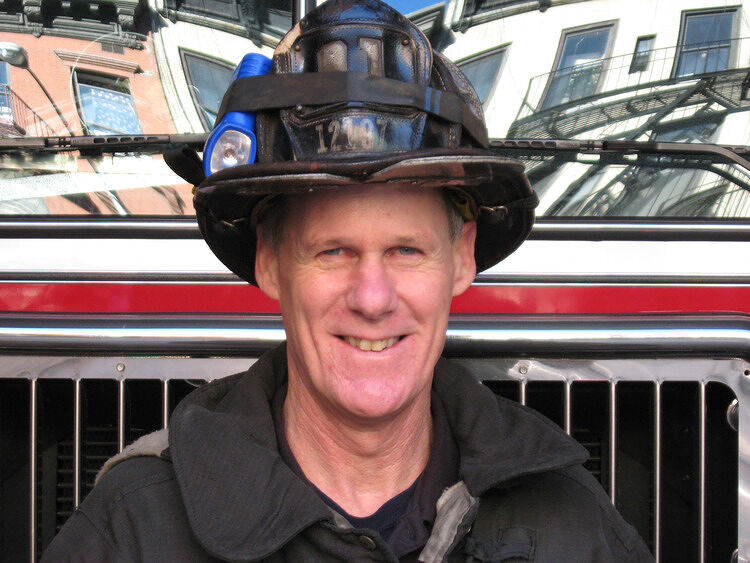 by Tim Hoppey (Author), Kimberly Hoffman (Illustrator)
4.4 out of 5 stars 10 ratings
See all formats and editions
Sorry, there was a problem loading this page. Try again.
A New York firefighter answers an emergency call but he cannot speak Spanish. A neighborhood boy translates and is an honorary bombero for the day. Story told in English with sprinkling of Spanish throughout.
Read more
Previous page
Next page

Set in Spanish Harlem and written by a New York City firefighter, Tito, the Firefighter / Tito, el bombero, is the story of how the ability to speak two languages is a valuable asset. Tito speaks both English and Spanish. He is also a great admirer of the neighborhood firefighters, or bomberos. He makes friends with Richie, a firefighter, and hopes to be able to ride in the fire truck someday. Little does Tito imagine that his bilingual ability will help the bomberos save the day. He gets to realize his dream of being a firefighter (if only for a day) when he interprets a plea for help from a Spanish-speaking man into the English the firefighters can understand.

Tito's personality shines and his ready assistance is a lesson in good citizenship. Not only is his bilingual ability an advantage, but it actually proves a necessity in a potentially dangerous situation. Children will love the excitement of this embedded bilingual story. They will imagine themselves in Tito's place and come to appreciate his linguistic ability and helpful attitude.

This story is presented with embedded Spanish text. Take a story in English and sprinkle in a little Spanish. The word is first introduced in English and then reiterated in the same sentence, or in the same paragraph, in Spanish. Once the word is introduced, it is used in both languages within the context of the story. Illustrations, context and the different color ink with which the embedded words are printed, aid in making the leap from one language to another. A keyword vocabulary page is included in the back of the book to help with learning in either language.

Kimberly Hoffman is an illustrator and a graphic designer who lives in Venice, California. She holds a Bachelor of Science degree in Design Communication from the University of Minnesota. Ms. Hoffman has traveled and lived in Ghana, Zambia, and Zimbabwe, Africa. Zimbabwe's culture has inspired her and she hopes to co-author a children's story with her husband using this setting. When not busy with her artwork, Kimberly enjoys movies, bicycling, and Zabel, her orange-striped cat. Tito, the Firefighter / Tito, el bombero is her first published children's book.

For over nineteen years, Tim Hoppey has worked as a New York City firefighter. He is stationed in East Harlem, which is the setting for Tito, the Firefighter/Tito, el bombero. Firefighting has inspired many of the children's stories he has written over the years and two books of poetry, Subterranean Angels (Everett Press) and Where There's Smoke (Argonne House Press). He received a B.A. in English and History from Hobart College in Geneva, NY. When he's not fighting fires, he spends his time teaching his boys the finer points of lacrosse, sending money to his daughter in college, and working on his wife's latest home improvement project. Tito, the Firefighter/Tito, el bombero is his first published children's book.
Read more

Henry Berry
4.0 out of 5 stars young boy learns about work of firefighters
Reviewed in the United States 🇺🇸 on May 29, 2005
The text is not in the two languages of English and Spanish, but rather the bilingual eight-year-old Tito uses some Spanish words in telling his story. Passing in front of a firehouse in Spanish Harlem, Tito sees a man gesturing excitedly and speaking Spanish to one of the fireman. Tito interprets what the man is saying: he saw coming from a window. Then Tito goes with the firemen in their truck to investigate. It's only a pot of rice smoldering when it was left on a stove by a woman when she fell asleep in her apartment. But the incident gives Tito the chance to learn what firemen are like and see how they react to a fire. Tim Hoppey, the author of this simple children's tale, is himself a fireman, who was involved in the 9/11 rescue efforts. Ages 3-6.
Read more
Helpful
Report abuse

Harold McFarland
HALL OF FAMEVINE VOICE
4.0 out of 5 stars Well done storyline with some Spanish vocabulary
Reviewed in the United States 🇺🇸 on April 30, 2005
Written in English but introducing 17 Spanish words, Tito, the Firefighter is the story of a young boy who lives in East Harlem where most of the residents speak Spanish as their first language. Tito wants to be a firefighter but he is too young. Finally he finds an opportunity to help the firemen when a person needs help but cannot speak English. An inspiring book for young children and a good way to learn Spanish vocabulary, Tito, the Firefighter is a recommended read.
Read more
Helpful
Report abuse

Rebecca Brown
5.0 out of 5 stars for every kid who loves fire engines
Reviewed in the United States 🇺🇸 on April 23, 2006
Rebeccasreads highly recommends TITO THE FIREFIGHTER / TITO EL BOMBERO as a charming bilingual tale about a New York boy who helps a fire station answer a Spanish speaker's call for help, & then gets to ride on the fire engine.

Barbara A. Mascaro
5.0 out of 5 stars Promoting positive community involvement ...
Reviewed in the United States 🇺🇸 on October 6, 2005
The concept of promoting positive community involvement is explained to children through this bilingual picture book, written by a New York City firefighter. This book highlights the fact that firefighters are important members of a community. Bold, bright illustrations complement the simple text that is well suited to emergent readers. This book is sure to appeal to children and would be a solid addition to bilingual picture book collections.

Joanne Wilson
5.0 out of 5 stars Big Adventure!
Reviewed in the United States 🇺🇸 on January 11, 2006
Sure, there are fire trucks and firefighters, and big adventure...enough on their own to capture any five-year-old's attention. As a mom, it was my little boy's immediate interest in the Spanish words and phrases that captured mine. Woven into this delightful children's storybook was my son's first Spanish lesson, and a golden opportunity to discuss cultural differences, and how our lives are enriched when we all work together. Thank you, Tim Hoppey.
Read more
Helpful
Report abuse

Ellen H. Cabana
5.0 out of 5 stars !Un Libro Excelente! An Excellent Book!
Reviewed in the United States 🇺🇸 on April 25, 2005
What a great story! Children always love a book in which the child becomes "the teacher" and helps out the adult. The look on Tito's face as he translates for Richie, the firefighter, is priceless...Even more so when he returns from his adventure! Tito lives out every little boy's dream.

The bright full-page illustrations are filled with detail, right down to the page numbers inside a fire shield. My students cheered for Tito, the Firefighter!
Read more
One person found this helpful
Helpful
Report abuse

Catherine J. Casler
5.0 out of 5 stars Tito - a winner!
Reviewed in the United States 🇺🇸 on April 28, 2005
"Tito, the Firefighter" is a great example of bi-lingual books for early readers! The repetitive language patterns in both English and Spanish allows young readers to easily interpret meanings. Using firemen and fire engines is a good method for gaining the attention of children. Additional titles of this caliber are needed in our libraries!