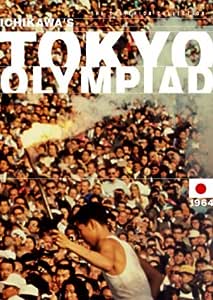 A spectacle of magnificent proportions, Kon Ichikawa's Tokyo Olympiad ranks among the greatest documents of sport ever committed to film. Utilizing glorious widescreen cinematography, Ichikawa examines the beauty and rich drama on display at the 1964 Summer Games in Tokyo, creating a catalogue of extraordinary observations that range from the expansive to the intimate. The glory, despair, passion, and suffering of Olympic competition are rendered with lyricism and technical mastery, culminating in an inspiring testament to the beauty of the human body and the strength of the human spirit.

3.5 out of 5 stars
3.5 out of 5
18 customer ratings
How does Amazon calculate star ratings?
Amazon calculates a product’s star ratings based on a machine learned model instead of a raw data average. The model takes into account factors including the age of a rating, whether the ratings are from verified purchasers, and factors that establish reviewer trustworthiness.
Top Reviews

jazz man
5.0 out of 5 stars Tokyo Olympiad
Reviewed in the United States on March 4, 2014
Verified Purchase
Bought for a friend he likes this film and mention the quality of Criterion is excellent as always ,highly recommended .
Read more
Helpful
Comment Report abuse

hughb
5.0 out of 5 stars Tokyo Olympiad
Reviewed in the United States on April 30, 2012
Verified Purchase
Product was exactly as promised - mint condition of both the packaging and DVD. Fantastic version of a product I've been looking to give as a gift to my father. He's been searching for a copy since he first saw it as a boy in the 60's. Practically impossible to find in Australia.
Read more
Helpful
Comment Report abuse

Jrum C.
5.0 out of 5 stars Since Tokyo Olympics delayed for a year . . .
Reviewed in the United States on April 15, 2020
. . . thought what a perfect time to finally acquire this Criterion, of the '64 games there. Had first tried to find older release ('02), but prices were much higher -used!- then this newer, special-feature laden release. Will re-visit review once I actually acquire dvd in June. (yeah, I know: "why submit review on somethin' you don't yet have?" Well, I am just excited I can both satisfy Olympic itch -without the modern "human interest" element- and have a classic, highly acclaimed film in a new Criterion release. Life. Is good. We just gotta get past this virus business. Together . . . :)
Read more
One person found this helpful
Helpful
Comment Report abuse

Lyman Green
5.0 out of 5 stars Amazing film
Reviewed in the United States on April 27, 2007
I was not really sure what to expect, but I have to say that now having watched this DVD, I think Tokyo Olympiad has muscled its way up into my list of all time favorite documentaries. The artful approach to recording the events of the 1964 Toyko Olympics is masterful.

My own favorite moment: the slow-mo 800 meter women's. Ichikawa had two cameras on the scene, and it is the mesmerizing second view of the legs of the runners that gripped me. The fluidity of motion, the definition of their muscles, clearly evident. The front-runner, legs pistoning in a seemingly perfect rythym, seems in control. And then, from the left side of the screen, (keep in mind, in this shot we're seeing mostly just waist down shots of the legs of the runners) Ann Packer's legs come into the shot, moving faster than all the others on the screen. She blows by them all, to win the race. It's a masterful moment for Packer, and a gorgeous scene in the movie.

Second best: Ichikawa takes full advantage of the 2.35:1 widescreen format and there is a huge pull-back showing the entirety of Mt. Fuji. One of the torch runners passes in the foreground. As Crowie mentions in the commentary the runner is reduced to bug-size by this. It is a breath-takingly beautiful sight.

Kockenlocker
5.0 out of 5 stars Greatest of All Olympic Films
Reviewed in the United States on June 14, 2002
I am ordering this post-haste.
I had the extreme thrill of seeing this film several times on the huge movie screen of a theatre Toho operated in Los Angeles when the film was released. About five years ago, I saw it in a smaller theater and it holds up wonderfully.
This is one of the most majestic films I've ever seen, but it is also dramatically compelling with sequences that will always be memorable. Perhaps most memorable is the real sense of caring and comradre among ALL the athletes AND spectators. Since these Olympics, the games have degenerated into political doo-dah of the worst sort. These games and this film have a dignity, humaneness and spirit that has all but been lost.
This is worth owning just for the Ethiopian's winning of his second Olympic marathon in a row. I seldom care about sporting contests, but the marathon literally had me grasping the theatre seat and verbally pulling for this incredible man--who along with Ali--is the greatest athlete I've ever witnessed.
The American version praised by another reviewer here, was IMO one of the worst desecrations of a masterpiece I can imagine. It was cut from the almost three-hour original version to about 90-minutes and accompanied by the most inane sports announcing ever. If you saw this atrocity, you haven't seen "Tokyo Olympiad."
If you are an Olympic fan or love breathtaking, intelligent and humane filmmaking, Ichikawa gives you the royal treatment in this film.
Thank you, Criterion, for re-issuing this. My only regret is that it isn't being re-released in big-screen theatres, where it can be properly appreciated.
See this. I think most of you will be cheering this monumental achievement.
Read more
22 people found this helpful
Helpful
Comment Report abuse
See all reviews from the United States

v a robbins
5.0 out of 5 stars best dvd
Reviewed in the United Kingdom on March 24, 2014
Verified Purchase
This was a present for my husband and he thought it was one of the best dvds he has ever watched.
Read more
Helpful
Sending feedback...
Thank you for your feedback.
Sorry, we failed to record your vote. Please try again
Report abuse

Film lover
5.0 out of 5 stars Pure BLISS !!!
Reviewed in Canada on December 30, 2018
Verified Purchase
How do you recommend a masterpiece like TOKYO OLYMPIAD in a few sentences? It ain't easy!

I would venture to call it "the best sports documentary film of all time!"

I would also call it "the sports documentary as art!"

The colour and widescreen cinematography is absolutely stunning, especially the quality of the close-ups.
There are a few nice black and white scenes, too.

In addition to the images, the sound recording is sensational.

For me, the games themselves represent a transition between the altruistic old-world Olympics, signified by East and West Germany competing together, and the modern Olympics, represented by electronic timekeeping boards.
These games represent the best of both worlds.

The film captures some wonderfully quaint moments which are no more.

How about 100 metre runners hammering their own starting blocks into the track, a mixture of clay and cinders.
Or the scissor-kick high jump, four years before Dick Fosbury invented the flop jump.
Or several women swimmers competing without bathing caps, and winning!
Or athletes shaking hands with one other instead of hugging.

For those who don't want to buy such an expensive DVD, there is a condensed, English language version of the film on YouTube which omits some footage from this film but, surprisingly, includes some footage not seen here!
Read more
Helpful
Sending feedback...
Thank you for your feedback.
Sorry, we failed to record your vote. Please try again
Report abuse