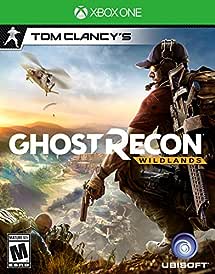 Now includes the 4v4 Ghost War PvP mode! In Tom Clancy's Ghost Recon Wildlands, the Santa Blanca drug cartel has transformed the beautiful country of Bolivia into a perilous narco-state, leading to lawlessness, fear, and rampant violence. With their corrosive influence growing, the cartel is set to bring this entire country to ruin. But all hope is not lost. You and your elite team of Ghosts must infiltrate and destroy the deadly cartel to save Bolivia, and its people, from total collapse. Set in a massive open world, you have total freedom of choice; every decision made affects the world around you. You decide how to play.

4.6 out of 5 stars
4.6 out of 5
1,172 global ratings
How are ratings calculated?
To calculate the overall star rating and percentage breakdown by star, we don’t use a simple average. Instead, our system considers things like how recent a review is and if the reviewer bought the item on Amazon. It also analyzes reviews to verify trustworthiness.

Bob 🎮💻
5.0 out of 5 stars Best Game of 2017... So Far
Reviewed in the United States on May 5, 2017
Platform: Xbox OneEdition: StandardVerified Purchase
Just amazing. A lot of critics complain that it is not fun as a solo game. I would completely disagree. With over 100 hours into the game and DLC, I am still not bored. There is an incredible amount of content.

If you have to choose between the 3 military games out right now, Wildlands, Sniper Elite 4, and Ghost Warrior 3, here's the breakdown. I do own all three.

Ghost Warrior 3 is trash. It's a no buy at any price. Maybe once it hits $10 if you're desperate. I really liked GW 2, but they really messed this one up. Graphics are terrible, movement is sloppy and clunky, shooting an assault rifle is like spraying a fire hose that you can't control. Enemies can take several sniper rounds and not go down. Just trash.

Sniper Elite 4 is pretty much SE 3. It's good. A lot of thought and time went into it. I wish it was $40. But worth the buy anyway.

Ghost Recon Wildlands is the best. It has the best movement, shooting, and sniping. By far has the most content and by far the most enjoyable. I'd buy this one first for sure.

mr. big
4.0 out of 5 stars Under-rated by critics, too much blind-hate for Ubisoft
Reviewed in the United States on July 31, 2017
Platform: Xbox OneEdition: StandardVerified Purchase
This is a very fun game, and has an amazing and diverse environment, from desert areas to tropical, steep cliffs to snowy mountains, lakes, etc. If you like classic Ghost Recon and want it to be a more realistic difficulty, then set it to the highest difficulty. If you want casual arcade fun then set it to the lowest difficulty. It's fun to play alone, a blast to play with a friend, especially if you and your friend just want to be stupid and wreckless with helicopters, planes, and other various vehicles. There's practically no penalty for dying in this game, other than having to walk a couple hundred meters. Vehicles cost nothing and are totally throwaway. Usually when we took choppers somewhere we parachuted out and let them crash instead of landing them, then ordered a new chopper when we wanted to move on.

The driving physics are very arcadey and fake, but it's necessary because the environments have so much steep and mountainous terrain, and cars take a lot of damage. If cars drove realistically this game would be so frustrating. I found myself racing friends off of huge steep cliffs, it's a blast. It's like GTA Online, but has more missions, you don't have to play around other hostile online players if you don't want to, and you can easily get helicopters, planes, tanks, motorcycles, without grinding or paying real world money to unlock them. There is no PvP, but I hear that is coming. The assortment of weapons and customization is staggering, though many of the weapon stats are not accurate relative to others, which is a huge minus.

The story is practically non-existent, and a non-player character basically is the main character of the story who steals the spotlight in the cutscenes, your character is just a grunt, which is too bad. I didn't like the endings either. The game eventually gets repetitive, but that's because there's so much of it. I gave it 4 stars because of a lot of annoyances the game has, but overall it's a blast, probably my favorite one I've ever played online with others.
Read more
6 people found this helpful
Helpful
Comment Report abuse

C.J.
5.0 out of 5 stars GTA meets Ghost Recon. The best of both worlds.
Reviewed in the United States on April 2, 2017
Platform: Xbox OneEdition: StandardVerified Purchase
This is what you get when you mix GTA and Ghost Recon.

In a lot of other games you run around, kill the bad guys and move on. Here... you WANT to kill the bad guys. The game shows you what this cartel is doing to the people. It shows you the horror of their power and their lack of respect for everyone not them. It makes you WANT to execute the enemies. They aren't just soldiers as can be said for a lot of other genre games. Here you can see even the foot soldiers intimidating the Bolivians. When you get into position for kill shots or stealth extractions, you will find yourself wanting to wipe the whole board of enemies. So.. that was cool.

There is a lot of "world" here to go through, but you will find after a Buchon or two that the game does become a bit rinse and repeat with the side missions. Each area has the same set of side missions to complete so you will find yourself calling for helicopters to quickly get to the next place and calling for armored vehicles to take out the next convoy quite often. While this aspect is pretty formulaic, it exists solely for the purpose of beefing up your skill sets and is not a requirement. The over-arching story line is worth following through each and every Buchon. You will be given the option to end the game early based on intel or to continue to destabilize the cartel. I went with 100% destabilization.

The overall mechanics of the game are pretty good but it is definitely tiresome that the cutscene mechanics for getting in / out of vehicles takes over. If you're in a firefight and need to exit your vehicle, you have to wait for your guy to close the vehicle door... why? These guys also take an eternity to cycle their weapons. I get that the mechanic exists to sow the player down a bit, but this is not a reality of any elite soldier. Additionally, at the higher difficulties, the enemies NEVER miss, even when they are shooting several hundred meters with sub machine guns that are super high rate of fire with crazy recoil. These "street thugs" are all somehow expert marksmen when using garbage weapons at great distance.

You will also likely find that you will only use the rebels for support drops and recon. Their presence on the field is often more a hinderance than anything.

All of that negative stuff out of the way... The game is beautiful. While I feel the cutscenes may have looked a bit cheap, the story progression was very good. You get used to the game's mechanics really fast as well. Likely, you will begin making different determinations on how you want to approach a certain mission. Creating goals for yourself outside those provided in the game, just to see if you can do it. And I cannot say enough how much more fun the game is when you've got other people to play with as your squad. While this may take away from the guaranteed kills with sync shot and rely on your friends to land their shots, it is more "exciting."

The weapon progression, I feel, stops pretty early. You will likely land a weapon set-up and combination pretty early on that you will stick with for the rest of the game. Most weapons didn't differentiate themselves enough to warrant changing them out. Take the MK17 (SCAR variant). Depending on where you go, you could get this weapon early on, get a pretty good set of attachments then never take this weapon off. At no point did I feel the want / need to use a submachine gun, shotgun, or LMG. But this is personal choice and fit my style of play. Your mileage may vary.

Definitely a fun game to play and one that does encourage you to finish it out 100%. You can get out at 75% completion... but why? There are still very bad people wandering the wild lands that need killing.
Read more
32 people found this helpful
Helpful
Comment Report abuse

Aman
5.0 out of 5 stars Best Special Ops Game!!
Reviewed in the United States on July 29, 2017
Platform: Xbox OneEdition: StandardVerified Purchase
HolyCow!! One of the best games I have ever played. Excellent graphics, beautiful South American music, 100% open world, and perfect cinematography.
This game is an ephiphany of CIA special ops operating in a foreighn land. Choose how You want to deal with a mission - stealth, HAHO, HALO, co-op or full-on assault. Choose from a wide variety of weapons, tactical gear and vehicles. I spent almost 4 months playing for hours and could still go on. Its like playing Narcos of Netflix, lol! Check out the image which shows I killed El Sueño and all his buchons.
Read more

Barbara
5.0 out of 5 stars Boy Likes it
Reviewed in Canada on December 26, 2018
Platform: Xbox OneEdition: StandardVerified Purchase
Purchased for my 14 year old and he likes the game
Read more
Report abuse