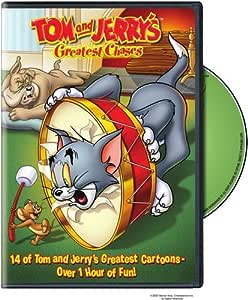 Rated:
NR
Format: DVD
4.8 out of 5 stars 60 ratings
See More
Available at a lower price from other sellers that may not offer free Prime shipping.

Everyones favorite cat and mouse are back with 14 shorts from the popular cartoon series. Volume 2 finds Tom and Jerry engaging in some of their greatest chases ever!

Cats chase mice--it's a simple law of nature--but few have cultivated the art of the chase as skillfully as Hanna Barbera did in their animated Tom and Jerry cartoons in the mid-1940s and early-1950s. Every episode is essentially an extended comedic chase bursting with subterfuge, destruction, and an abundance of action. Tom, the cat, is 100-percent fixated on catching Jerry, the mouse, so when Tom can't seem to prevail in a simple chase, he resorts to a mail-order book for some new techniques that are sure to yield results in the Academy Award®-winning "Mouse Trouble." Unfortunately for Tom, Jerry is uncannily able to outthink even the most elaborate plan. Light is shed on the strangely protective relationship between the bulldog, Spike, and Jerry in "The Bodyguard," and it seems that no matter how hard Tom tries, he will never be able to placate, outsmart, or avoid Spike in the Oscar®-winning "Quiet Please!" or episodes "Cat Fishin'," and "Slicked-Up Pup." Tom suffers all sorts of indignities in this compilation, not the least of which are being dressed up as a baby by a bossy young girl in "Baby Puss" (not "Sufferin' Cats" as listed on the DVD cover) and being challenged by his fellow cats in "Sufferin' Cats," but his cousin Muscles Mouse eventually teaches him to stick up for himself in the Oscar®-nominated "Jerry's Cousin." Even a million dollars can't keep Tom from chasing Jerry in "Million Dollar Cat," but the crafty mouse repeatedly proves impossible to catch, especially in "Invisible Mouse." The birds and the fish gang up with Jerry in "Flirty Birdy" and "Jerry and the Goldfish," a game of billiards proves anything but simple when Jerry's around in "Cue Ball Cat," and "Heavenly Puss" gives Tom a frightening opportunity to reflect on the morality of his actions. Silly cartoon violence abounds in just about every moment of every short, and while it might no longer be deemed suitable for young children, it will inspire smiles and hearty laughter in adults and older children. --Tami Horiuchi

4.8 out of 5 stars
4.8 out of 5
60 global ratings
How are ratings calculated?
To calculate the overall star rating and percentage breakdown by star, we don’t use a simple average. Instead, our system considers things like how recent a review is and if the reviewer bought the item on Amazon. It also analyzes reviews to verify trustworthiness.
Top reviews

KFM
3.0 out of 5 stars 'Meh'
Reviewed in the United States on July 24, 2013
Verified Purchase
I just wanted more of the old Tom and Jerry cartoons, the ones from the earlier days, directed by Hanna Barbara. This DVD has a large selection for the $5 price, my kids love them. I had bought the volume 1 before this one and my kids watch it a ton, so this one fits the bill to add to the collection.

Update: I have had this DVD for a few weeks now and have watched it a few times with my kids. I don't really like this one as much as volume 1! This one is just depressing on some episodes. For example, on the first episode, Tom and some other cat friend catch Jerry and the friend holds Jerry down on a stump while Tom aims an axe, ready to chop Jerry in half. Then a little devil appears on Tom's shoulder and tells Tom instead to chop up his friend, for some reason. It would be fine if they just get on with it, but a lot of time is spent on this scene, and we're forced to sit and watch and think about what is happening! Depressing! There's lots of bulldogs with big, white, sharp teeth, and even one episode where Tom goes fishing and the fish have big, white, sharp teeth. It gets to be too much. I know, 'well, that's what Tom and Jerry is all about! they kill each other without killing each other!' But this volume is depressing. Volume 1 is WAY better for overall good Tom and Jerry fun.
Read more
3 people found this helpful
Helpful
Comment Report abuse

Kent
4.0 out of 5 stars Love me some Tom and Jerry
Reviewed in the United States on June 22, 2012
Verified Purchase
I bought this as a gift... the kids totally love it... the only reason i took a star away is that when they received the DVD is was rattaling in the case, the part that hold the DVD in the case broke off... so the DVDs can't be held in place in the box... but the DVD were not scratched and work perfectly. Thanks
Read more
One person found this helpful
Helpful
Comment Report abuse

Cynthia H.
5.0 out of 5 stars Made my son happy
Reviewed in the United States on January 8, 2016
Verified Purchase
My son just loves Tom and Jerry, and particularly the chases. This isn't really long--an hour or so--but the quality is good and he's happy with it.
Read more
Helpful
Comment Report abuse

Hana Y
5.0 out of 5 stars BEST CARTOON EVER!!
Reviewed in the United States on April 23, 2012
Verified Purchase
Love,love Tom & Jerry! It is the best cartoon ever made! I'm trying to order as many T&J dvds as I can. I'd like to pass them on from generation to generation. I understand you can easily watch them for free on the Internet, but there's nothing like actually owning them. My kids (varying in age) love watching them and they never get old.
Read more
Helpful
Comment Report abuse

Col. Stevens
5.0 out of 5 stars Very enjoyable.
Reviewed in the United States on November 6, 2012
Verified Purchase
I have built quite a library of DVD cartoons to eventually go to my grandson. Tom & Jerry is one of his favorite set of characters. I really enjoy hearing the little guy laugh so intensely. I also enjoy them.
Read more
One person found this helpful
Helpful
Comment Report abuse

Gertie A. Redlack
5.0 out of 5 stars Tom and Jerry
Reviewed in the United States on November 6, 2013
Verified Purchase
My grandson and I watch Tom and Jerry every afternoon after school. The only time we turn it off is when we do homework. Good clean fun.
Read more
One person found this helpful
Helpful
Comment Report abuse

YoMomma_38
5.0 out of 5 stars Tom & Jerry's greatest chases vol 2
Reviewed in the United States on May 21, 2014
Verified Purchase
I'm so happy to find a classic cartoon to share with my little boy. He loves 'Thomas' & Jerry as he puts it. This DVD is a good run time & will keep you laughing.
Read more
Helpful
Comment Report abuse
See all reviews

RFPLu
5.0 out of 5 stars Fast shipping
Reviewed in Canada on November 10, 2018
Verified Purchase
The product correspond to the image
Read more
Report abuse

Page 1 of 1 Start overPage 1 of 1
This shopping feature will continue to load items when the Enter key is pressed. In order to navigate out of this carousel please use your heading shortcut key to navigate to the next or previous heading.
Back
Next
Pages with related products. See and discover other items: warner brother cartoons, warner brothers cartoons