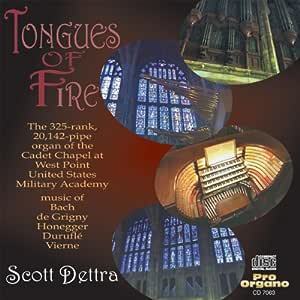 On this new release, Scott Dettra plays the 325-rank, 20,142-pipe organ of the Cadet Chapel at West Point United States Military Academy. Scott Dettra is Organist of Washington National Cathedral, where is the principal organist and assists Music Director Michael McCarthy with the direction of the Cathedral choirs. In addition to his work at the Cathedral, Mr. Dettra is also Keyboard Artist for both the Washington Bach Consort and the Cathedral Choral Society. He has previously held positions at St. Pauls Parish, K Street in Washington; St. Marks Church, Philadelphia; and Trinity Church Princeton. Additionally, he was principal accompanist of the American Boychoir for many years. A prize-winning organist, he has performed at national conventions of the American Guild of Organists and the Association of Anglican Musicians and has appeared at many notable venues throughout the world. In his work with the Cathedral Choral Society, Mr. Dettra has prepared the ensemble for performances with the National Symphony Orchestra, the Juilliard Orchestra, and the Dave Brubeck Quartet. Mr. Dettra holds two degrees from Westminster Choir College and has also studied jazz piano at the Manhattan School of Music.