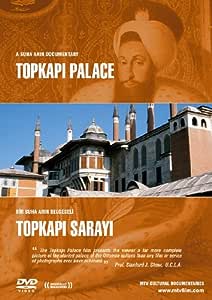 *** Attention: This DVD is in PAL (European) video format, therefore it can be played on a PAL compatible DVD player or on a computer DVD system.***

"The Topkapi Palace film presents the viewer a far more complete picture of the storied palace of the Ottoman sultans than any film or series of photographs ever have achieved" - Prof. Stanford J. Shaw, UCLA

The Ottoman Dynasty extended over three continents, surviving 600 years from the Middle Ages to the beginning of the 20th century. 24 of its 36 Sultans ruled the Empire from Topkapi Palace in Istanbul, for a period of 400 years. The royal residence, which has witnessed moments of great joy and sorrow, became a museum after the founding of the Turkish Republic in 1923 by Kemal Ataturk. Until it opened its doors to visitors from all over the world, the Topkapi Palace had always been a mysterious, shuttered world.

The "Topkapi Palace" series represents the widest-ranging project of its kind ever to be taken. It was in 1990 that all the doors of the Topkapy Palace were opened to a film crew for the first time. Their lights probed parts of the palace still closed to visitors and, indeed, into places that had never seen the daylight.

This documentary series is based on the latest available historical documents. Miniatures, engravings and illustrations produced by the domestic and European artists of the Ottoman Period were also used as further documentation and illustration of the fascinating life that existed behind these locked doors.

The series consists of seven episodes: "General Outlines", "The Inner Palace and Its Pavillions", "The Sacred Relics", "The Harem-I", "The Harem-II", "The Treasury" and "The Collections".

Dana Jaeger-Lund
5.0 out of 5 stars A must have
Reviewed in the United States on April 13, 2015
Verified Purchase
Fantastic DVD epescially since we had just been to the palace! Highly recommended
Read more
Helpful
Comment Report abuse
See all reviews

Amazon Customer
5.0 out of 5 stars The Palace of the Sultans
Reviewed in the United Kingdom on April 14, 2017
Verified Purchase
Absolutely splendid series on a magical place.