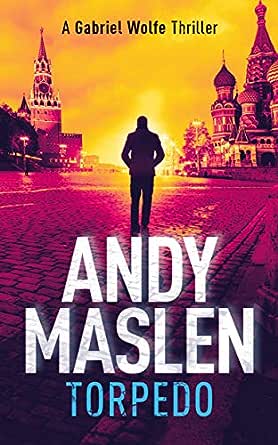 You've subscribed to The Gabriel Wolfe Thrillers! We will preorder your items within 24 hours of when they become available. When new books are released, we'll charge your default payment method for the lowest price available during the pre-order period.
Update your device or payment method, cancel individual pre-orders or your subscription at
Your Memberships & Subscriptions
There was an error. We were unable to process your subscription due to an error. Please refresh and try again. 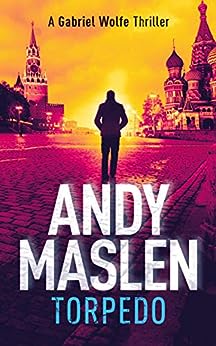 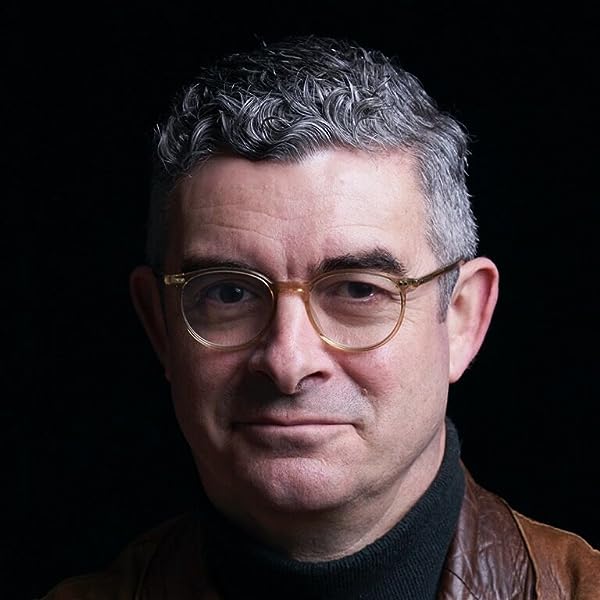 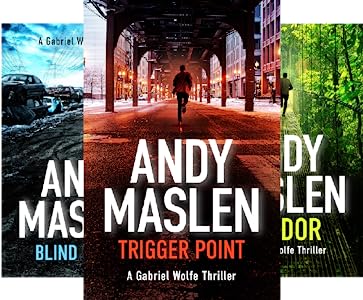 4.7 out of 5 stars
4.7 out of 5
263 global ratings
How are ratings calculated?
To calculate the overall star rating and percentage breakdown by star, we don’t use a simple average. Instead, our system considers things like how recent a review is and if the reviewer bought the item on Amazon. It also analyzes reviews to verify trustworthiness.
Top reviews

Bookworm Sandy
5.0 out of 5 stars Ch-Ch-Ch-Changes
Reviewed in the United States on July 23, 2019
Verified Purchase
This is Andy Maslen’s most emotionally-charged book in the Gabriel Wolfe series to date. It starts off with a prologue in the form of a confessional in Gabriel’s own words as he mourns the soul-shattering loss of another beloved friend. Gabriel has reached a psychological crossroads. After years of fighting for God and country and getting his PTSD under some control, this latest loss leaves him wracked by survivor’s guilt and filled with blind rage.

Searching for the assassin who killed his friend, Gabriel and his partner Eli find a lead to the Kuznitsa, one of Russia’s most powerful crime cartels led by a man named Max, who has been trying to get rid of Gabriel for several years. Upon reaching Russia, Gabriel and Eli connect with Tatyana Garin, a Russian oligarch whom Gabriel befriended in London and who provided help on several missions in the past. Learning that Tatyana also has an interest in seeing an end to Max and the Kuznitsa, a plan is set in motion. With a first strike against Kuznitsa in eastern Russia successfully sompleted, Gabriel and Eli return to Tatyana’s dacha to plot their next move. When Eli is called away on a family emergency, Gabriel goes on alone and off the rails in mindless fury. The takedown of Kuznitsa is the main plot, but it is interspersed with a subplot involving a Colombian drug cartel being targeted by a mysterious female Chinese assassin and snippets of Gabriel’s written testimonial as he continues to try to make sense of his life.

As usual, Maslen amps up the action as he deepens the emotional payoff that, in this case, builds to a firebomb of a final confrontation and a closing testament that reveals a seismic shift in our haunted hero. This is a true tour de force that will leave you gasping for more
Read more
Helpful
Report abuse

Judy O
5.0 out of 5 stars Gabriel's thriller #9 kept me up until I finished it!
Reviewed in the United States on July 1, 2019
Verified Purchase
Beginning with a gunshot on the beach that ended the life of his friend and former fiancée and injured him, Gabriel and his partner travel to Russia to seek revenge. Along the way he meets members of a drug cartel, a Chinese triad member, and the Russian mafia. He also spends time in a Russian prison and ends up in the home of the man who wants him dead, a man who keeps a silver wolf as a pet.

This book has nonstop action and left me thinking that Gabriel needs a long vacation on a secluded island, along with his partner, before he goes out to rid the world of more bad guys. Of course, knowing Gabriel’s past, he will find adventure wherever he is. I have read all the Gabriel Wolfe thrillers and always look forward to the next one.

J. Weitkamp
5.0 out of 5 stars Another GREAT Gabriel Wolfe Story !!!
Reviewed in the United States on July 1, 2019
Verified Purchase
Another great thriller from Andy Maslen!!! The saga of Gabriel Wolfe continues. His life continues to be plagued by deaths - but what can you expect when you handle the removal of problem people for her majesty's government. The Wolfe character continues to develop as do other major characters and we are introduced to new people in his life.

Action filled as with the prior novels. The pace is fast and energetic. If you like fast paced novels this is the one for you. Keep 'em coming, Mr. Maslen !!!
Read more
Helpful
Report abuse

Bevan
3.0 out of 5 stars Basic story OK, but ....
Reviewed in the United States on January 22, 2021
Verified Purchase
The basic story is OK, but: it's spoiled by extraneous descriptions, unlikely (even blatantly impossible) scenarios, lots of silly discussions with dead people and dream sequences [did not actually 'read' any of that nonsense].
Confusion reigns from the first few paragraphs when someone is shot and an ambulance magically arrives seemingly seconds later...?
Read more
Helpful
Report abuse

Andrew C
4.0 out of 5 stars Enjoyable
Reviewed in the United States on October 5, 2019
Verified Purchase
Gabriel Wolfe is a bad man and this book takes him to another level compared to previous books. He takes on Kunitsa and goes to a Russian prison to do so. The characters were intriguing throughout. The story was slightly convoluted at times but Maslen keeps you interested. The end was amazing and keeps the legend of Gabriel Wolfe going
Read more
Helpful
Report abuse

dennis barron
5.0 out of 5 stars Torpedo Andy Malsen
Reviewed in the United States on July 8, 2019
Verified Purchase
Gabriel Wolfe works a very covert unit in her majesty's secret service. The unit takes care of problems MI6 can't. Or, is unwilling too. Someone very close to him has been murdered. In front of him. Actually, he was the intended target A very powerful Russian gang Lord ordered the hit. His name in short is Max. Now everyone involved including Max will die. This is an extremely powerful and well written novel. Once I started I was unable to put it down. A masterpiece!!
Read more
Helpful
Report abuse

bill loy
5.0 out of 5 stars Buckle up and enjoy the ride!
Reviewed in the United States on July 15, 2019
Verified Purchase
I spent the week really angry and frustrated. Work kept getting in the way of my reading! Every time I put this book down my vocabulary got more and more salty. This book begs to be read non-stop. The action never stops as Gabriel goes into his dark space. If you like a lot of excitement when you read, you really need to pick this book up. Buckle your seatbelt and enjoy the ride!
Read more
Helpful
Report abuse

cmk
5.0 out of 5 stars He’s Baaaack....
Reviewed in the United States on July 2, 2019
Verified Purchase
Author Andy Maslen is back with the next installment of the Gabriel Wolfe series. I’m always eager to read Andy’s next book. The characters are interesting, and the plot always pulls you in and keeps you locked in tight. I’m already looking forward to the next story!
Read more
Helpful
Report abuse
See all reviews

Mrs K Miles
5.0 out of 5 stars Death walks in his footsteps
Reviewed in the United Kingdom on July 1, 2019
Verified Purchase
You really should hate the dark and violent character that is Gabriel Wolfe but Andy Maslen’s brilliant writing brings to life the broken and vulnerable person that he also is. In this book Wolfe sets out to seek revenge for the murder of his friend Britta. Along with his partner Eli they end up in the dark world of Russian gangs with dramatic effect.
Although this book is gorey and violent in places it’s more story led than the others and, in my opinion, is Andy Maslen’s best yet.
Read more
3 people found this helpful
Report abuse

Mr. Nigel Saunders
5.0 out of 5 stars Another High Octane Wolfe Experience
Reviewed in the United Kingdom on July 1, 2019
Verified Purchase
Having become an avid Gabriel Wolfe fan, I genuinely wondered whether Andy could successfully move the story forward from the dramatic close at the end of ‘No Further’ - I need not have worried the plot of ‘Torpedo’ is strong and the characterisation really engaging.
As always the story revolves around the strength and resilience of the main character Gabriel Wolfe, however the surrounding cast are really well drawn. That aspect combined with the excellent technical insight in to security processes and equipment gives the reader a really feeling of authenticity when viewing in to the world of organised crime and terrorism.
Each book in this series have progressively established Gabriel Wolfe as a credible and exciting action hero and right from the the first paragraph you are engaged with this story.
The plot line is absorbing and any established Andy Maslen fans will love it, equally if you are new reader you can read this story as a stand-alone and really enjoy it if you like the action genre.
Read more
One person found this helpful
Report abuse

Ian Brown
5.0 out of 5 stars Torpedo - the best yet
Reviewed in the United Kingdom on July 1, 2019
Verified Purchase
Book no9 in the Gabrielle Wolfe series and possibly the best today’s. Gabrielle still suffers with inner demons but he is determined to banish them in the only way he know - with violence. Multiple twists and turns, keeps you hooked from page 1; very difficult to put down, even for a minute. Prepare yourself for a thrilling ride
Read more
2 people found this helpful
Report abuse

AnOn.
4.0 out of 5 stars Torpedo by Andy Maslen
Reviewed in the United Kingdom on August 30, 2019
Verified Purchase
A tense sequel to No Further with Gabriel Wolfe seeking vengeance on everyone involved in the murder of his friend, Britta. Racked with grief over her death and knowing that he was actually the gunman's target, Gabriel sets out on a bloody trail of revenge partnered by his fiancee, Eli. There is, as usual, plenty of action with Gabriel almost losing the plot.

I deducted a star as I felt that the "costume" (no spoilers) worn by Gabriel was a little too OTT as were the number of occasions when he received advice from people who were not actually present.

Overall though an enjoyable read.

Kenny H.
5.0 out of 5 stars Torpedoed by Gabriel Wolfe
Reviewed in the United Kingdom on July 29, 2019
Verified Purchase
I'm sitting at home with a large grin on my face and feeling completely satisfied about completing Torpedo, Andy Maslen's latest offering about the life and adventures of the indefatigable Gabriel Wolfe, a character I've grown to admire very much.

If you're a fan of hard hitting, hero based modern combat fiction then reading this latest book will give you your 'fix' Gabriel has style, panache and bucket loads of grit and determination. He dispatches baddies quicker than Gordon Ramsay can muster up his latest swear infested insult to some poor hapless restauranteur.

This story moves like lightning across the pages and the storyline is driven by Gariel's desire to put right the wrong so harshly dealt to his friend, ex-lover and colleague.

I'm a great fan of the Gabriel Wolfe stories and I'm one of the lucky ones I guess as I've still got the back catalogue to get my teeth into!

To sum up this latest book is pretty easy really, brilliant!