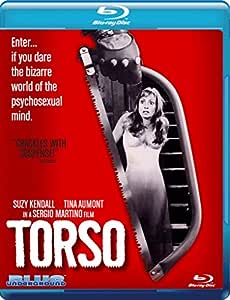 Directed by Sergio Martino (MOUNTAIN OF THE CANNIBAL GOD) and starring Suzy Kendall (THE BIRD WITH THE CRYSTAL PLUMAGE) and Tina Aumont (SALON KITTY), this Euro Horror chiller was originally released in America with much of its controversial violence removed by censors. Now freshly transferred in thrilling High Definition from the original negative, TORSO is presented in both its Uncensored English Version and Full-Length Italian Director's Cut for the first time ever!

"Martino Pulls Out All The Stops To Create An Incredibly Nail-Biting Affair!" ---DVD Times

4.6 out of 5 stars
4.6 out of 5
196 global ratings
How are ratings calculated?
To calculate the overall star rating and percentage breakdown by star, we don’t use a simple average. Instead, our system considers things like how recent a review is and if the reviewer bought the item on Amazon. It also analyzes reviews to verify trustworthiness.

Allen Garfield's #1 fan.
5.0 out of 5 stars Both Giallo and proto-slasher. Arrow bluray. (Worth upgrade from Blue Underground.)
Reviewed in the United States on July 28, 2019
Verified Purchase
The average Sergio Martino afficianado would consider this his best. (This viewer agrees.)

Definitely worth an upgrade from the Blue Underground release. The sound and picture are fantastic. Lots of extras and great (as always) packaging from Arrow.

Fantastic film! Might be Sergio Martino's best. A hyper-sexual sadist (right out of Psycopathia Sexualis) is on the loose in one of the best films of its kind. The extreme misogyny doesn't only apply to the killer; every male in the film is a borderline rape-o. Martino did the right choice, in that he doesn't pay hypocritical lip service to female "empowerment" - the thrills might take a psychic toll on some of the viewers (voyeurs?) amongst us.

As to the voyeurism: lots of it. Surreptitious peeling or blatant leering from every male in the cast - on the street, through wondows, crowded rooms and all-girl slumber parties, indoors and out. And some great POV. The camera - and by extension - the audience, is complicit. Lots of fetishistic upskirt shots. Lots of leg shots befitting an issue of "Leg Show." (Not to mention down blouses.)

In case I wasn't clear:

More than enough sex and nudity for three movies. And the grisly sex murders.

Lots of sexually charged (is there any other kind) violence towards women, natch.

Excellent as a mystery/suspense-thriller. Or as exploitation/slasher. Or Infantile(wink wink) Horror - it depends on the viewer's sensibilities.

Very high production values, as good as any mid-budget 70s H'wood flick. The camerawork if terrific; above beyond the beyond the conventional cinematography of the era. Shockingly (even today) b!unt, crude and sexually regressive dialogue aimed at our hapless heroines.

The entire female cast are wildly attractive. Suzy Kendall a dead ringer for Julie Christie. Tina Dumont and the rest equally foxy. The cast is filled with familiar genre faves.

Arrow did an amazing job here. One of their best releases/restorations. The bonus interviews are great and the entertaining/insightful audio commentary by scribe (and Martino authority) Kat Ellinger is wonderful, as always.
Read more
7 people found this helpful
Helpful
Comment Report abuse

SwinscowIslington
5.0 out of 5 stars Terrific Blu Ray of a Classic Giallo
Reviewed in the United States on June 10, 2020
Verified Purchase
This is probably my all-time favorite Giallo film. There are many other good ones out there, but this one has a combination of cast, pacing, story themes and suspense which make it a keeper. The story starts out with a setup for the domino effect of murder which is to follow. Unlike the usual slasher film, the killer is not on a blind and irrational rage, neither is he interested in killing strangers. He kills to protect a secret but each crime leads to a witness who must then also be eliminated. Following the trail of carnage leads to a remote Italian villa, where the film plays its final hand in a long and suspenseful sequence.

The blu ray is sensational - perfect color, rich deep image and fine clarity. It's very cinematic in look and feel, which is exactly what I wanted. The menu is easy to navigate and not over-designed. Sound is also good and clear. This one will be in my collection forever!
Read more
One person found this helpful
Helpful
Comment Report abuse

J. West
5.0 out of 5 stars The Best Slasher Film In The Year Of 73'
Reviewed in the United States on August 29, 2018
Verified Purchase
One of Sergio Martino's Best slasher film I ever saw. Made in the early 70's. I just watched it and I thought it threw me off who the killer was. Because they wouldn't show his face at first. It made me wander who it was. I love it alot because you get to see the gory, full nudity, and boobs. Also very suspense, I wanted someone to survive the carnage. What a horror fan would love.
Read more
3 people found this helpful
Helpful
Comment Report abuse

V. Risoli-Black
4.0 out of 5 stars The Way of All Credit
Reviewed in the United States on November 17, 2013
Verified Purchase
This is an excellent blu-ray transfer of a rather rare giallo/slasher film that is given an introduction by writer/director of questionable renown, Eli Roth ("Cabin Fever" and "Hostel") that is truly scary. Blue Underground also provides an interview with the director of the film in which they claim and even coerce the director, Sergio Martino to agree "Torso" is his "masterpiece." The director has made many films and outran Dario Argento with three superior giallos starring Edwige Fenech, George Hilton and Ivan Rassimov: "The Strange Vice of Mrs. Wardh," "Your Vice is a Locked Door and Only I Have the Key" and "All the Colors of the Dark.." "Torso" is only more accessible especially to the general public who made "Friday the 13th" and other similar popular titles so big, of which it is basically a predecessor. What also gets in the way of "Torso" being on top is the tendency to include sensationalism, which in another genre Martino made a number of pictures like "Mountain of the Cannibal God." Suzy Kendall is excellent in "Torso." Color. Written by Martino and Ernesto Gastaldi, produced by Carlo Ponti, with good music and also with John Richardson.
Read more
2 people found this helpful
Helpful
Comment Report abuse
See all reviews

Mr. Joel S. Greenhalgh
5.0 out of 5 stars A Brilliant Horror Film!! A great stalk and slash style movie!!
Reviewed in the United Kingdom on July 22, 2016
Verified Purchase
This is a brilliant and massively underrated italian slasher and is definitely up there the best horror films such as "Halloween" and and "Psycho" for pure creepiness, it is also a brilliant stalk and slash style horror movie and probably of the best of that kind, its also really clever how you get to know who the killer is in the end and how surprising it is!!
Read more
One person found this helpful
Report abuse

NELMES316
4.0 out of 5 stars Highly intense
Reviewed in the United Kingdom on September 24, 2009
Verified Purchase
This is by far one of the best Slasher/Giallos I've seen outside an Argento or Mario Bava effort. Its lethargic but never tedious, full of suspense and has some genuine edge-of-the-seat moments. There is a highly intense scene where the beautiful Suzy Kendall must hide from the killer while he dismembers three of her friends. The plot is simple but there are plenty of red herrings to keep you guessing. There is a very eye-catching female cast and the acting is pretty good. The only down side is the mediocre special FX. But this can be forgiven as the story is so good.
Read more
One person found this helpful
Report abuse

Petri Pentikäinen
4.0 out of 5 stars Great italian horror thriller!
Reviewed in the United Kingdom on September 1, 2013
Verified Purchase
Torso is great italian horror film. It is far more better than slasher movies of today. The story and atmosphere in this film is exciting and the women are vey beautiful. I would recommend this to everyone who likes horror and thriller movies.
Read more
Report abuse
See all reviews