Check fit by computer
Find the right part
Make sure this fits your model
Can't find your model number?

We're not sure this item fits your
Why not?
Check another model
Our finder cannot confirm if this item fits your model. Try checking the product description for more information.
Thanks for your Feedback
Please provide your feedback 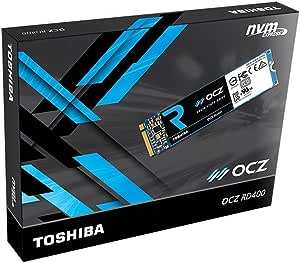 Brand: Toshiba OCZ
4.2 out of 5 stars 206 ratings
| 79 answered questions
Available from these sellers.

Introducing a new breed of enthusiast storage, the OCZ RD400 NVM Express M.2 Solid State Drive Series, designed to propel high end computing into a new realm of possibilities. The OCZ RD400 PCIe Gen3 x 4 outperforms SATA SSDs by over 4.5 times in sequential read (up to 2,600 MB/s), and over 3 times in sequential write performance (up to 1,600 MB/s) so your system won't be deprived of the storage bandwidth your data intensive workload requires. The OCZ RD400's next generation NVMe interface provides a more responsive PC experience and shorter storage latency than today's traditional hard disk drives and SATA SSDs. Game changing Storage: Toshiba's new OCZ RD400 SSD redefines high performance storage for enthusiasts and hardcore gamers that feel held back by commodity storage hardware. With over 200,000 IOPS at4KiB of random read performance at your back and call, the OCZ RD400 will be your next high end system. Get in the PCIE Express Lane: Why keep using an interface that was designed for hard disk drives? PCI Express revolutionizes flash storage for tomorrow's high speed computing age. The OCZ RD400 boosts bandwidth and puts your data in the fast lane leaving SATA SSDs in the dust. NVM Express: Utilizing NVMe technology, the OCZ RD400 reduces latency in your system's I/O path between the drive and your CPU, resulting in smooth and responsive performance. Good Things Come in Small Packages: The OCZ RD400's compact M.2 2280 form factor packs in high performance and up to 1024GB of storage capacity enabling high end desktop speeds to exist not only in your notebook, but directly on your motherboard without taking up a PCIe slot. Flexibility for the Future: If you want to harness the power of NVMe now but don't want to upgrade your motherboard yet, the OCZ RD400 is available with an M.2 PCIe adaptor add in card. This option allows your investment to go the distance when you opt for an M.2 platform in the future.

4.2 out of 5 stars
4.2 out of 5
206 global ratings
How are ratings calculated?
To calculate the overall star rating and percentage breakdown by star, we don’t use a simple average. Instead, our system considers things like how recent a review is and if the reviewer bought the item on Amazon. It also analyzes reviews to verify trustworthiness.

Wakizashi
5.0 out of 5 stars One of the best NVMe SSDs available
Reviewed in the United States on November 5, 2016
Capacity: M.2 512 GBStyle: M.2 2280Verified Purchase
One of the best NVMe SSDs available.
Benefits:
- MLC NAND flash memory. It's much more durable for the intensive use, than Samsung V-NAND or Micron 3D NAND. In real life experience, I have number of Intel and OCZ MLC drives, which have petabytes of data written to them, and still working flawlessly. While 2 first Samsung EVO (TLC) drives are almost dead already.
- Faster than previos leader - Samsung 950 Pro, with exception of very rare (yet) new Samsung 960 Pro, which promise 3200/2000 MB/s R/W speeds :)
- Thermal control. 950 Pro may heat up to 105 degrees C, while this one starts thermal throttling at approx. 70 degrees.
- Single-sided 512 GB model is best for cooling, and best with performance.
Disadvantages:
- PCIe adapter for RD400 is overpriced, as it does not provide necessary cooling (provided small piece of thermal pad is just a joke). Highly recommended to use PCIe->M2 adapter with heatsink, like Sintech one (ASIN B00QZ0WMK0) or buy any chinese PCIe-NVMe adapter (cheap as dirt - 3-5$) and use DIY heatsink.

Notes:
- Beware of on-board M2 sockets - to get maximum speed from the drive, these must be Gen.3 - 32Gbps (PCIe gen 3 x4). Some mobo vendors provides only 10Gbps M2 sockets, connected to PCH, rather than CPU's PCIe. Especially that true for systems, designed for CPUs with 16x PCIe lanes (all middle and low-end Intel Core CPUs). And even for Socket 2011 v3 CPUs, which are able to support up to 40 PCIe lanes, motherboard may not have all of them available via PCIe slots. I would always recommend to use E5-1600 series instead of Core i7 (better feature/price balance, capable for ECC RAM - critical for workstations).
- There is a better option now - Samsung 960 Pro, but... These are announced but I never seen it in shops. The only seller at Amazon have these "out of stock", so looks like there are some problems with first of these new ultra-fast V-NAND SSDs... Hope, not like with smartphones from same vendor ;)

M. Dillon
4.0 out of 5 stars Solid performer with basic random read tests, but can run hot
Reviewed in the United States on March 8, 2017
Verified Purchase
With the provisio that I've only done basic sequential and random tests, and not done any major wear or durability tests, the Toshiba behaves very close to the Samsung 960 EVO and even has better random read bandwidths at 32KB block size or greater. It isn't as good as the Samsung 951 though, and the 'OCZ' branding brings back nightmares (not sure why Toshiba bought use of the name, it has such a poor reputation!). In anycase, the Toshiba ramps up consistently with larger block size and further ramps up with deeper queues.

Write performance is what I would expect from a small M.2 NVMe device, around 200 MBytes/sec sequential, single thread, 64KB block size. The tests below are read tests.

Basically I like it, 5 stars but with the provisio above.

I decided to dock the Toshiba one star because although it was a solid performer, I ran a full-on multi-threaded read test and the reported temperature of the Toshiba SSD went up to 81C. This is a read-test, mind you. The Toshiba should have throttled it, or flagged the temperature, and did not. Temperature regulation is important because hot flash chips result in early failures. None of the other NVMe devices under test got that hot (the Samsung 951 topped out at 76C, the 960 EVO stayed at a cool 62C, and the Intel 600P flagged auto-throttled at 75C - I don't recommend the Intel, by the way).

Joe Design
5.0 out of 5 stars A great drive but reconsider if you already have an SSD
Reviewed in the United Kingdom on December 30, 2017
Capacity: M.2 512 GBStyle: M.2 2280Verified Purchase
I bought this OCZ as I’ve used other OCZ SSD’s in the past and when one failed they replaced it with no issues. So, I gave them some customer loyalty, even though it’s really Toshiba now. I ordered this as I wanted to see what all the NVME fuss was about, even though I had an older motherboard and knew I’d have to mess with the bios, and adaptor cards, to get it to work if I wanted it as a boot drive – that’s another story – but the result was I bought a slighter newer Z77 Extreme 9 board and Asrock kindly sent me an updated bios for that, which means I can now boot from the NMVE.
Was it worth it? – No! Yes, it benchmarks like lightening and is 5 times faster than either my OCZ Vertex 4 or my Samsung Pro 850, but it doesn’t ‘feel’ any faster when I’m using the drive and that’s really the point – My steam folder is too large for this 500Gb drive, so unless I wanted to keep swapping my current favourite game from drive to drive to get faster loads, there’s really no point. Everyday programs like word, excel etc. load so fast there’s no tangible difference between the drives, but if you’re like me, you have to try it yourself to see. If you have a newer setup and are getting an SSD for the first time then you should get one, otherwise if you already have an SSD, which from a rotating hard drive, is like moving from a floppy drive to a hard drive (thinking back to my Amiga days), resist the urge. I don’t want to sound negative as this drive is good, it runs cool and I’ve had no thermal throttling issues (they include a thermal pad in the box) but I’m just a little disappointed that I didn’t see a huge jump in real-world performance.
Read more
One person found this helpful
Report abuse

P Barber
5.0 out of 5 stars Fast.....really fast!
Reviewed in the United Kingdom on March 12, 2017
Verified Purchase
Fastest NVME drive I have tried get the 1000MBs+ write and 2000MBs+ read. No complaints at all.
Read more
Report abuse