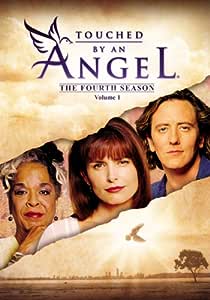 A trio of angels Monica (Roma Downey), Tess (Della Reese), and Andrew (John Dye) are dispatched from heaven with a special mission: to inspire people facing sometimes unseen crossroads in their lives. Monica, an angel who at times still needs some guidance with her earthly assignments, reports to Tess, her tough, wise and always loving supervisor. Also on hand is Andrew, who, in addition to his duties as the Angel of Death, now helps out as a caseworker on carious assignments. Gloria, an angel for the 21st century, continues to seek guidance from Monica performing her angelic duties. While the angels may not bring solutions to every problem, they always deliver a message of hope.

Viewers who complain that every story on Touched by an Angel resolves in the exact same way--the divine intervention of angels--are missing the point. This show's fans aren't interested in psychology or clever plot twists; they want to know that rosy-cheeked angels, with caring eyes and soothing voices, will be there for them when their lives seem hopeless. Touched by an Angel gives shape to that wish in the form of beatific Roma Downey, prickly but loving Della Reese, and staunch John Dye as a trio of angels sent all over America to remind troubled souls of God's love. Though the message is consistent, the writing is not. Episodes are sometimes earnest but silly (a painfully sanitized portrait of homeless teens) or outright absurd (a farmer plagued by a drought decides to sue God). But at its best (as in an episode about HIV-positive girls at a summer camp who decide to form a suicide pact), Touched by an Angel can be thoughtful and warm. As in previous years, the fourth season pulls in guest stars of all stripes, including young stars on the rise like Thora Birch (American Beauty), Mandy Moore (A Walk to Remember), Meagan Good (Waist Deep), and Patrick Fugit (Almost Famous); actors well into their careers, like Janet Leigh (Psycho), Stephanie Zimbalist (Remington Steele), Swoosie Kurtz (Citizen Ruth), Robert Guillaume (Benson); and genuine old-hand superstars like Carol Burnett and Rita Moreno. The Fourth Season, Vol. 1 has no extras. --Bret Fetzer

4.9 out of 5 stars
4.9 out of 5
139 global ratings
How are ratings calculated?
To calculate the overall star rating and percentage breakdown by star, we don’t use a simple average. Instead, our system considers things like how recent a review is and if the reviewer bought the item on Amazon. It also analyzes reviews to verify trustworthiness.

Robert G. Gass
5.0 out of 5 stars Highly Entertaining
Reviewed in the United States on March 22, 2019
Verified Purchase
Over time I have purchased all 9 seasons. I have so far watched them three times and still enjoy each episode. Adventure. life and family situations, good vs evil; God stories in real life. Ends with God intervening with his Angels. Highly interesting and often tearful.
Read more
Helpful
Comment Report abuse

Geniz Hernandez
5.0 out of 5 stars Heartwarming
Reviewed in the United States on December 17, 2009
Verified Purchase
Touched by and Angel is one of those series that no matter how you feel at the moment it will lighten up your mood. It is a soul-cleansing show that gives you hope and makes you see the brighter side of things.

As usual, I bought this for my mom, who is a huge fan of the show. I had to buy the separate volumes because the entire season did not have an audio track in Spanish. We are very satisfied with this product and recommend it to anyone who already likes the show or someone who just wants to watch a heartwarming and interesting series.

However, if you don't need the Spanish audio track, I'd recommend you get the entire season and not the volumes.

Sadly, as of this date, there are no more season available on DVD. Let's just hope that they DO release the rest!

Lisa Siegel
5.0 out of 5 stars I Love This Show
Reviewed in the United States on May 24, 2007
Verified Purchase
While I am disappointed that once again this season is split up into two volumes just like season three, I am just glad that they are continuing to make the show available on DVD.

In my opinion, it's not the number of episodes that are in the set that counts; it's the episodes themselves and the messages that they deliver. I purchased this because this show was my favorite when it was on. I made sure to tape it if I was going to be away when a new episode aired. I even watched reruns of it on PAX for a while.

So even though yes, it is split up, it is still here to purchase and when volume two of this season comes out, you can bet that I'll be buying that as well.

I highly recommend this to any fan of TBAA. It's half the season, but the wonderful messages are still there.
Read more
9 people found this helpful
Helpful
Comment Report abuse

Amazon Customer
5.0 out of 5 stars great picture / great sound
Reviewed in the United States on October 1, 2019
Verified Purchase
Worked well ..Awesome and i was happy that was exactly as described
Read more
Helpful
Comment Report abuse

C Krom
3.0 out of 5 stars Buy if you love the show but not if you want the whole season
Reviewed in the United States on September 24, 2019
Verified Purchase
Love the shows , but not the full season as expected
Read more
Helpful
Comment Report abuse

Bj Lucas
5.0 out of 5 stars why i love 'touched by an angel'
Reviewed in the United Kingdom on September 15, 2007
Verified Purchase
one might think that a series such as this would not survive in a modern world. however, touched by and angel endured nine highly succesful seasons. It did this because it did the seemingly impossible, of combining thoroughly modern issues such as aids, teen pregnancy, crime etc with the comforting message 'God cares for you' say hello to Monica, Tess, andrew and in later seasons gloria along with a brilliant array of guest stars and you'll be glad you were touched by an angel.
Read more
5 people found this helpful
Report abuse

Natalie Smith
5.0 out of 5 stars Dvd
Reviewed in the United Kingdom on October 23, 2015
Verified Purchase
Thanks for the order added to my mum's collection
Read more
One person found this helpful
Report abuse

Willy
5.0 out of 5 stars A show to love makes you believe in angels
Reviewed in Canada on January 15, 2020
Verified Purchase
I loved this show touched by an angel it warms my heart and sheds a tear everytime I watch it I would recommend this to show to everyone
Read more
Report abuse