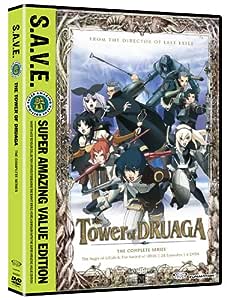 Scaling the sixty treacherous floors of the Tower of Druaga is no game. Infested with slimes, dragons, and tentacled beasts, very few survive its twisting corridors and lethal traps. Those who reach the top must face Druaga, the demon protecting the mysterious, treasured Blue Crystal Rod. It is a grueling campaign undertaken by only the bravest swordsmen and wisest sorcerers - and Jil. A young Guardian with little experience, Jil raises his shield to play the role of hero, battling his way up to the level where Druaga waits.

4.2 out of 5 stars
4.2 out of 5
67 customer ratings
How does Amazon calculate star ratings?
Amazon calculates a product’s star ratings based on a machine learned model instead of a raw data average. The model takes into account factors including the age of a rating, whether the ratings are from verified purchasers, and factors that establish reviewer trustworthiness.
Top reviews

Hawk23510
5.0 out of 5 stars A hidden gem
Reviewed in the United States on September 8, 2016
Verified Purchase
Where to start? This was one of the best adventure anime I've ever seen, ranking
right up there with Sword Art Online. It has a very interesting cast of characters; each
has strengths and weaknesses, and their interactions with one another add to the
story. The English dub is also one of the best I've encountered, the cast a who's-who
of top voice actors.
The story has it all: Courage and cowardice, sacrifice and betrayal, alliances that form
and reform until the very end. Very little is predictable, the twists and turns of the plot
feeling a lot like a white-water river-rafting expedition.
There is just enough comedy included to keep the story from getting too dark. This is
always a delicate balancing act for script-writers, but is very well done here.
The story is nicely wrapped up too--you never get the impression that there needs to
be another season (or two) to finish the saga.
You owe it to yourself to see this show.

Parker Lawrence
5.0 out of 5 stars Full Collection For Cheap
Reviewed in the United States on December 8, 2019
Verified Purchase
Honestly I was kind of impressed with how much stuff this came with for the price. It's got everything there. The entire first and second seasons, textless openings, voice actor episode commentaries, and a little bit more. If you're balling on a budget and filling out that anime collection, this is a great addition. The only real negative I can say about this is that it's got the UGLY green S.A.V.E spine cover on the box. If you're sorting your stuff by name, the sudden green can look pretty whack. But if you have a ton of S.A.V.E anime collections then you organize it that way, I guess it's not all that bad. Alternatively you could just print your own DVD cover if it bothers you that much.
Overall, definitely worth.
Read more
Helpful
Comment Report abuse

Ast
3.0 out of 5 stars Not the best
Reviewed in the United States on March 27, 2018
Verified Purchase
It is rare that I don't give at least 4 stars to an anime. Based on other reviews and the synopsis I thought I would like this one however this fell far short of expectations, I was not able to finish watching this as it just seemed repetitive and I lost all interest in it.
Overall the story had a good theme but don't feel that the anime did a good job of conveying that theme/storyline.
fortunately this was the save edition and I don't pay a lot for it as if I did I would have been highly disappointed.
Read more
Helpful
Comment Report abuse

JP
5.0 out of 5 stars The Right Blend of Fun and Fantasy
Reviewed in the United States on June 28, 2014
Verified Purchase
This series does something that is hard to achieve with most stories. It hits the exactly the mixture of seriousness and comedy. The story itself is a serious one - it's set in a tower created by an evil deity and filled with monsters. Every person climbing the tower has their own goals ranging from simply getting rich to making a name for themselves or even, in our hero's case, slaying Druaga himself just because its the right thing to do. The risks are real, characters come close to death and actually do die, leaving other characters to cope with the loss. On the other side of the coin though, is the humor. The story often makes fun of tropes common to fantasy games and stories with very entertaining results. Fantasy game fans will definitely appreciate the humor when the groups run across traps that have ridiculous effects or our hero has to conquer a tower within the tower with someone else controlling him like a game. However this humor does not detract from the seriousness of the story, but rather enhances the overall experience.
I would strongly recommend this series to anyone, even if you aren't a fan of anime. It's a well told story with good characters that I think anyone can enjoy.
Read more
3 people found this helpful
Helpful
Comment Report abuse

JK
5.0 out of 5 stars Great Customer Service
Reviewed in the United States on May 7, 2020
Verified Purchase
Package arrived on time and was well packed and protected. I'm glad I got this and is a really good show
Read more
Helpful
Comment Report abuse

William Reger
4.0 out of 5 stars A Rip Roaring Dungeon Adventure!
Reviewed in the United States on October 15, 2013
Verified Purchase
While I was not surprised by the ending I must give credit to the writers for this very well done series! The opening looked too silly until you discovered just what was going on and then you realized just how well done it was! A good mix of humor, with only a couple of silly aspects, made for a very enjoyable journey. One of the best explanations for a band of dungeon adventurers and the existence of a dungeon I have ever found. Unfortunately the ending of the full series was a bit predictable.
Read more
Helpful
Comment Report abuse

Willy
4.0 out of 5 stars It's a fairly good anime overall.
Reviewed in the United States on January 14, 2019
Verified Purchase
First season is more or less a comedy, Second season becomes significantly more serious and darker. Some might find the change of tones between seasons jarring but I think it fits fairly well considering the change the world is going through in the time jump between the seasons.
Read more
Helpful
Comment Report abuse
See all reviews from the United States

J.C. writes
4.0 out of 5 stars Fun series
Reviewed in Canada on January 18, 2014
Verified Purchase
We are new to watching Anime and don't know how this series compares with others. We like it so far. It is fun with a few colourful, mature scenes but nothing a 13 year old can't watch. Some nudity but overall ok.
Read more
One person found this helpful
Helpful
Sending feedback...
Thank you for your feedback.
Sorry, we failed to record your vote. Please try again
Report abuse

See all reviews from the United States
Pages with related products. See and discover other items: anime boxsets