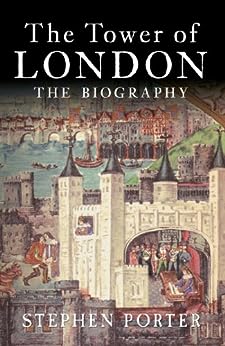 The Tower of London: The Biography Kindle Edition

Following the popular poppies display, the timing of this comprehensive history of London’s iconic tower is rather apt. (Britain Magazine, Jan-Feb 2015) --This text refers to the hardcover edition.

Stephen Porter is an acknowledged expert on London's history. His other books include The Great Plague (‘An excellent introduction’ Sunday Telegraph), London: A History in Paintings & Illustrations ('Glorious... brings London vividly to life' Simon Jenkins) & Pepys's London ('A compelling, lively account' BBC History Magazine). He is a Fellow of the Society of Antiquaries and of the Royal Historical Society. After twenty-five years living in the capital he now lives in Stratford-Upon-Avon. --This text refers to the hardcover edition.

4.2 out of 5 stars
4.2 out of 5
48 global ratings
How are ratings calculated?
To calculate the overall star rating and percentage breakdown by star, we don’t use a simple average. Instead, our system considers things like how recent a review is and if the reviewer bought the item on Amazon. It also analyzes reviews to verify trustworthiness.
Top reviews

Mike Omeara pensacola
3.0 out of 5 stars Worth the time to read
Reviewed in the United States on October 5, 2015
Verified Purchase
Informative read. Lots of interesting background information and insight into the Tower's long history.

The photographs were nice but my major problem with this book is the drawing at the beginning of the book is very small. Additional drawings of the footprint of the Tower would greatly enhance the value of this book.

Still, this is a good read for any Anglophile interested in the rich history of England.
Read more
5 people found this helpful
Helpful
Report abuse

Susan
5.0 out of 5 stars Wonderful Tower Memories
Reviewed in the United States on September 30, 2015
Verified Purchase
I will never read enough history, tales, and anecdotes of the Tower! Visited there in the early 1980s, but unfortunately I cannot travel overseas again due to health reasons.
Read more
One person found this helpful
Helpful
Report abuse

Betty
5.0 out of 5 stars Interesting
Reviewed in the United States on July 28, 2014
Verified Purchase
visited there awhile ago and enjoyed reading the history behind the tower.
Read more
One person found this helpful
Helpful
Report abuse

Annette
5.0 out of 5 stars Stunning Book of Historical Merit
Reviewed in the United States on December 14, 2012
*Review From Impressions In Ink Blog*
Summary:
The Tower of London is one of the first historical places a tourist visits in London. In a guided tour group tourists are shown the grounds and various buildings, and told of the historical events that happened there. Darker tales of people who were prisoners and many who were later executed are shared with the tourists. But, not all these fascinating stories that are told are correct, some are traditions and or legends.
Stephen Porter has written a fascinating and beautiful historical book on the Tower of London. He has bypassed traditional stories, and has worked to write a book with accurate historical information.
From the beginnings of the Norman conquest by William the Conqueror in 1066. The Tower was then built to be a fortification for William's newly captured city of London. It was built on the southeast quadrant of London and near the Thames river. The building was begun in 1078. An administrator named Gundulf was hired to build the first tower, which would later be named the White Tower. The tower was made from Caen stone, its "walls were 12-15 feet thick". It was in the 1200's that the White Tower was whitened. Most of the Tower of London's buildings were built during the middle ages, and "in its form as it is today." The author writes vivid descriptions of each of the buildings and their purposes. Most fascinating to me were the stories of men and women who were housed in the buildings as prisoners. A few of these stories I'd heard before, many of them were new to me. I was especially interested to read of the two princes that were placed in the tower during the upheaval and change of monarch to Richard III, these two boys were never seen again. A brief story of Sir Thomas More is also told, and his imprisonment in the tower. A more sinister part of the book is the description of the underground torture room.

Beautiful stunning photographs, many of them in color.
Accurate information on a landmark of London, England. This landmark is known to most of the world as both a famous and infamous site.
Stories included of both well-known historical figures, and those not as well-known. To me it was the stories of those people I'd not heard of before that made this book unique.
A book that can be read and re-read with as much fascination as the first time when it was read.
Modern history of the Tower is given. From its beginnings in 1078 up until the 21st Century.
Not only was I given the history of the Tower of London, but a brief history of England.

I found no negative points. The book in my opinion was everything I'd hoped it would be. I loved reading this book, and I plan to use it as a source of accuracy against any other books I read on the Tower of London, and England.
Thank you to Amberley Publishing and Stephen Porter for my free review copy in exchange for an honest review.
Read more
8 people found this helpful
Helpful
Report abuse
See all reviews

A. M. Attwood
4.0 out of 5 stars A Comprehensive History, but could be even more Comprehensive
Reviewed in the United Kingdom on July 6, 2015
Verified Purchase
This is a fairly specialised subject, and a fairly specialised book. It's worth saying that what you *won't* get here is a 'Horrible Histories' version of the Tower. This is a serious story about a serious place, which is both its strength and where it falls short.

If you need a history of the Tower, then I can recommend this book unreservedly. You will find everything from its genesis in Norman repression to its renaissance as a much loved tourist attraction all covered here. I can also thoroughly recommend either of the paper editions for the selection and quality of illustrations.

So why haven't I given the book 5*? Because, as a comprehensive history, it could be done better. There should be lists of office holders, a proper chronology and, above all, there should be a better description of what the Tower is like now. I don't expect a biography to be a guide book, but this is a biography of a place. There is little sense of atmosphere or lived experience in this book, and over time this shows.
Read more
4 people found this helpful
Report abuse

Larrygo
5.0 out of 5 stars Five Stars
Reviewed in the United Kingdom on March 19, 2016
Verified Purchase
A very competent account of the Tower's history from its origins onwards.
Read more
Report abuse

Amazon Customer
4.0 out of 5 stars Very informative
Reviewed in the United Kingdom on May 3, 2017
Verified Purchase
Given this 5 stars, as its really good and informative read, the detail is excellent the writer has done her research, great read.
Read more
Report abuse