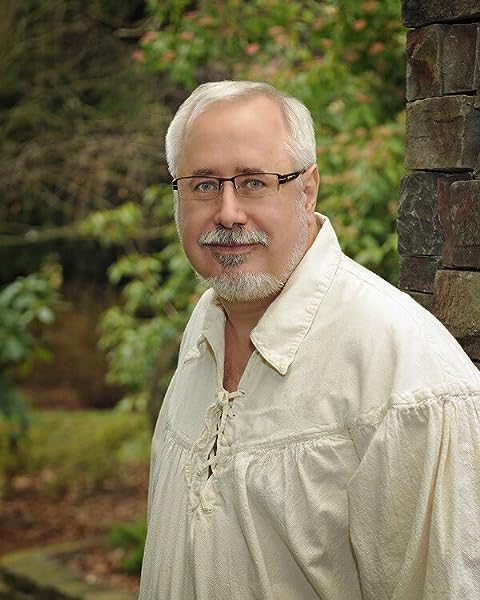 by Thomas Gondolfi (Author)
3.8 out of 5 stars 22 ratings
Book 1 of 2: Toy World
See all formats and editions
Sorry, there was a problem loading this page. Try again.

Don wakes from a normal manufacturing process as a two-meter, sentient teddy bear sporting purple fur. He learns he is the result of a desperate gamble by an autonomous factory with hashed programming. To protect his home, his way of life, and his creator, Don must lead other killer toys across a harsh alien landscape to battle the native fauna of Rigel-3 and even his own kind. His discoveries change not only his view of the wars, but his own Human gods. In spite of these trials, Don’s harshest test may be getting his own brethren to believe his adventures and the soul-churning changes needed to survive.
Read more
Previous page
Next page

Thomas Gondolfi, father of three, gamer and loving husband, claims to be a Renaissance man and certified flirt. Raised as a military brat, he spend the first twenty years of his life moving to a new place every few years giving him a unique perspective on most regions of the United states.

Educated as an electrical engineer from the South Dakota School of Mines and Technology and working in high tech for over twenty years, Tom has also worked as a cook, most phases of home construction, and even as the personal caregiver to a quadriplegic. Tom enjoys games and after nearly thirty years he can still be found most weekends playing some role playing variation, board game and/or Texas hold-em.

Tom Gondolfi has been writing fiction for over twenty-five years and doing it professionally for at least fifteen. Most of his short stories have been commissioned for use in gaming products, such as Babylon 5 Wars and Starfleet Battles. He has honed his abilities through writing well over a million words and having them independently critiqued. He has been a member of and chaired several different “destructive” critique groups.

“Toy Wars,” Tom’s first commercially viable novel, was completed fifteen years ago with a recent polish prior to publication this year. “A marriage, a move, a new job, a new home and three teens – life just got in the way of publishing my work,” he said of the delay.

“An Eighty Percent Solution” is the premiere novel of the CorpGov Chronicles. Tom is already writing book two, “Thinking Outside the Box,” and book three, “Paradigm Shift,” with a total of nine books already plotted out for the series.

KarToon12
3.0 out of 5 stars A challenging but unique story told through the eyes of a robot
Reviewed in the United States 🇺🇸 on March 20, 2018
Verified Purchase
I've slowly been making my way through a long list of books recommended to me by a librarian friend of mine, and next on the list was this little title that sounded extremely interesting. A war on an alien planet being fought by sentient toys? Now THIS seemed like a pretty creative and unique prospect.

However, by story's end, I'm left torn. While I can fully understand and recognize the creativity at work here, the execution leaves me more exhausted and bored than intrigued.

Far into the future, humanity has discovered how to travel faster than light. The only problem is that organic matter won't survive traveling at this speed, so instead, the ships transport semi-intelligent central units (named factories) , which are able to construct robots, in order to mine far away planets and collect precious inorganic materials to ship back to Earth. But thanks to a computer hacker who accidentally leaves behind a virus, the ships are all aimed for the same planet....and the robot blueprints are switched for toy blueprints from a toy factory. Now on the far off world of Rigel-3, the factories are battling each other to the death to gain control of the planet's surface....with armies of baby dolls, trains, teddy bears, and other such play things. One such toy, a purple teddy bear who eventually takes the name "Don", is granted sentience by an experiment conducted by his creator factory. But as the war rages on, and the more Don develops emotions and a conscience, the more he begins to question why the factories are fighting each other. And when a mission goes horribly wrong, Don will have to use his new-found humanity to usher in a new age of peace to this newly-emerging society of sentient robots.

Starting off with the good, Rigel-3 is a fully realized alien world, with great descriptions that made it feel like I was there with the characters, exploring liquid metal lava flows, sand storms, and golden forests along with them. But even greater is the story's unique premise, with an ugly war being fought by machines and creatures you'd find at Toys r' Us. At first, I couldn't help but chuckle at battalions and units of teddy bears, race cars, and baby dolls toting M16s and grenades, and the whole absurd situation being treated deadly serious.

And arguably, this is one of the best depictions of telling a story from a robot's perspective. Don starts off almost fully mechanical--describing things in exact units of measurement and describing his growing emotions in machine terms (ex: anger is his hydraulics overheating; fear is "increased voltage", etc...) The first third can be a bit of a slow ride to get through, but the more he develops, the more interesting he gets, and the more he starts to ponder about his existence, the meaning of life, the folly of humans and their petty wars, and if there's a way to end the conflict on Rigel-3 for good.

But in a weird way, this robotic line of thinking, for me, is also the biggest problem. It was interesting at first, but once Don abandons his factory, he then goes on a solo journey across the planet that takes up a HUGE chunk of the book, and even once he gains a travelling companion, he's pretty much left to his own thoughts. And while much of his meditation on life and the universe is profound, I still couldn't help but start to get bored. Even the "ha-ha, they're children's toys" premise wore thin, and soon, it just became another "robots gain sentience, create their own society, and parallel the evolution of mankind" plot. The action really only picks up in the last few chapters--wrapping up the story just enough, but obviously leaving a few things open for a sequel.

So while this WAS a rather unique story, the technical jargon was more than enough to nearly put me to sleep in a few spots. Still, I'm glad I gave the book a shot, and anyone who likes their sci-fi a bit more "profound" (like, say, '2001: A Space Odyssey') may enjoy this. It just wasn't for me.

Emily French
4.0 out of 5 stars Interesting character exploration
Reviewed in the United States 🇺🇸 on October 23, 2015
Verified Purchase
The only thing I didn't care for about this book was the prologue. It opens with an explanation of the events that lead to the moment where the story actually begins, as a telling of historical fact. While the omission of this section would have made some parts of the story harder to grasp, especially at the beginning, I was reminded rather too much of reading a history textbook for my tastes.

Once past that, the story is brilliant. Teddy 1499 goes through a logical, sometimes tragic sequence of self-awareness and maturation. His adventures are gripping and display a deft world-building hand with the inclusion of living creatures able to survive on a world with mercury as the dominant liquid instead of water. His loneliness is real and heartfelt, and his failures are crushing.

I can't quite tell who to best recommend this book for, as it seems like it should appeal to a wide variety of readers, so long as you're not expecting a riff on the Toy Story movies. This is not a kiddie story. Though is has no objectionable material for young readers, I suspect those under about 14 wouldn't connect with the mature themes of war, regret, and some forms of insanity.
Read more
Helpful
Report abuse

First, I caution you that there is a large info dump at the beginning. Don't put the book down--stick with it, and you'll find that the story that follows is immersive and well written.

Teddy-1499's journey to self-awareness as 'Don Quixote' is the core of this tale. He is born pre-programmed for certain tasks in the ongoing galactic war, but somewhere along the line, Teddy develops a desire to live, affection, guilt, compassion, and a need to understand the meaning of his life.

Teddy-1499 reads widely, and in Cervantes' 'Don Quixote,' he finds a kindred spirit. He begins finding many parallels in his own situation to that of the mad knight, and when he finds himself in opposition to his creator factories, he takes that as his name.

This novel is techno-based, with a lot of military jargon, which I found daunting but which will appeal to adults who read hard sci-fi with a military-centric plot.
Read more
Helpful
Report abuse

D Davis
4.0 out of 5 stars Toy Wars
Reviewed in the United States 🇺🇸 on December 27, 2012
Verified Purchase
Great SciFi story can't wait to see how the author continues at least I hope he continues it. There were a few oddities but they don't detract from the story
Read more
Helpful
Report abuse

Ted Schwartz
4.0 out of 5 stars Great premise with an interesting story.
Reviewed in the United States 🇺🇸 on July 15, 2013
Verified Purchase
The given event history and character driven arc lead into a wonderful story. I would recommend it to any sci-fi reader.
Read more
Helpful
Report abuse

_some_guy_
4.0 out of 5 stars Like it.
Reviewed in the United States 🇺🇸 on August 23, 2015
Verified Purchase
More thoughtful that the title makes it appear to be. Nice read.
Read more
Helpful
Report abuse
See all reviews

Daney Frost
1.0 out of 5 stars One Star
Reviewed in Australia 🇦🇺 on September 17, 2015
Verified Purchase
Not my type but total rubbish anyway
Read more
Report abuse
See all reviews