Train Like a Fighter: Get MMA Fit Without Taking a Hit and millions of other books are available for Amazon Kindle. Learn more 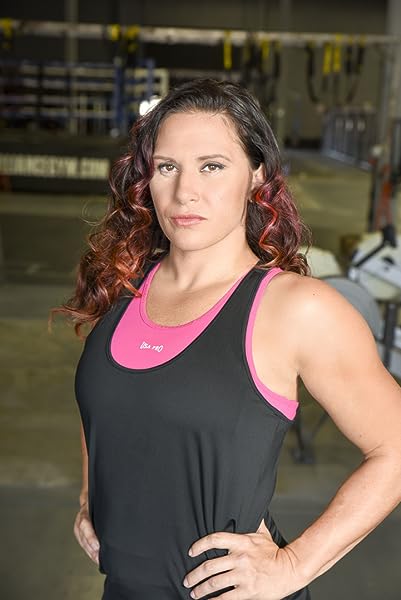 Train Like a Fighter: Get MMA Fit Without Taking a Hit Paperback – Illustrated, February 27, 2018

by Cat Zingano (Author)
4.4 out of 5 stars 107 ratings
See all formats and editions
Sorry, there was a problem loading this page. Try again.

Cat Zingano is an mixed martial arts (MMA) fighter who competed in the bantamweight division in the Ultimate Fighting Championship (UFC). She's currently a competitor in Bellator MMA. During her time in the UFC, she notched wins against two UFC bantamweight champions: Miesha Tate and Amanda Nunez. Cat also became the first mother to complete in the UFC. She lives in the San Diego area with her son.
Start reading Train Like a Fighter: Get MMA Fit Without Taking a Hit on your Kindle in under a minute.

4.4 out of 5 stars
4.4 out of 5
107 global ratings
How are ratings calculated?
To calculate the overall star rating and percentage breakdown by star, we don’t use a simple average. Instead, our system considers things like how recent a review is and if the reviewer bought the item on Amazon. It also analyzes reviews to verify trustworthiness.

Joseph J. TruncaleTop Contributor: Boxing
TOP 500 REVIEWERVINE VOICE
5.0 out of 5 stars An excellent book for anyone who desires to get into great fighting fit shape.
Reviewed in the United States on January 10, 2021
Verified Purchase
Even though I am well into my senior years I still workout hard (HIIT workouts, intense WOD workouts, boxing and martial arts workouts) six days a week. As a retired Karate and Jujitsu instructor I have tried to keep up with any new and unique fitness programs. When I saw this interesting 192 page large soft cover book (Train like a fighter: Get MMS fit without taking a hit by Cat Zingano) on Amazon for a bargain price I decided to purchase it.

This is the kind of book that is loaded with numerous exercises aimed at getting you in great physical shape. It covers a wide range of different exercises and programs to help develop your body for combat or just to keep in great physical shape. One of the many things I like about this book is then large full color pictures showing all the various exercises and movements. As someone who has been into exercising and working out for more than 7 decades I was surprised at how many various exercises in this book that I have never did in the past.

This excellent book is organized into 6 parts. Part one covers training basics such as why train like a fighter, common fighter moves and nutrition. Part two shows numerous upper body exercises. Part three deals with the essential core exercises. Part four focuses on lower body exercises. Part five emphasizes full-body exercises and the final part explains the various circuit programs and workouts to get in top fighting shape.
The only complaints about this book are the boxing punches shown. (1) It appears to me (being involved in boxing and kickboxing for many years) the captions are reversed showing Jabs and crosses. I personally also do not like the way the person shows doing the cross punch, but that is just stylistic differences. (2) This section should have shown the FOUR main punches in boxing, not just three. It does NOT show how to do upper cuts punches. In spite of those minor points I think this is a very good book for anyone who desires to get in top physical condition whether you are into fighting or not.
Rating: 5 Stars. Joseph J. Truncale (Author: Tactical Principles of the most effective Combative Systems)

Grace
5.0 out of 5 stars Great exercise book!
Reviewed in the United States on May 9, 2018
Verified Purchase
This is an excellent go to workout book for anyone, not just fighters or martial artists. The excercises focus largely on body weight, with the optional addition of light weight. All excersises focus on full core engagement and you can use what you have laying around the house for the majority of the workouts. I love that you can mix and match excersies easily to fit your goals and that they are easy to understand and follow. Overall a great book that will yield excellent results of followed.
Read more
2 people found this helpful
Helpful
Report abuse

James E Turner jr
5.0 out of 5 stars Making you fight ready
Reviewed in the United States on October 11, 2019
Verified Purchase
Being a fan of Martial Arts and having practiced Karate, I find this book helps with conditioning. For me, it helps with with loos and burning calories. It's easy to read, understand with workouts ready to go or create you own. Very good book.
Read more
Helpful
Report abuse

amazonian
5.0 out of 5 stars Perfect!
Reviewed in the United States on February 28, 2018
Verified Purchase
Perfect! It's everything you want in an exercise book--easy to follow instructions, pictures of real athletes doing each exercise, and it's well structured so you can map your own workout to achieve your personal goals. Wish I could give it more than five stars!
Read more
4 people found this helpful
Helpful
Report abuse

Veronika
5.0 out of 5 stars This is the best workout book I've ever used!
Reviewed in the United States on January 23, 2019
Verified Purchase
Contains clear instructions with great illustrations on each move including photos of beautiful Cat of course, week by week detailed workout plan and nutrition tips. So, If you are looking for a balanced workout plan this book is all you need!
Read more
Helpful
Report abuse

Estaban Baker
1.0 out of 5 stars 😒😒😒
Reviewed in the United States on January 28, 2019
Verified Purchase
Thought it would give more insight on weight cutting.
Read more
Helpful
Report abuse

K. G. A. Alavi
4.0 out of 5 stars Allegiance training
Reviewed in the United Kingdom on April 25, 2020
Verified Purchase
A good book, with easy to follow exercises, then whole programs to follow. This book is great for the lock down as a most of these exercises can be done at home with some equipment is necessary like kettlebells, medicine balls, and dumbbells. The only thing most people might find difficult to get is a heavy bag.

This is one of thing that does annoy me on books or movies. Having someones name on it to sell more copies. I hate that. The book has Cat Zingano's name on it. This is not an autobiography but a workout book, but only part the differentiate Cat from the other MMA fighter/models in this book is in the foreword and introduction. The fighter/models for this book are all from the Alliance gym roster.

The format of the book is big glossy pictures spread over 2 pages each. The steps to carrying out the excercies are in short text. This would be great, but in a couple of places the have black text on a dark grey background, with is really hard to read. Of course once you know how to do the exercise you will not have to keep reading it. Usually with a variation to make things harder as you progress.

The biggest strength of this book is it is easy to follow. When you get to the program stage, the exercise are listed, with the page numbers on them for easy reference. This is a very good easy to use book for home training to improve fitness and physique.

Theanh Tran
5.0 out of 5 stars Great book.
Reviewed in Canada on October 29, 2019
Verified Purchase
Good instructions and has some good ideas to mix up your routine.
Read more
Report abuse

Tags that will help you discover similar books. 8 tags
individual sportsweight trainingmartial artsexercise & fitnesssports & outdoorsaerobicshealth, fitness & dietingmixed martial arts
Results for:
Page 1 of 1Start overPage 1 of 1
Previous page
Next page
Where do clickable book tags come from?
Book tags are created from a variety of sources, some of which are customer-generated. Amazon is not legally responsible for the accuracy of the tags represented. If you are an author or publisher and would like to remove a tag associated with your title, please contact your vendor manager or publisher support team.
Pages with related products. See and discover other items: world kickboxing
Back to top
Get to Know Us
Make Money with Us
Amazon Payment Products
Let Us Help You
EnglishChoose a language for shopping. United StatesChoose a country/region for shopping.
© 1996-2021, Amazon.com, Inc. or its affiliates