You've subscribed to Keepers of Xereill! We will preorder your items within 24 hours of when they become available. When new books are released, we'll charge your default payment method for the lowest price available during the pre-order period.
Update your device or payment method, cancel individual pre-orders or your subscription at
Your Memberships & Subscriptions
There was an error. We were unable to process your subscription due to an error. Please refresh and try again. 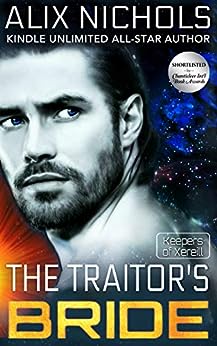 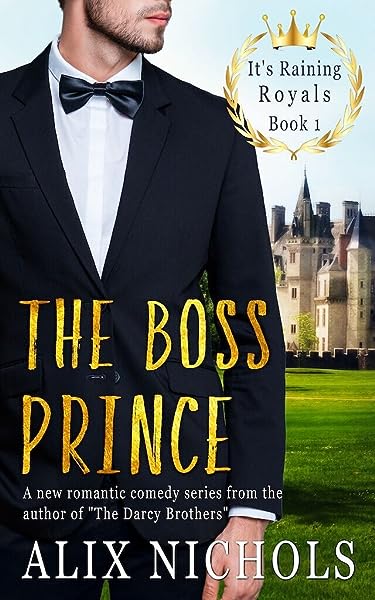 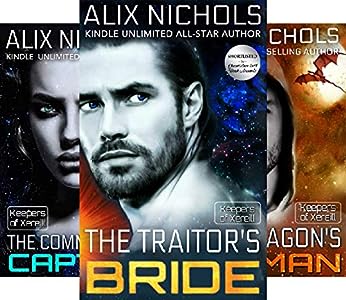 La Bohème:Standalones:
The Darcy Brothers:Playing to Win:
A romantic comedy (You're the One) and a sci fi romance (A Night of Amity) are FREE to newsletter subscribers. Visit: alixnichols.com/freebies (just copy and paste into your browser).

3.6 out of 5 stars
3.6 out of 5
180 global ratings
How are ratings calculated?
To calculate the overall star rating and percentage breakdown by star, we don’t use a simple average. Instead, our system considers things like how recent a review is and if the reviewer bought the item on Amazon. It also analyzes reviews to verify trustworthiness.
Top reviews

Linda Reads
VINE VOICE
5.0 out of 5 stars Fascinating Sci-Fi story with lots of juicy tension. Edge-of-seat intrigue.
Reviewed in the United States on April 16, 2018
Verified Purchase
This is the first Psi-Fi story I’ve read by Ms. Nichols but I thoroughly enjoyed it. Kept me on pins and needles throughout as well as causing me to cry and laugh.
Etana is a menial, lowest order of person in the hierarchy of the World of Xereill, but she’s really more…She goes to the flogging of ex-war hero and now supposed traitor, Areg Sebi, who is high-born and wealthy. Few believe he is guilty of the charges, but in this town some bad actors have the stage and run it. The lesson is that when your government becomes too strong, too illegal and people become too complicit, rights are destroyed.
So much is going on in this story: conflicts between worlds, cyborgs, secret associations to combat the main problem, government abuse of power. I can’t wait to see if there will be future books about Col. Yaggar and Lady Olinnie, Nyssa, Areg’s sister and maybe Commander Heidd. Will there be stories for Sir Geru, Prioress Aynu or Etana’s siblings: Rhori and Mayka? So much potential… This book does end with a cliffhanger, which I usually hate but am promised all will be cleared up in Commander's Captive. I can't wait...
I volunteered to review an ARC of this book, but I had already bought it so reviewed from my own book. SO GLAD I DID.
Read more
8 people found this helpful
Helpful
Report abuse

Emily Pennington
TOP 500 REVIEWER
4.0 out of 5 stars The Beginning
Reviewed in the United States on September 4, 2018
Verified Purchase
Lord Areg Sebi is a military hero and member of a noble house who is falsely accused of treason and quickly condemned to death after enduring public lashings and a forced confession. Unexpected aid from a laundry maid, Etana Tidryn, is instrumental in allowing his escape temporarily.

There are lessons to be learned here about government corruption and power being misused. In fact, there are so many characters and so many things going on that this wasn’t a particularly satisfying book to start off a new series, especially when it was intended to be a cliffhanger, without having warned the reader. It was interesting enough that I intended to read Book 2, but I thought Book 1 could have been handled a little better.
Read more
5 people found this helpful
Helpful
Report abuse

elderpisces
1.0 out of 5 stars Not worth your time
Reviewed in the United States on April 6, 2019
Verified Purchase
What a ridiculous book. Way too complicated names of characters, types of characters, planets or areas of planets, etc. I found myself rolling my eyes quite a lot while trying to get through the story. I finally gave up about 2/3 of the way through, and it was a struggle to make it to that point. Would not recommend.
Read more
6 people found this helpful
Helpful
Report abuse

Kindle Customer
5.0 out of 5 stars Exciting Serial!
Reviewed in the United States on August 26, 2018
Verified Purchase
Areg and Etana's story...But first a disclaimer. This book is part of a serial. When I started reading the prequel, I didn't realize it was the start of a serial. Too late I realized that my HEA was somewhere in the future and that I was hooked. So far, this story has kept me thoroughly engrossed. There's plenty of action, danger and romance. The characters are wonderful. The H/h are very strong and honorable. The villains are completely depraved. I can't wait to read the next book.
Read more
2 people found this helpful
Helpful
Report abuse

Angela Ogletree
5.0 out of 5 stars Wow
Reviewed in the United States on September 13, 2018
Verified Purchase
A great way to kick off a series. I enjoyed the characters thoroughly, and am looking forward to the remainder of the series. It's got me entranced so far.
Read more
One person found this helpful
Helpful
Report abuse

Kathleen Rivest
3.0 out of 5 stars i really do love to get to know the ins and outs of ...
Reviewed in the United States on April 25, 2018
Verified Purchase
This is not my first book by Alix Nichols, but it is the first science fiction novel that i have read from her so far - so i'm not quite sure if this is the first time that she's ventured into this genre or if she's a repeat, but suffice it to say that i was quite curious to find out what and how she'd deliver her book to her readers. Lately, i've become quite enamoured of this genre since the possibilities are quite endless when it comes to science fiction because quite frankly, there is no limit as to what you can image or create.

The Traitor's Bride is the first instalment in the Keeper of Xereill series and taking this into consideration, i knew that there would be some background to be discovered into the many types of 'creatures' and civilizations that exist on the many worlds. Now don't get me wrong, i really do love to get to know the ins and outs of new civilizations and new races, but i really do love a story between characters. While i applaud this author for being thorough in taking the lengths to describe the relationship that exists between the characters, the social standings and even the history of the planets (as well as their link to earth humans), i have to say that this was confusing at times.

I really did try to keep up, to make sense of who's who and especially the how these people made it to their home planet and why they are the way that they are, but i'll admit that i had troubles staying invested in the first half of the book. It felt drawn out and at the same time, some of the characters very naive or unable to act their age as is the case with Etana. Don't get me wrong, this girl is incredibly powerful and she's smart, but i think i may have rolled my eyes a few times, especially in the beginning - and maybe that's because i was still trying to keep up. So i'm taking some and i'm leaving some, knowing that i'll have to read this book once again in the future so that i can finally get a better handle on what's going on.

I'm not saying that this book isn't worth it - the complete opposite, Alix Nichols did create an incredibly details back drop of her characters that i'm sure we'll be seeing in the future. But what i am suggesting is to keep an open mind when picking this book up since there is so much information to take in a short period of time.

*ARC provided by Author in exchange for an honest review. Reviewed by Kathleen, The Small Girl from A small girl, her man and her books
Read more
7 people found this helpful
Helpful
Report abuse

Kindle Customer
3.0 out of 5 stars Three Stars
Reviewed in the United States on April 2, 2018
Verified Purchase
Okay got interested and then the story drops off
Read more
4 people found this helpful
Helpful
Report abuse
See all reviews

Jenny
2.0 out of 5 stars Didn’t Live Up To Potential or Hype
Reviewed in the United Kingdom on April 1, 2018
Verified Purchase
This is a confusing book with the plot jumping around. Read on basis of reviews only later realising that no reviews on here are verified purchase and only one on us site is verified too......
Read more
4 people found this helpful
Report abuse

Kindle Customer
4.0 out of 5 stars Left in limbo
Reviewed in the United Kingdom on March 12, 2019
Verified Purchase
Hard to get around the abbreviations and a lot of characters to take on board in a short space of time. Once into it after a slow start the enjoyment of reading settled in but was dampened by the ending. Hopefully next book clears up the loose ends.
Read more
One person found this helpful
Report abuse