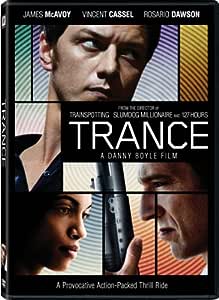 A fine art auctioneer mixed up with an underworld gang joins forces with a charismatic hypnotherapist to recover a lost painting. As boundaries between desire, reality and hypnotic suggestion begin to blur the stakes rise faster and more dangerously than any of the players could have anticipated.

4.3 out of 5 stars
4.3 out of 5
681 global ratings
How are ratings calculated?
To calculate the overall star rating and percentage breakdown by star, we don’t use a simple average. Instead, our system considers things like how recent a review is and if the reviewer bought the item on Amazon. It also analyzes reviews to verify trustworthiness.

Karen D.
5.0 out of 5 stars TRANCE IS AN ENTICING MIND-BENDING PSYCHOLOGICAL SUSPENSE THRILLER WHICH SIZZLES!!!
Reviewed in the United States on March 31, 2017
Verified Purchase
(Contains no "spoils") I was curious about James McEvoy & looked at some movies & trailers. Decided on TRANCE & very, very happy with choice!!!

I had anticipated more of an action/thriller, but TRANCE is even better...more of a psychological suspense!!! The plot "almost" revolves around an art heist, but, don't think..."oh, another 'art heist caper' film", because it's very far from that. The art heist itself could almost be another character.

The writing and performances are all masterful! James McAvoy is the magnetic lead, playing Simon, who stole the painting (I'm not giving anything away here), received a fierce blow to the head from Frank, a wicked bad-ass, very well done by Vincent Cassei, which results in Simon losing his memory of what he did with the painting. Giving a bewitching & captivating performance is Rosario Dawson, playing the hypnotherapist Simon is brought to, in order to try hypnotherapy to coax & recover his memory, and, therefore, the painting....

This is where TRANCE really begins playing with viewers' minds, teasing and tantalizing us with each step Simon takes!!! Here's what TRANCE'S plot is really all about...memories: real, "suggested" perhaps even false memories & suppressed memory. This recipe proves deliciously entertaining!!! For we're taken along on a twisting, turning, taunting, engrossing ride of what's real & what's imagined!!! While it may sound extremely confusing, the brilliant writer(s) of TRANCE and the director, Danny Boyle, "almost" answer one question at a time during each new scene as it unfolds...(or do they)?!

TRANCE builds & builds the suspense throughout the film, culminating in an invigorating thrill throughout, tying it all together neatly & very satisfyingly for the viewer. TRANCE is everything & more a psychological suspense should be and it's exceptional!!

L
5.0 out of 5 stars Complex story line with interesting characters...Trance delivers !!!
Reviewed in the United States on October 1, 2014
Verified Purchase
Well done English production with an international cast. McAvoy (English), Cassel (French) and Dawson (American) together with a intriguing and original plot is what makes this film interesting to watch. However, I have to say that I watched better performances by both McAvoy and Cassel. It is definitely not McAvoy's and Cassel's best. About the film. This is not a typical heist flick, and it certainly can not be compared to other films that deal with art stealing. I can not think of any other movie I could compare this one to. At first the plot might seem very familiar and even cliché, but as the movie progresses and reaches its climax it will surprise you. It is nearly impossible to guess the ending, it sort of borderlines with something that Hitchcock would think of. Those who are interested in hypnosis will probably find something that will interest them. As for the rest of you, if you like surprise endings, complex stories, and films with multiple protagonists than this film is definitely for you.

Basically the film is about a young and cunning security guard for one of the London's high-end auction houses played by McAvoy.
At the start of the film it seems that he is the main protagonist. Than we quickly find out that he is mixed up with the wrong kind of people led by Cassel, who lets just say do not believe in honest living and 9 to 5 work. Soon afterwards, we are introduced to the third main character Dawson, a sexy female psychiatrist who specializes in hypnotherapy. All three want one thing, and that is a painting worth few million English pounds, but only one of them knows where it is hidden, the problem is---------- he does not remember...
Read more
One person found this helpful
Helpful
Comment Report abuse

Karl Weaver
4.0 out of 5 stars Suspense Film using Hypnosis as a plot device
Reviewed in the United States on July 28, 2015
Verified Purchase
I was not familiar with these actors and actresses. In fact the biggest name seems to be the director Danny Boyle, whom I didn’t really know either. This is basically a suspense story, involving the theft of a very valuable piece of art. The auctioneer, who is knocked out during the theft, is believed to know where the painting actually went, because when the thieves open the packing, only the frame is in it. Despite some torture and the threat of death, he just doesn’t remember what happened after he was knocked out. So they end up hiring a hypnotist, to see if she can help him recall [“they” being the thieves]. James McAvoy, who appeared in X-Men First Class, has the lead role as the auctioneer and Rosario Dawson, who appeared in Sin City, is the hypnotist who purely HAPPENS to also be knockout beautiful. And yes, there’s one full-frontal nudity scene with her, which I’d have to say was gratuitous, not that I’m complaining of course. This is one of those puzzler films in which the plot keeps twisting and turning, but the main plot device here is hypnosis, so after a while you have to start asking what is real, what is hypnotically induced memory, or just plain fake, and just whose story is it, actually? It’s fair; I give it a B-.
Read more
5 people found this helpful
Helpful
Comment Report abuse

KG
5.0 out of 5 stars A fun mind game of a film - and a great guilty pleasure
Reviewed in the United States on April 6, 2014
Verified Purchase
A giant mind game of a film, combining a beautiful psychiatrist who is an expert in hypnosis, a quirky gang of thugs who’ve robbed an art auction, and one of their group who was in a car accident right after the robbery, and can’t remember where he hid the multi-million dollar painting. There are twists upon twists, and multiple levels of reality, memory and dreams going on one right after another. Sort of like ‘Inception’, but smaller, more intimate, and revolving around a heist.

I can see why some might not like it. It (intentionally) gets outright confusing for stretches, and there are admittedly few cheats in the logic, though far fewer than most films of this type. But I had a great time; the energy is high, the photography is excellent (Boyle used multiple types of cameras and color schemes to highlight the different realities), the acting is fun, and I found myself more emotionally involved with the characters and more invested in the outcome than I expected for a ‘head-trip’ type of film. One of those rare films where I really had no idea at all how things were going to turn out – the price of a lifetime of watching too many movies! I could see the flaws, and I don’t blame you if they make you want to scream in frustration at times, but they just didn’t bother me, I was having too much fun.
Read more
6 people found this helpful
Helpful
Comment Report abuse
See all reviews

RobertHedrock
4.0 out of 5 stars Worth discovering
Reviewed in the United Kingdom on January 15, 2019
Verified Purchase
A largely ignored UK-based caper/psychological thriller from 2013. Not exactly deep and meaningful but will keep you on the edge of your seat for a couple of hours. Not necessarily recommended for the squeamish. Well written, well performed and stylishly directed.
Read more
Report abuse

Mr. R. Stanton
5.0 out of 5 stars Mind Bender
Reviewed in the United Kingdom on April 1, 2016
Verified Purchase
James McAvoy is on a roll this year, this is the 3rd film I've seen him in this year that I've loved. I originally wasn't drawn to this but I'm glad I gave it a chance, it's the best mind tricking, twisty thriller I've seen since Memento. It's played out and filmed in such a way that the audience unravels the mystery locked inside the central character's head the same time as he does yet you're still unsure if what you're seeing is real or a planted memory until the very end. One of my favourites of 2014
Read more
Report abuse

N
1.0 out of 5 stars not for me
Reviewed in the United Kingdom on June 11, 2019
Verified Purchase
in the bin!
Read more
2 people found this helpful
Report abuse

Ryan Stevens
5.0 out of 5 stars Mind twisting entertainment
Reviewed in the United Kingdom on December 28, 2015
Verified Purchase
Danny Boyle delivers yet again with a story of hypnosis, action and double-crossing that shows most other movie-makers that he is one of the worlds best directors.
From the opening action to the closing scene revelation, I was gripped by this. I employee you to watch Trance and without spoiling the story, you will have a new Top 5 film
Read more
One person found this helpful
Report abuse