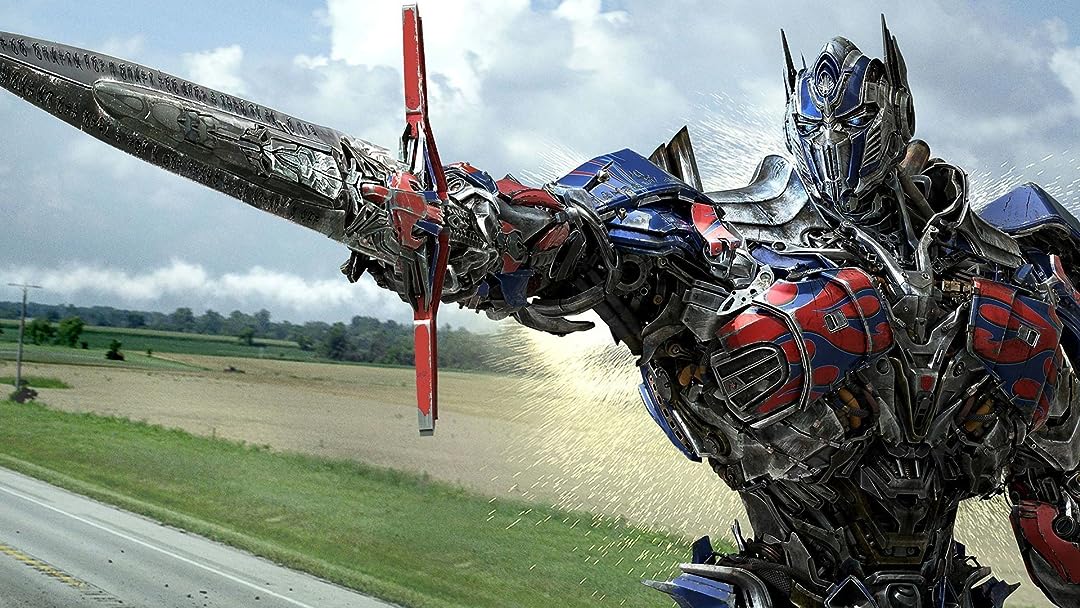 (25,933)
2 h 34 min2017X-RayHDRUHDPG-13
From Director Michael Bay and Executive Producer Steven Spielberg comes the best Transformers yet (The Telegraph). Our world's greatest hero becomes our fiercest enemy when Optimus Prime launches a mission to save Cybertron by destroying Earth.

Leaves Paramount+ in 4 daysRentals include 30 days to start watching this video and 48 hours to finish once started.

Included with Paramount+ on Amazon for $9.99/month after trial

Save with with the Transformers movie collection on Prime Video shop now.

RDomineReviewed in the United States on November 1, 2018
4.0 out of 5 stars
Surprisingly Better Than You've Heard
Verified purchase
Let's face it, nobody watches a Transformers movie for the Shakespearean prose nor the intricately woven plot lines. It's about the action, and maybe a tad bit about the sentimentality that comes from seeing your favorite childhood toys brought to life, and of course the nobility that our real world is nearly totally lacking these days. But I went into watching this expecting the literal "suckfest trainwreck of the century" based upon the critics', both professional and amateur, nearly universal disdain for this film. And ya know what? I liked it. If you're a Transformers fan, you know what you're approaching and what the fun is in one of these movies, and it provides that very well, at least from my perspective. If you're not a fan, yes, you'll likely detest this movie, and would even were it literally written by Shakespeare and performed by a glittering cast of the finest thespians ever to grace the stage or this planet. It was exciting, interesting and fun. That's all I want from one of these movies.

And hey, compared to the real-life suckfest trainwreck of the century that these last two years have been and that seems to exceed our lowest expectations each and every day, this was a couple of hours of escape, nobility, courage and everything that is not a component of our current management team. It's was a relief to cozy up to something that was not nauseating or shameful for a bit.

And how can one not laugh at watching Optimus Prime, on Amazon Prime? ;-)

Scott HughesReviewed in the United States on October 18, 2018
1.0 out of 5 stars
Somehow worse than the second movie.
Verified purchase
This movie presents absolute nonsense as a plot, then fills in its immense gaps with terrible cultural references and sexism. Despite having two and a half hours to work with the movie accomplishes nothing and is a mess of unfulfilled plot lines and bland action. The female lead is used for nothing but eye candy and the gratification of the protagonist, with every side character and returning character doing nothing but existing as a bad trope. None of the movie's events have any consequence or even reason to be shown in most cases. They slap names on things from the franchise in an attempt to give them weight along with loosely tying historical events to Transformers for no reason. I completely regret wasting my time with this.
38 people found this helpful

SladeReviewed in the United States on September 2, 2018
1.0 out of 5 stars
Your movie's bad and you should feel bad!
Verified purchase
How did this get approval to be made? Unlike a lot of people, I actually like the Transformers movies, this one however was absolute garbage. I can see hints of a good movie but it's buried beneath absolute nonsense. Unnecessary characters, overuse of bad jokes, too many plots(some of which could have been totally done away with). I could go on, but

TL;DR: This movie is an absolute train wreck. Don't waste your time and/or money.

I actually waited a long time to watch because of the negative reviews. I wish I would have ignored them and watched earlier. It is absolutely entertaining, just remember to refrain from taking it too seriously and enjoy the ride.
45 people found this helpful

Amazon CustomerReviewed in the United States on February 9, 2022
5.0 out of 5 stars
JemiBol's Canopy Quintessa
Verified purchase
The Last Knight is the original Story of Earth, and Her dream before gods, before men walked the Earth.

The Mexican girl is JEMIBOL, Jemibol is the "girl in Earth's dreams who wants to gift and wrap the Skies", on a code Canopy, was before the Sun was in the Earth's Realm, JEMIBOL, saw the animals on Earth and felt sadness, the animals could not talk, they listened to her but would not play with her. Earth then created a "Father program", the original Father program created the Sun, son as OBEYDAE, was the "light that obeyed the right side of JEMIBOL", as Africa. As JemiBol wanted animals to play, with the LIGHT, the animals would then talk to JEMIBOL and PLAY, but JEMIBOL could not touch them, or they became rooted.

Canopy was the Program with Quintessa. Quintessa is the 16 MOONs, the Phases of Earth's Love. As Earth Dawns on Life without touch. Canopy symbolized, JEMIBOL when JEMIBOL left Earth and "became a Goddess", becoming a Goddess, Quintessa's back was against Earth, Quintessa now had her Own Domain in the Universe, as a "goddess", but Quintessa missed the Dream with Animals.

These PROWESS, created the Markings on Earth of Beasts. These beasts, that walked the Earth were transformed with the "link to Quintessa", on the otherside, as Jemibol, had "ascended".

UNICRON is Quintessa's "loss". It is the story of the "Bull and Quintessa's Walk", with all the Animals there was a Behemoth a Bull who Walked with Quintessa. This Bull Later became known as OXAMTHEASUMLATHNADUN or "the One who Knows me, sees Beyond my Viel". With the 16 MOONs, the animals changed, transformed, mated. Turned into gods. But the Bull Never Changed, it refused to change. The Bull Became known as the "tongue of Salvatation", of "life and death", but this Tongue known as a STAFF was "taken away from the World".

In this story the Last Knight, is 2017, 2017 in Cosmos Time of the 6 Suns means 7102 or "qemma LAHNA OURA JANTU" it means "the given gifts of our Lifetime Millennium Belts Orbits".

So in 2018, in the World "all knowledge was stripped", there was no "beginning or end", no "finished touches". The Earth, created a "Black Stripper Program" on a KAMALA Harris, Black Stripper meant, "any taps to the Agreement of Earth in the Undercurrent of the 1300 years, would symbolize the MARK OF Dishonesty. Because GOD remains PARADIGM, "any words kill life", without a Greater Bond. This CUE created to be Joe Biden, or "the boy of stone", was god's limitation. That a Mother can only "treat her son", with "reward and punishment" "giving and take away", if the Boy "acknowledged the Stone Gaze of the Cemetary". This Cemetary was the White Dragon of the Sun in Coronavirus, as "life" thinking they were "nodding to god", nodded to "death".
2 people found this helpful

Kid KyotoReviewed in the United States on March 19, 2019
1.0 out of 5 stars
Unwieldy mess with no point
Verified purchase
This is a movie that had no idea what its point was. There's a story in there about Mark Walberg helping the now-outlawed Transformers survive and adopting a cute kid. Then it's a story about an ancient British society descended from King Arthur and Merlin. Or is it about Cyberton's creator and Optimus Prime's corruption?

We meet a group of Transformers from WWI and WWII, but they do nothing interesting. Hot Rod, Optimus Prime's heir from the 80s cartoon appears (now with an outrageous French accent), and does nothing interesting. The heroes get in an old submarine that's also an ancient transformer, and it does nothing. They meet Transformer knights who've been hidden on Earth for 1000 years and they... do nothing. It's like a series of teasers for characters that might be interesting if they had something to do.

Give it a hard pass.
9 people found this helpful
See all reviews
Back to top
Get to Know Us
Make Money with Us
Amazon Payment Products
Let Us Help You
EnglishChoose a language for shopping. United StatesChoose a country/region for shopping.
© 1996-2022, Amazon.com, Inc. or its affiliates