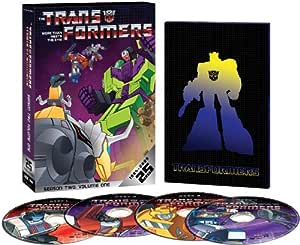 The War Against the Decepticons Rages On in The First 28 Episodes of Season Two!

The adventures of Optimus Prime and his valiant Autobots continue as they protect their new home planet, Earth, and its people against power-hungry Megatron and his Decepticons. With the help of their human friends Spike, Sparkplug, Chip and Carlee, the Autobots search for the fuel necessary to send them home and reenergize their planet of Cybertron. But if the Decepticons seize their energy source first, the entire universe may suffer the consequences under the reign of the malevolent Megatron.

This 4-DVD set contains the first 28 episodes from the second season of The Transformers, including fan-favorites such as the two-part Dinobot Island, Enter The Nightbird, The Master Builders and The God Gambit.

4.6 out of 5 stars
4.6 out of 5
73 global ratings
How are ratings calculated?
To calculate the overall star rating and percentage breakdown by star, we don’t use a simple average. Instead, our system considers things like how recent a review is and if the reviewer bought the item on Amazon. It also analyzes reviews to verify trustworthiness.

T. Boehnlein
5.0 out of 5 stars So Much Better Than Season 1
Reviewed in the United States on November 19, 2009
Verified Purchase
I said it. The writing is greatly improved and the production quality skyrocketed compared to season 1. If you love Transformers G1 and have to choose between season 1 and 2. Get this by all means. Plus it contains the episode with the most brilliant subtle joke ever on Transformers. All the Autobots easily make the jump up the cliff except one who stumbles slightly while pursing the ninja robot. It's not like they said his name a million times right before to make sure everyone got the joke. The plots are deeper with better character development and there is far less reliance on puns. There is an episode where the Decepticons get drunk. It is absolutely hilarious. So many great moments scattered through the disks. I highly recommend it.

P.S. Watching this collection reminds my why I hate Michale Bay so much.

W. Ingram
5.0 out of 5 stars More Of What I Love!
Reviewed in the United States on November 5, 2009
Verified Purchase
I would like to thank Shout Factory,a division of Rhino Records for releasing the 25th Anniversary Collection of Transformers Generation 1 on DVD.Rhino has always done a great job with pulling out and restoring records and videos that went out of production years ago.All the Frank Zappa records and rarities. Now they are doing 1980's G.I.JOE and Transformers animation.I plan to pick up all the seasons of G.I.JOE and Transformers or just wait until both mega-sets come out in November.

Yes they are available for pre-order on Amazon! The gift sets look awesome with all kind of goodies.Those releases are the complete series of Transformers and Joe.The Transformers Season One had some of the original toy commericals from '85 and '86,but Season Two Part 1 does not.But it's all good,you get the first 28 episodes of season two because in 1985 Hasbro and Sunbow ordered more episodes.

Transformers was a blazing success and a money-making machine back in "the day".For years I wanted to buy all the Transformers and GIJOE DVD's on Amazon but they were all over-priced.Now these collections are very afffordable and nowadays I will never second guess purchasing them all.It's like I missed my chance the first time due to some "personal decisions". But if you are a hardcore Transformers fan like me and still like to re-live your glory days,then you understand me clearly.

So if you want these DVD's then you better not hesitate picking them up on here on Amazon.The more limited they become,the more pricey they become.This definitely applies to all the original 1980's toys and their commemorative re-issues.Shout Factory/Rhino is doing a seamless job with restoring the color of the animation as well as missing scenes not in the originals.They cleaned it up a great deal and corrected some slight errors.

You will be pleased if you have the right audio set-up.These DVD's do not sound right on a 5.1 computer speaker system.I watch most of my DVD's on my PC.But they absolutely rock on a 5.1 Dolby Surround Sound set-up.Transformers Generation One 25th Anniversary DVD's are a celebration and perfect companion to the 25th Anniversary Collection of toys out in stores.Now we have another chance to own a piece of nostalgia from our childhood.Now if you ask me,that's just straight-up bad-a**!

Optimus73
5.0 out of 5 stars Love my childhood cartoons!
Reviewed in the United States on March 24, 2014
Verified Purchase
I finally got all the GEN 1 Transformers dvd. I grew up loving this cartoon and to think, I used to record it on my local station with a VHS VCR. Man how times have changed. I would highly recommend this if you remember this as a kid. Optimus Prime rocks and no matter how bad the Michael Bay movies are, Bay can't touch the original fan boy stuff.
Read more
Helpful
Report abuse

N. Kok
5.0 out of 5 stars Transformers season 2 part 1 is a great DVD set
Reviewed in the United States on June 16, 2010
Verified Purchase
Transformers season 2 part 1 is a great DVD set! It is the first part of season 2 of the Transformers Generation One series. the G1 episodes include Autobot Spike, The IMMobilizer, Dinobot Island Part 1, Dinobot Island Part 2,The Traitor, Enter: NightBird, Changing Gears,A Prime Problem, Atlantis Arise,Attack of the Autobots, The Microbots, The Master Builers, The Insecticon Syndrome, Day of the Machines, Megatron's Master Plan Part 1, Megatron's Master Plan part 2, AutoBersek, City of Steel, Desertion of the Dinobots Part 1, Desertion of the Dinobots Part 2, Blaster Blues, The Autobot Run, Quest for Survival, and few more episodes. If you grew-up in the 1980s and watch these Transformers : Generation One cartoons as a kid, I definitely Recommend them! I like Transformers Season 2 as much as I liked Transformers: Season 1! A++++
Read more
One person found this helpful
Helpful
Report abuse

M. Overly
5.0 out of 5 stars Just like I thought it would be, but from an adult perspective.
Reviewed in the United States on April 11, 2010
Verified Purchase
I thoroughly enjoyed watching all the episodes in this set of DVDs. Of course, there were a few episodes that were a little cheesy, but that's because I'm watching it from an adult perspective now. I do enjoy this set of episodes because Omega Supreme, Beachcomber, Seaspray, Cosmos, and Perceptor start making their appearances now. Overall, if you like Transformers (especially the first generation) then you should get this set!
Read more
Helpful
Report abuse

eaw1118
5.0 out of 5 stars Transform and roll out
Reviewed in the United States on October 18, 2018
Verified Purchase
Husband grew up loving transformers.... I aced Christmas!
Read more
Helpful
Report abuse
See all reviews

Page 1 of 1 Start overPage 1 of 1
Previous page
Next page
Pages with related products. See and discover other items: transformers cartoons