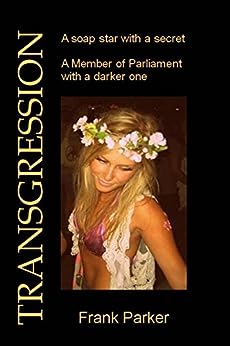 Transgression: A soap star with a secret. A Member of Parliament with a darker one Kindle Edition

According to award winning Irish author and playwright John MacKenna:"A wonderfully absorbing story with characters who came alive and a narrative that really carried me through the book in just three sittings."
Another awarding Irish author, Niamh Boyce, called it: "A well written, intriguing and topical political mystery." --This text refers to the paperback edition.

Frank Parker was born and lived in England until he retired in autumn 2006, when he relocated to Ireland, where his son had already made his home. Although drawn to writing since childhood his career as an Engineer, and the need to support his family, limited the amount of time available to practice the craft. With retirement he was able to find time to concentrate on fiction. In recent years he has produced numerous short stories and self-published 3 previous novels. His short stories have appeared in 3 limited edition anthologies. He likes to write about the lives of ordinary people and is especially drawn to periods in history when the struggle to survive was much harder than it is today. The role of politics with a small 'p' in that struggle fascinates him, especially the politics of gender. He believes that women have, in the past, suffered more than men whilst achieving much more than they have been given credit for. He tries to reflect this in his writing. He lives with his wife of 52 years in the Irish midlands. --This text refers to the paperback edition.

John
5.0 out of 5 stars The Seeds We Sow
Reviewed in the United States on December 14, 2015
Verified Purchase
Another fine novel from Frank Parker. What are the consequences of a seemingly meaningless sexual romp between a man in his late twenties and a girl in her teens when the encounter leads to the birth of an unacknowledged child? What is the fallout 40 years later, after the girl has become a well-known actress and the man has become a respected Member of Parliament?
Read more
One person found this helpful
Helpful
Report abuse

Jerry
5.0 out of 5 stars Trangressions would easily lend itself to an engaging and gripping drama on ...
Reviewed in the United States on June 13, 2018
The death of a famous actress and the emergence of an author who claims to be her lovechild born out of wedlock sets the stage for an array of characters connected through that event. Roger and Connie, gay men in a committed and loving relationship at times must live less-than-authentic lives in the midst of social prejudice. Douglas, a high-powered attorney with a pregnant wife appears to have no compunction about inviting a younger "hippie" girl into his bed. This character was very important for me in underscoring the fact that, while times may change, human behavior does not.

The author weaves together many strains of everyday life against the cultural morays of only a few decades past that forces the reader to consider that, even though we may live in a more evolved present, we can never fully escape the consequences of our past decisions. Ultimately,
we see how all these characters -- friends, businesspeople, politicians -- who took part in the underlying of cover up of a baby born decades earlier will be forced to come to terms with their own actions.

Throughout this story, I felt more as if I were reading a screenplay than a novel. Perhaps, for that reason alone, Trangressions would easily lend itself to an engaging and gripping drama on the big screen. Set in the UK, and considering that I always enjoy a good English accent, I would especially love to see the character of Roger come to life.

This book was an intelligently- and sensitively-written exploration of people and the decisions we make, their consequences, and who we will choose to be when we face those moments of truth.
Read more
Helpful
Report abuse

Thomas Burns
4.0 out of 5 stars Sins, Secrets and Consequences
Reviewed in the United States on June 15, 2018
Trangression is a story about sins and sinners. And it's a story about a secret, and just how far a sinner will go to protect it. The story is told from three POVs - a retired gay reporter from a small English city, his aunt, a designer and costumer who lives in London, and a lifelong MP who had a desire to right social wrongs but whose moral weakness kept getting in the way.
We learn the secret early on when a young woman turns up seeking her biological mother and the identity of her father. Her appearance triggers a series of events geared toward frustrating her endeavors, which in turn morphs into a cascade that threatens to expose heinous crimes. We see how a single transgression can multiply and eventually ruin the lives of the transgressors as well as hurting those who love them.
The ending is unexpected but satisfying if a bit tragic, and leaves one with the feeling that even though a man may be weak, redemption is indeed possible.
I deducted a star because I thought that the multiple POVs detracted from the story, but that means that Mr. Parker told a story good enough that I was annoyed when he veered away from it. I found the details of English life, which spanned a period from the end of WWII to the new millennium, intriguing and absorbing. All in all, I would recommend Transgession for a rainy weekend when you want to enjoy a leisurely, satisfying read over a cup of tea.
Read more
Helpful
Report abuse

Terry Tyler
3.0 out of 5 stars How the world has changed since the 1970s...
Reviewed in the United States on December 11, 2015
Reviewed by me as part of Rosie Amber's Review Team

This is an intelligently constructed, fairly complex drama that deals with the changing social attitudes of England since the 1970s, written from the points of view of three main characters. It opens with Roger, who has written a book about a recently deceased soap star. He meets a young woman who claims to be the soap star's daughter, which opens up old wounds and secrets from four decades before. Roger is forced to face up to his own guilt about his part in the cover up, which involved family friends and a local MP, and deal with the impact of the revelations on his own relationship.

The book covers many decades, with nostalgia-worthy details in each. I was a teenager in the 1970s, and this book did make me think about how far we have moved on in terms of prejudice and 'the permissive society', as it was called back in those days; sometimes for good, sometimes not so much. As the story goes on, suggestions of historic sexual harrassment are uncovered—very topical and sinister.

I found the subject matter quite interesting to read about; after all, soap operas and dramas themselves are so often based around hidden affairs and secret offspring; you can't go far wrong with a bit of family intrigue of this type! I'm afraid, though, that I found it all a bit flat. The main problem was the dialogue; each character used similar vocabulary, tone, mood and rhythms of speech; I kept forgetting who was who because they all spoke in the same way, the dialogue being mostly used to deliver facts, as was much of the narrative, as opposed to telling a compelling story with atmosphere and emotion. A trait I've noticed in many self-published mystery type books with intricate plots is that characters have lengthy conversations in which they discuss the whys and wherefores of a situation, in order to impart chunks of information to the reader, but if the characters have not leapt off the page and become real people, it's hard to care. I also felt that some of the references to social media and popular culture were a little forced.

Having said all that, the writing did improve when it moved onto the second character, Mabel, and more so again I reached the third, Douglas. The book's other good point was that the plot strands worked together well; I didn't find any inconsistencies or parts that weren't feasible, a huge plus. To sum up - it was just okay for me, but I daresay readers who care more about a carefully constructed plot than character connection would enjoy it more.
Read more
One person found this helpful
Helpful
Report abuse
See all reviews

MegaReader
4.0 out of 5 stars Good Plot
Reviewed in the United Kingdom on August 30, 2018
Verified Purchase
Douglas Bowen, a respected high flyer in the political world, discovers his past has now come to haunt him in the shape of Sally, his adult daughter from a one night stand with Marjory, a teenage temptress. Douglas is not keen on the world finding out his transgression while his wife was recovering from childbirth. As far as Douglas was aware, his best friend Roger had covered up the whole event and bundled the pregnant Marjory off to his aunt to deal with the adoption while Marjory’s parents believed she was away attending a drama school and living her dream of becoming an actress.

Fast forward 40+ years from the 1970s and Sally has read the book that Roger had written about the deceased Marjory’s life as a famous actress. She seeks Roger out, determined to find out who her father is…

Frank Parker has taken the opportunity to voice many of his own opinions in this book, and expertly weaves in news items from the 1970s to fit in with the story. There are several typos, a sometimes confusing amount of people, and rather a lot of ‘telling instead of showing’, but it’s a good tale and definitely worth four stars.
Read more
Report abuse

Amazon Customer
5.0 out of 5 stars Five Stars
Reviewed in the United Kingdom on November 6, 2015
Verified Purchase
A good plot line, neatly moving between different decades, keeping me interested as I approach the final chapter
Read more
Report abuse
See all reviews
Back to top
Get to Know Us
Make Money with Us
Amazon Payment Products
Let Us Help You
EnglishChoose a language for shopping. United StatesChoose a country/region for shopping.
© 1996-2021, Amazon.com, Inc. or its affiliates