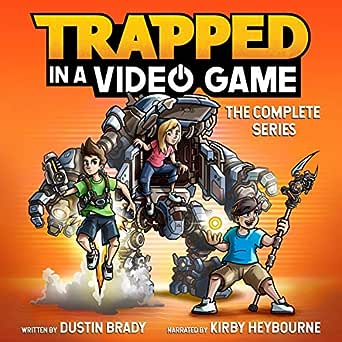 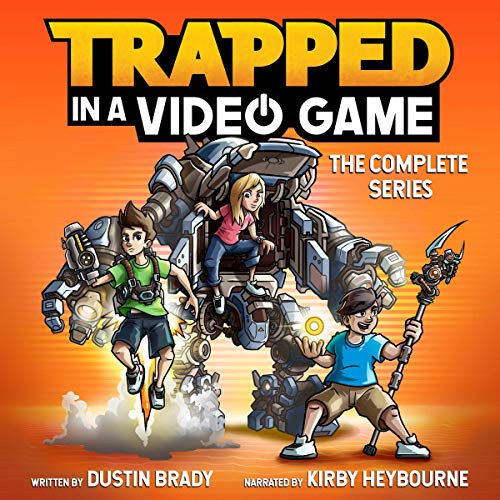 Trapped in a Video Game: The Complete Series

4.8 out of 5 stars
4.8 out of 5
384 customer ratings
How does Amazon calculate star ratings?
Amazon calculates a product’s star ratings based on a machine learned model instead of a raw data average. The model takes into account factors including the age of a rating, whether the ratings are from verified purchasers, and factors that establish reviewer trustworthiness.

RenaissanceMom
5.0 out of 5 stars 8 year old couldn’t put it down! Would recommend!
Reviewed in the United States on November 11, 2019
Verified Purchase
My 8 year old son loves these books! I have a hard time getting him to read new things. He really likes Captain Underpants, Dog Man and Diary of a Minecraft Zombie books and reads them over and over again and never wants to read anything new. I ordered these trapped in a video game books and he couldn’t put them down. I told him he had to at least give them a chance and read for 10 minutes before we went out for dinner. He did and then asked if he could bring it to dinner with him which of course we said yes to! He read all the way to dinner, while he waited for his food and then continued to read while he ate! I know, I know... we should have made him put it down to eat, but it was so great seeing him get excited about a new book! Definitely recommend!
Read more

Chemmom
5.0 out of 5 stars Great value/great gift!
Reviewed in the United States on November 6, 2019
Verified Purchase
I gave this to our grandson for his ninth birthday. He is an avid video gamer and was so excited to receive this as a gift! He is also an avid reader and can’t wait to start reading this se. He said he is lucky to have this - his friends have only one or two volumes! A great value...
Read more
8 people found this helpful
Helpful
Comment Report abuse

Amazon Customer
5.0 out of 5 stars My Grandson Loves these books
Reviewed in the United States on January 2, 2020
Verified Purchase
My grandson is in 4th grade. Not a huge fan of reading, although his teacher wanted him to read 20 minutes a day.
I got these for him for Christmas and he finished the first book within 1 1/2 days, and started the 2nd book right away.
Easy peasy when they are reading about something that is interesting to him. He loves his video games!

Tammie P.
5.0 out of 5 stars Nicely boxed . Grandson put down video game to read them ..!!
Reviewed in the United States on January 4, 2020
Verified Purchase
Set comes in a nice , sturdy container that holds them together that you can place on your bookshelf or put in a bag .. Bought for my grandson for Christmas. He says that they’re a REALLY NICE set . When a 13 yo lays down his video game to read .. it’s a PLUS PLUS ..!!!
Read more
5 people found this helpful
Helpful
Comment Report abuse

Barbara A. Breazeale
5.0 out of 5 stars Perfect for my 11 year old son
Reviewed in the United States on October 6, 2019
Verified Purchase
Once my son started on the first book he could not put them down. He loved them.
Read more
6 people found this helpful
Helpful
Comment Report abuse

Sarah and Andre Patterson
5.0 out of 5 stars Great books
Reviewed in the United States on January 13, 2020
Verified Purchase
My 10 yr old video game loving kid loves these books. It’s a struggle to get him to read anything that’s not on a screen so I bought these in hopes he’d read. And he does!
Read more
4 people found this helpful
Helpful
Comment Report abuse

DianaL
5.0 out of 5 stars Grabs the attention of a 9-year old!
Reviewed in the United States on January 15, 2020
Verified Purchase
I purchased this series for my grandson based on the reviews. They were spot on! He is 9, loves gaming and hates reading. His mom started reading book one with him to get him started. By chapter 8 he is hooked. 30 minutes after their reading session for the night and he is still asking questions. Thank you, thank you, thank you for writing something for kids that need books that will grab their attention!
Read more
2 people found this helpful
Helpful
Comment Report abuse

Tammy L
5.0 out of 5 stars Home run!
Reviewed in the United States on January 20, 2020
Verified Purchase
My 7 year old loves the books! He especially loves that one if the characters is also his own name, and he’s also a gamer, so this is a home run for him. He’s so proud to be reading chapter books, too, but they are easy chapters that won’t overload him.
Read more
One person found this helpful
Helpful
Comment Report abuse
See all reviews from the United States