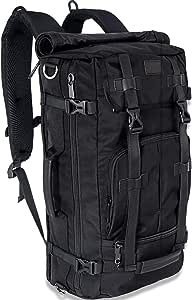 Brand: BuyAgain
4.5 out of 5 stars 186 ratings
| 23 answered questions
Available at a lower price from other sellers that may not offer free Prime shipping.

If you’re looking for the durable carry on backpack, why not consider BuyAgain 33L backpack

1. It has a variety of straps for different carrying methods

2. It comes with an expandable capacity of 33L - fits enough clothing and toiletries for a short term trip

3. It has a padded computer pocket - Keep your computer safe

4. It's has comfortable and breathable "S" mesh shoulder straps, release the stress

It’s a 3-in-1 travel backpack, duffel bag, and crossbody backpack

Carry-on Backpack has most demanding travelers in mind, and is best for:

Not The Best - But The One That Fit You Best

It comes with an expandable capacity of 33L. Standard's Carry-on-sized travel backpack is the ultimate luggage for international travel and meets airline cabin rules.

4.5 out of 5 stars
4.5 out of 5
186 global ratings
How are ratings calculated?
To calculate the overall star rating and percentage breakdown by star, we don’t use a simple average. Instead, our system considers things like how recent a review is and if the reviewer bought the item on Amazon. It also analyzes reviews to verify trustworthiness.

I would suggest purchasing packing cubes to stay organized as there aren't any sort of separation features within the bag.

LeanTravel Compression Packing Cubes for Travel W/ Double Zipper (6) Set  I purchased these and they were a perfect addition to the bag. I was able to fit 9 days of clothing plus toiletries and an additional pair of shoes inside of the bag. (keep in mind I'm a small person so my clothing is much smaller as far as bulk goes. My boyfriend who is about 150 lbs could fit about 6 days of clothing in the bag and an additional pair of shoes as well.)

We used the back pack straps, shoulder straps and handles throughout the trip. It was super convenient to have all of those options honestly, especially when we were traveling on foot, bike, train and plane.

William
5.0 out of 5 stars convenient
Reviewed in the United States on December 29, 2017
Color: BlackVerified Purchase
Great quality than I expected. The travel duffle backpack is big enough, there are many pockets, very convenient to store your belongs. What’s more, the bag is as the same as the description, it’s versatile. I like the feature that I can go with it as a duffle bag, carry it as a backpack or zip up the backpack straps, carry it as a shoulder bag.
Read more

edsong1
5.0 out of 5 stars Versatile, sleek, spacious.
Reviewed in the United States on January 10, 2018
Color: BlackVerified Purchase
Update: After carrying this backpack for over a year, I've decided to raise my rating from 4 to 5 stars. The backpack has held up admirably in my travels. The clasps still function as they did the day I bought them, with no issues at all. Regarding the durability of the side zipper, as long as one doesn't overstuff the backpack it should hold up fine in the long term. And even if it does come to the point of overfilling the backpack, the side clasps help in lessening pressure on the zipper. The backpacks also looks very cool, and I've gotten many compliments on it's style :)

I bought this backpack since I'm going on a trip abroad soon. I chose this backpack for its price, its size, and style, and it's done well on those fronts, but I have a complaint with the construction. It was a risky purchase since there's only one other review, and I couldn't find any other reviews on google.

At 40 dollars it was slightly higher price wise than other alternatives, but still pretty cheap for a backpack overall.

Size wise, it's as expected, with one large compartment for clothes electronics and laptop, a narrow but long compartment in the front where I can store toiletry bags socks or underwear, and two smaller ones at the very front where I can store things like my phone and smaller cables and pens. The backpack is as versatile as described, which I like. I haven't yet put it under a heavy load, so I can't say if it's comfortable, but I might update in the future. I'm also curious to test out how comfortable the bag functions as a duffel bag. I've read reviews of backpacks that let the user use a strap and carry them by shoulder, and usually the results are mixed. Still, the bag as a backpack fits me nicely as a person around 5'8".

Looks wise, it's exactly like the picture which I'm glad because I like the simple boxy yet sleek look.

One complaint i have is that the plastic clips that hold the backpack together feel cheap. I have a Columbia backpack that has similar clips but they feel stronger, and not as plasticky. Almost felt like it belonged on a cheap toy. Ok maybe not, but for a second I felt like that. Only the future will tell whether the plastic clips will hold together for me. The other portions of the bag felt fine, like the nylon covering or the zippers. Should the backpack stand the test of time, I'll gladly give it a 5.

Amazon Customer
5.0 out of 5 stars Makes a pretty good "Backpacking" bag
Reviewed in the United States on August 8, 2018
Color: BlackVerified Purchase
Took this bad boy on a trip through Europe, and was surprised by how convenient it was to go backpacking with.
- The main compartment may seem small, but I was able to squeeze 1 week worth of shirts, shorts, underwear, socks, and 1 pair of shoes.
- The second largest compartment is also very useful, as I was easily able to store my bathroom products, chargers, and miscellaneous items.
- The third largest compartment was used for my passport and tickets. since it's the outermost compartment, its capacity is really dependant on the capacity of the main compartment.
- Finally, the smallest compartment was used to store my powerpack, coins, and magnets I collected from my travels.

Being able to zip away the backpack straps is a real advantage when traveling by plane, whether your storing it on the overhead bin or under your seat, it's always nice to have less clutter.
Read more
13 people found this helpful
Helpful
Comment Report abuse

Pierre
5.0 out of 5 stars Perfect airline travel bag
Reviewed in the United States on February 25, 2018
Color: BlackVerified Purchase
This is a fantastic bag! It worked out perfectly for my journey. I placed all of my clothing items into smaller bags in side, but the zipper pockets outside made it perfect to keep keys, passport, and front pocket was the perfect size for the clear toiletry bag that TSA has to x-ray. Deploying the backpack straps was quick and easy. Fitting into the smallest overhead bin was a snap! The front top handle made it easy to go down the isle of the aircraft. Someone on an earlier post was concerned about the buckles, but those who camp and backpack often know these are the industry standard buckles that, under normal to moderate use, do not fail. Even when they do, a replacement can be found at any wilderness store. Superior construction everywhere. Extremely pleased!
Read more
12 people found this helpful
Helpful
Comment Report abuse