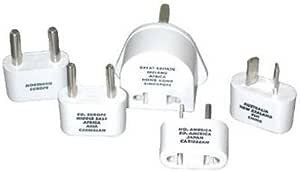 Use your favorite electronics anywhere in the world with the Travel Smart M500E Adapter Plug Set. It has 5 polarized plugs that adapt to most outlets around the world. It can be used with virtually any electronic device, espcially with dual voltage appliances and electricty converters and transformers. Plug types include: NW-1C, NW-2C, NW-3C, NW-10C, and NW-135C.

4.4 out of 5 stars
4.4 out of 5
136 global ratings
How are ratings calculated?
To calculate the overall star rating and percentage breakdown by star, we don’t use a simple average. Instead, our system considers things like how recent a review is and if the reviewer bought the item on Amazon. It also analyzes reviews to verify trustworthiness.
Top reviews

AllieTop Contributor: Nail Art
5.0 out of 5 stars Good buy
Reviewed in the United States on March 25, 2016
Verified Purchase
Work well. Used in other countries for chargers, hair appliances and worked well. They come with a bag too which avoids losing them. They were cheap so I was a little weary that they were not good quality but they are. We have used them in a few continents over a few years and they still work.
Read more
2 people found this helpful
Helpful
Report abuse

castle
5.0 out of 5 stars Sturdy, Durable and Reliable
Reviewed in the United States on May 24, 2013
Verified Purchase
My family and I like to travel a lot. In preparation for our Europe trip to 10 Euro countries in May 2013, I have another brand of adapter plug set but thought 1 set of adapter plug set is not enough for the electronic gadgets we are bringing so I have decided to buy another set. After extensive research, I have decided to purchase the Travel Smart by Conair M-500E Polarized Adapter Plug Set. After I received the product, I like what I saw and decided to purchase an additional adapter set so I have 3 sets total for our trip. The adapter plug is well built, elegant and does not look cheap.

The adapters have labels on them so you would know which adapter you need to use on a specific country. Here are the following adapters contained in the set:
Adapter 1 works on Great Britain, Ireland, Africa, Hong Kong, Singapore. (It has a metal third pin as ground)
Adapter 2 works on North America, South America, Japan, Caribbean
Adapter 3 works on Northern Europe
Adapter 4 works on Southern Europe, Middle East, Africa, Asia, Carribean
Adapter 5 works on Australia, New Zealand, Fiji, China

These adapters will work on 110V or 220V outlets but do they DO NOT convert voltage from 110V to 220V nor from 220V to 110V so if you are electronic gadgets work on 110V only then you may need to purchase voltage converter to 220V and vice-versa. I have tested these plug adapters in my laptop power adapter, DSLR battery chargers, rechargeable battery chargers, iphone/ipad chargers, kindle charger, other cellphone chargers with all of them have DUAL voltage (meaning these gadgets will work on both 110V and 220V outlets) and they all worked like a charm. The adapters fit perfectly on the outlets of the countries I have visited.

Barry Downing
5.0 out of 5 stars Worked fine
Reviewed in the United States on April 30, 2014
Verified Purchase
There are a variety of plugs with in the bag but I only needed 2 of the plugs. Had no problems using the plugs and its worth having for my travels. I would recommend purchasing a two-prong plug to keep in bag for the devices that have 3 prongs and need to be converted prior to using any of the international plugs.
Read more
Helpful
Report abuse

James R.
5.0 out of 5 stars Just what I needed for traveling to Europe
Reviewed in the United States on August 25, 2013
Verified Purchase
This set comes with all of the adaptors I needed to use with my electronics while traveling to Europe. The adaptors are good quality, they don't feel cheap and flimsy like other low-cost adaptors I've tried in the past. Each adaptor is also conveniently labelled with the areas of the world that they are compatible with for easy reference.
Read more
Helpful
Report abuse

Mero Group Hanalei Bay
5.0 out of 5 stars Travelers delight
Reviewed in the United States on June 18, 2014
Verified Purchase
These are a must have if you travel even once a blue moon to other countries.
We only travel once every 5 years but they are lifesavers, when you need to plug in.
Just be sure your device is capable of handling the voltage!
Read more
Helpful
Report abuse

Faisal Al-ali
5.0 out of 5 stars Good Buy
Reviewed in the United States on December 9, 2012
Verified Purchase
It is a good buy but I recommend the Samsonite Luggage Universal Power Adapter because it is one compact device that has several adaptors built into it. I used it in the middle east (Saudi Arabia) and it works perfect. Don't forgot to buy a voltage transformer.
Read more
One person found this helpful
Helpful
Report abuse

dadu
5.0 out of 5 stars Sturdy
Reviewed in the United States on March 2, 2014
Verified Purchase
I do a lot of traveling and purchased these for a recent trip to Thialand and Singapore. It's nice having these adapters to carry with me and know I can travel anywhere at anytime without being concerned about not having an adapter. In addition, these are very sturdy.
Read more
Helpful
Report abuse
See all reviews
Pages with related products. See and discover other items: electricity transformer, power converters for international travel
Back to top
Get to Know Us
Make Money with Us
Amazon Payment Products
Let Us Help You
EnglishChoose a language for shopping. United StatesChoose a country/region for shopping.
© 1996-2021, Amazon.com, Inc. or its affiliates