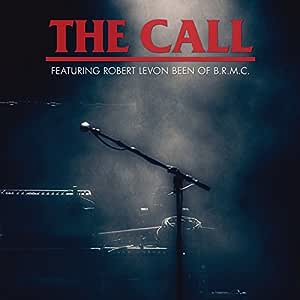 A Tribute To Michael Been (Feat. Robert Levon Been Of B.R.M.C.) [CD/DVD Combo][Deluxe Edition]

4.9 out of 5 stars
4.9 out of 5
52 customer ratings
How does Amazon calculate star ratings?
Amazon calculates a product’s star ratings based on a machine learned model instead of a raw data average. The model takes into account factors including the age of a rating, whether the ratings are from verified purchasers, and factors that establish reviewer trustworthiness.

THowerton
TOP 1000 REVIEWER
5.0 out of 5 stars Son Robert Been channels his father’s voice and spirit on this wonderful tribute to The Call.
Reviewed in the United States on October 2, 2015
Verified Purchase
One of the first things that many fans will notice is that Michael Been’s son, Robert Levon Been of Black Rebel Motorcycle Club fame, channels his father amazingly as he intones through these songs. And why shouldn’t he? After all he grew up weaned on The Call’s music and there are a few moments where he speaks from the stage about his memories of his dear dad (R.I.P. Michael). Not only do you hear it in his voice but on the DVD, in the smoke and mist and light traced outlines of the room, Robert often looks the spitting image of his dad too. It’s almost eerie. Robert stepped in to fill his dad’s shoes by supplying lead vocals and bass guitar in what has to be one of the most fitting tributes of all time. The rest of the call has shown up too: Jim Goodwin on keys, Tom Ferrier on guitar, and Scott Musick on the sticks and skins. All are essential parts making up the whole but special mention goes to Ferrier whose guitar effortlessly shines through. I’ve only two complaints about the releases: 1) the track listings blend between two concerts and so have some odd cuts and (2) Goodwin’s keyboard sounds a bit too thin, especially on the DVD. Complaints aside you get 14 cuts on the physical CD with the major players of course being involved. On the DVD you get some additional tracks not covered on the CD: “Think It Over”; “What’s Happened To You”; “Swim In the Ocean”; “The Morning”; and “Same Old Story”. Why they left “The Morning” off the physical CD I couldn’t tell you but by watching the DVD you can see what they changed in adding and leaving off of the CD format. Also importantly you get all of the songs if you purchase the MP3 version from Amazon. But fans WILL want to see the concert as well as hear it.

Are all of The Call’s LPs given some love over the course of this tribute? Let’s see. From their 1982 self-titled debut album we have: nothing. From their sophomore follow up “Modern Romans” we have: “Turn A Blind Eye”; “Modern Romans”; “The Walls Came Down”. From the underrated “Scene Beyond Dreams” we have: nada. From their tight “Reconciled” release we get: “Everywhere I Go”; “I Still Believe”; “Oklahoma”; “The Morning”. From the critically acclaimed “Into the Woods” we receive: “I Don’t Wanna”; “Into the Woods”. They broke big momentarily with their “Let the Day Begin” release so from this we get: “Let the Day Begin”; “You Run”; “Uncovered”; “Same Old Story”. From the lauded “Red Moon” we get: “Floating Back”; “You Were There”; “Red Moon”; “What’s Happened To You”; “Swim In the Ocean”. And from their final studio release “To Heaven and Back” we are graced with: “Think It Over” and on the DVD a looped bit of “Love Is Everywhere” on the main menu. [With all the wonderful songs we’re given I can live with what we’ve missed out on but wouldn’t it be great if they got together and recorded another live album that contained a few of their other greats like “There’s A Heart”, “Doubt”, and “Flesh and Steel” off of their debut, and “Tremble” or “Delivered” or “One Life Leads To Another” off of SBD, and “Even Now” off “Reconciled”, and “The River” or “It Could Have Been Me” off of ITW, and “Watch” off of LTDB, and “What A Day” off of RM, and “Soaring Bird” or “World On Fire” or “Love Is Everywhere” off of THAB? I suppose I’m dreaming but it’s great to dream, isn’t it?]

All of the songs are faithful to the original versions. Licenses aren’t shredded and liberties are not taken with the source material. It’s very respectful. But there is one moment, a standout moment, where the concert stands still in a moment of arrested time. Robert stands front and center and sings with warmth and compassion and sadness, just his voice and acoustic guitar, on one of The Call’s most spiritual songs—“You Run”. Robert inhabits the song, and haunts it. He is singing to himself as well as all of us, and remembering…”You can’t escape the reach of love.”

TDI-1
5.0 out of 5 stars Excellent tribute to The Call in remembrance of their lead Singer Michael Been by his son Robert.
Reviewed in the United States on April 30, 2018
Verified Purchase
If you like the call and would like a nice live album to listen to this is it. What is cool is that actually this is the Son of the original lead singer of the Call who passed away in 2010. His Son gives a great tribute here. There are many nice live differences to these songs. I caught the end of this on a TV special and thought for a minute that this might be old footage of the Call. There is a DVD version as well if you want to purchase it and watch it.
Read more
One person found this helpful
Helpful
Comment Report abuse

Dede
5.0 out of 5 stars I absolutely love this album
Reviewed in the United States on April 13, 2015
Verified Purchase
I absolutely love this album. I stumbled across the concert one day while surfing some channels on TV in order to DVR any upcoming concerts. I was a big Call fan and had not known about the tribute concert. I was so glad I came across it. It was really something truly special and heartfelt. I can only imagine the emotions all of them must have been feeling while playing those songs. Even from just watching the recording and not seeing it live, you could still sense and feel the energy and chemistry that was between Robert Been and the members of the Call. What was so great about it was that Robert didn't try to "recreate" the sound of the Call or imitate his father's voice. Obviously he can't do that since he and his father have much different musical styles. However, he interpreted those songs and used his vocal range to give them the respect they deserve. That was no easy task. The result was something pretty freak'n amazing. Robert's rendition of You Run and Uncovered will literally bring you to tears. I do hope they play together again and I get the chance someday to see them live. If you are a Call fan, you need to get this album. Also, if you are a BRMC fan, like I am, you should check this out to see this other side of Robert's musical abilities. Although much different from when he plays with BRMC, I don't think you will be disappointed. To the contrary, I think you will be quite impressed with his vocals. He is truly a talented musician.
Read more
6 people found this helpful
Helpful
Comment Report abuse

dylan2k
5.0 out of 5 stars A beautiful tribute from the son of a fantastic artist who died way too soon.
Reviewed in the United States on January 5, 2019
Verified Purchase
First of all I loved the Call. Second I love Black Rebel Motorcycle Club. Third I love family paying tribute to family. This is a triple winner and on top of all that it is fantastic music and for some reason it's ridiculously cheap. GET THE VINYL WHILE YOU CAN!!! You can't go wrong.
Read more

J. Baer
4.0 out of 5 stars Worthwhile
Reviewed in the United States on July 12, 2020
Verified Purchase
Nice, touching tribute to Michael Been from his son and the remaining members of The Call.
Read more
Helpful
Comment Report abuse

Debbie A
5.0 out of 5 stars Very very happy!
Reviewed in the United States on May 31, 2016
Verified Purchase
I love this CD. I saw this on TV, taped it and have watched it multiple times. When I saw that I could purchase one for my car I was ecstatic! I would highly recommend this to all my friends.
Read more
One person found this helpful
Helpful
Comment Report abuse

Dan S.
5.0 out of 5 stars Fantastic concert DVD
Reviewed in the United States on April 18, 2015
Verified Purchase
Fantastic concert DVD. Sound and Video are top notch to match such a band. The band is in fine form. Robert Been sounds uncannily like his Dad. R.I.P. Micheal Been.
Read more
2 people found this helpful
Helpful
Comment Report abuse
See all reviews from the United States

W. H. T. Oostende
5.0 out of 5 stars Five Stars
Reviewed in the United Kingdom on December 27, 2015
Verified Purchase
what a great cd, atmosphere is intens and Robert Been is matching his father's voice.
Read more
One person found this helpful
Helpful
Sending feedback...
Thank you for your feedback.
Sorry, we failed to record your vote. Please try again
Report abuse