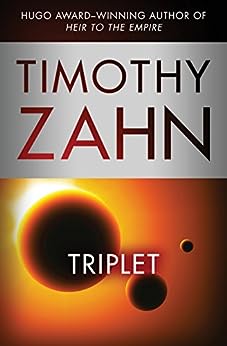 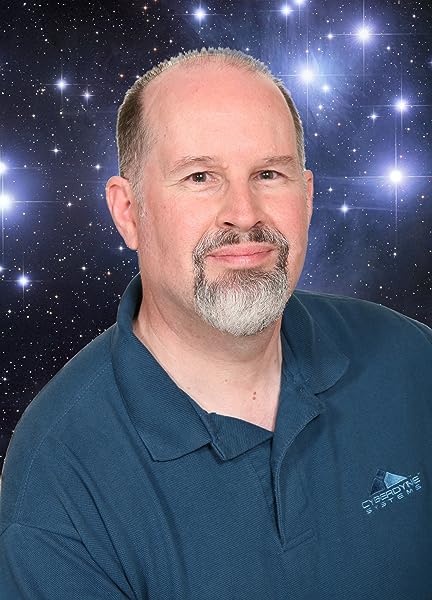 Timothy Zahn is a New York Times bestselling science fiction author of more than forty novels, as well as many novellas and short stories. Best known for his contributions to the expanded Star Wars universe of books, including the Thrawn trilogy, Zahn won a 1984 Hugo Award for his novella “Cascade Point.”He also wrote the Cobra series, the Blackcollar series, the Quadrail series, and the young adult Dragonback series, whose first novel, Dragon and Thief, was an ALA Best Book for Young Adults. Zahn currently resides in Oregon with his family.

4.1 out of 5 stars
4.1 out of 5
55 global ratings
How are ratings calculated?
To calculate the overall star rating and percentage breakdown by star, we don’t use a simple average. Instead, our system considers things like how recent a review is and if the reviewer bought the item on Amazon. It also analyzes reviews to verify trustworthiness.
Top reviews

Robert M.
3.0 out of 5 stars Sci-fi/fantasy blend, worth reading but the author has some annoying tendencies
Reviewed in the United States on December 28, 2014
Verified Purchase
Despite my 3-star rating, this book is actually pretty enjoyable to read. It's sort of a hybrid sci-fi/fantasy with space travel and aliens and interplanetary adventure, and then magic (or techno-magic) and spirits and demons and the like. It moves along pretty well, and has a mildly interesting plot. You just can't think about it too much.

The major irritation for me is that, on both "hidden" worlds - Shamsheer and Karyx, we have "magic" and spirits that operate by rules that are unknown to the reader, except insofar as the narrative reveals the rules. And it becomes evident that the rules are being broken, except in many cases the reader doesn't know that the rule being broken was a rule in the first place. Add to this a tendency for the characters to call upon heretofore unknown rules or principles to try to test or counteract the rules that are being broken, and you have the feeling that the author is just kind of making up new rules as he goes along, to fit the needs of the plot. And on top of this, it is stated that the opponents (the evil spirits?) are apparently not very smart, or very clever, or whatever, which allows the author to be even more sloppy about the plotting.

The Karyx "spirit handling" reminded me a lot of Harry Potter-style spells or incantations - I half-expected the characters to start calling out "Expelliarmus!" and so forth. And the Harry Potter books fell prey to some of the same drift in the "rules" of how magic works, so as to fit the plot.

The other annoyance is that the character development is really pretty weak. I never really got much of a feel for the characters of Ravagin, Danae, and Hart, or how their attitudes and relationships with each other developed. The romantic interest between Danae and Ravagin is built up from early on, but feels really forced.

Third annoyance is that the characters spend a lot of time summarizing what's happened already and thinking out loud (to the reader) about what might be going on (although sometimes the conclusions they jump to are not exactly obvious!) This is the second novel by Zahn I've read, the other being the Icarus Hunt, and in that one too it's like he wants to really spoon-feed all the plot points to the reader. I guess to extend the appeal to a young-adult audience?

But still, it's worth a read!

Unfortunately, the full potential of the concept is never played out, and the story only goes downhill from there. The main character, Danae, is fleeing from her pampered life as the daughter of some mega-wealthy man of influence, and her childish whining and petulant behavior (not to mention that she never calls her father anything but Daddy Dearest. Ew) definitely fit in with the spoiled brat stereotype.

Ravagin, her guide, is old enough to be her father, resents being assigned to her, and seemingly can't stand a word that comes out of her mouth, not to mention being made a subject in her psychology study, so it's interesting and a little gross when they very randomly seem to fall into bed with each other 2/3 of the way through the book and suddenly saving Danae is the only thought that can spur him to murder one of their enemies. There is no character development, no real development of a relationship... where did that COME from?

Hart, her bodyguard, follows her from the first world, Threshold, even though ALL of the guides there were supposedly warned that someone dangerous was following her and to not let him through, and he was actually captured for trying to bribe a guard, so they all know what he looks like. Nevertheless, he gets himself a guide and shows up in the nick of time to unselfishly sacrifice himself for Danae again and again. Actually, his apparent wish for suicide-by-heroing is his only personality trait. He's flat, boring, and emotionless, and if this guy was guarding a little kid, he wouldn't keep her from playing in traffic, he'd just jump in front of the car before it hit her.

Deux ex machina abounds, with characters growing conveniently suspicious and attacking or imprisoning our characters in situations that would probably not cause a rational person any or much suspicion. (Yes, a malfunctioning magic carpet brought them into the lord's dining hall where it should not have been able to go. And the two people ON it looked confused and alarmed and had no reason to want to be there. And technology had been KNOWN to be malfunctioning all over the place. But no, these PARTICULAR victims of malfunctioning technology must be the BLACK SORCERERS!) Characters conveniently appear (hello Hart) and vanish (goodbye, Guide who brought Hart in) as the author's needs and whims dictate. The dialogue is over-wrought, ridiculous, and expository, with at least one conversation ending with "I don't know why we're even having this discussion again." Yes, why are you?

I kept reading all the way to the end hoping it would get better, but it didn't. It just kept magically getting more and more stupid.
Read more
6 people found this helpful
Helpful
Report abuse

Kindle Customer
4.0 out of 5 stars Enjoyable mix of sci-fi and fantasy
Reviewed in the United States on June 24, 2013
Verified Purchase
This was a good read, not too long or in-depth, or long-winded as some works of fantasy can be (ahem...George RR Martin). I'm more familiar with Zahn as primarily Sci-fi so the blend here was rather neat. An imaginative series of worlds within worlds, each of which with a different blend of magic-technology. It offers an interesting take on how education changes our perception, and while it might seem far-fetched, there are still many today who view technology as magic because they do not understand the science involved.
Anyway, it was an enjoyable read. I prefer some of Zahn's other works but it was fun to take a trip off the beaten path and explore some new ideas. I did have some issues with the female lead. I tended to think of her as a snotty little Anakin Skywalker (minus any redeeming powers...like the Force). It was hard for a while to find her sympathetic in any way...in fact, I kind of just hoped she'd die so the main character could get on with his life. Eventually you get used to her rash decisions and acting out though.
Overall, an imaginative story and fun to read. I got it on sale for Kindle and if you can pick it up cheap it's definitely worth it for fans of Zahn and sci-fi/fantasy crossovers.
Read more
2 people found this helpful
Helpful
Report abuse
See all reviews

Michael G
5.0 out of 5 stars Love the storyline
Reviewed in Canada on February 21, 2020
Verified Purchase
Been looking for this book for a while! Arrived sooner than I thought, in a carefully wrapped package! Thank you :)
Read more
Report abuse

Carl Doucet
5.0 out of 5 stars Great story!
Reviewed in Canada on June 26, 2013
Verified Purchase
I know Timothy Zahn from the Star wars universe in which he wrote a few very great books, I believe this one is one of his early books and it is really great!
Read more
One person found this helpful
Report abuse