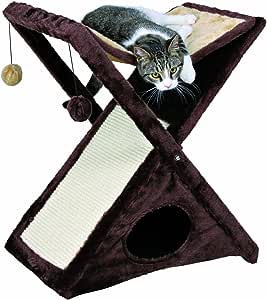 Trixie's miguel cat scratching tower's unique design is ideal for small spaces. Simply fold it up for quick and easy storage. While in use, it will provide endless opportunities for cats to play, explore, scratch or just relax. Felines can sharpen their claws on the durable sisal scratching surface instead of on your furniture or carpet, giving them a healthy outlet for their scratching instincts. Spunky cats can jump, climb or perch in the plush hammock and lie in wait for unsuspecting prey or just relax and enjoy the view. for a cozy retreat, they can crawl inside the soft sided condo with a plush insert. The neutral browns make this piece of cat furniture easy to integrate into your home décor. Suitable for cats of all ages and activity levels. One year warranty. Color brown and beige. Dimensions 21 by 14 by 26-Inch. Weight 11-pound

4.2 out of 5 stars
4.2 out of 5
1,130 global ratings
How are ratings calculated?
To calculate the overall star rating and percentage breakdown by star, we don’t use a simple average. Instead, our system considers things like how recent a review is and if the reviewer bought the item on Amazon. It also analyzes reviews to verify trustworthiness.

Paws
4.0 out of 5 stars Me-wow. On our 2nd one.
Reviewed in the United States on April 21, 2015
Color: Miguel, brownVerified Purchase
This is our 2nd kitty throne. Our first one broke because our cat ran into it full force and crashed it into the window. She LOVES this thing. Only thing I will recommend is to take the hanging balls and staples off the side. She got the string wrapped around her paw (she was screaming) and then the staple came half way out and punctured my finger open. Other than that, this thing is great!
Read more

karen
1.0 out of 5 stars Be aware
Reviewed in the United States on December 27, 2016
Color: Miguel, brownVerified Purchase
I RARELY write reviews, but feel that there are some things that anyone considering buying this should know.

1. It's not very stable. My 1 year old cat weighs 8.2 pounds and it's ok for her, but as she gets bigger I will have to figure out a way to weigh it down so it doesn't tip over when she jumps up into the hammock.

2. The material is flimsy & the stitching isn't durable. After 2 days one of the seams on the top came apart. I used my cheap staple gun to attach it to the frame because she sleeps in the hammock alllll day. The frame didn't feel very sturdy either so I doubt it will last very long. I hope it does because she loooves it.

3. The bottom is most likely cardboard with material sewn over it. I will at some point replace the cardboard with some plywood & padding to make it more stable.

I just got my kitten so my other 16 pound cat has not used it yet, but I'm sure he will the first opportunity he gets. I don't recommend getting this if your cat is more than 5 or 6 pounds

Kate Leopold
5.0 out of 5 stars The kitties love it!
Reviewed in the United States on June 17, 2015
Color: Miguel, brownVerified Purchase
My cats are obsessed with this! It look them a few days to start using it, but now they love it now and play/sleep in it every day. The little hammock seems like it would be awkward for them to lay in, but nope! As you can see from the pic, it's very cozy. Two very satisfied kitties.
Read more

ShereTop Contributor: Anime
4.0 out of 5 stars Works perfectly well, with some caveats
Reviewed in the United States on August 10, 2017
Color: Miguel, brownVerified Purchase
We needed something that was roughly desk height for the cat to lounge on, since evidently not being able to see what I'm doing on the computer was causing some undue anxiety for her.

This stands at just the right height for that, and seems to be liked enough, though I do have a few comments:
- Our cat is 15.2lbs, and while that's on the upper end of the housecat weight spectrum, in my experience it's not all that uncommon. Given this, she FITS in the sling bed perfectly well, but it seems to lack ample support for one of her girth. We've remedied this by stuffing a pillow in the wedge underneath the hammock. This seems to do the trick, and now she sleeps there for hours at a time. She's there as I write this!
- The little balls attached to the edge were simultaneously well received and short lived. She pulled both off inside of the first two hours of ownership.
- The underneath portion is a bit snug. She uses it from time-to-time but it was neither why we bought it nor is it regularly used.
- I cannot comment at all to the collapse function of the tower, as it has never been put away since we received it. If that's important to you then it's here that I'd defer to other reviews.

Overall, I've purchased things that have been enjoyed less. If I had to say, I'd recommend it for anyone with our particular need.
Read more
31 people found this helpful
Helpful
Comment Report abuse

Kala R Yamen
4.0 out of 5 stars Definitely Recommend
Reviewed in the United States on December 19, 2014
Color: Miguel, brownVerified Purchase
I just got this and one of my kitties is already relaxing on the top, hammock part. She hasn't tested out the rest but is now fast asleep on the top. I did notice when she was grooming herself on it, it did move quite a bit, but it didn't bother her at all. She weighs 8 pounds. It looks pretty nice and the quality is what I expected.
Read more

This cat tree is nice and compact, so it doesn't overcrowd the room, but it still has a lot of options for my cat to interact with it: a hiding place, two different ledges to jump up on, scratching posts, even a little dangle ball. She was actually trying to scratch it and play with it while I was still putting everything together! And as soon as I got it up, she took right to it, no prompting or catnip bait required.

However, I do have to knock off a star because the main post is a little wobbly; it doesn't feel like it's going to fall over or anything, but the whole thing shakes a little when my cat moves around on it. She's a small cat, so if your cat is bigger/heavier, this might not be the best option for you. It might also be slightly unstable because of the other reason why I'm dropping a star: according to the instructions, it was supposed to include an Allen wrench, but there was none to be found in the box. I managed to get everything pretty tight with other tools, but having the Allen wrench that was meant to fit the screws would have made assembly a lot faster. However, nothing else was missing and it was actually fairly easy to construct, so I can't complain too much.

For the price you pay, this is a good overall cat tree, especially if you're looking for something smaller but still entertaining. Shipping was fast and assembly wasn't too bad. I would say that my cat and I are satisfied with this product.
Read more

V
4.0 out of 5 stars big cat review
Reviewed in the United States on January 8, 2016
Color: Miguel, brownVerified Purchase
My cat isn't really into toys and such but i needed a travel cat post. It's bigger than I expected really but I don't think it's made to last. I saw a piece of the scratching wall lift up after only 2 days but it's still attached. My big (~16lbs) cat could fit in either compartment if he wanted as I have seen him curl up into smaller areas. I will continue to coax him with cat nip and hopefully he'll take to it bc it really it a pretty cool idea.
Read more

gillian cairns
5.0 out of 5 stars Saves the furniture
Reviewed in the United Kingdom on December 2, 2019
Color: Pepino, brownVerified Purchase
Both my cats love this post but they fight over the bed had to buy a second one to keep the peace.
Glad they use the scratch post rather than the carpets or furniture to scratch on
Read more
Report abuse

Page 1 of 1 Start overPage 1 of 1
This shopping feature will continue to load items when the Enter key is pressed. In order to navigate out of this carousel please use your heading shortcut key to navigate to the next or previous heading.
Back
Next
Pages with related products. See and discover other items: carpet cat scratching post, cat condo, cat scratching furniture, top cat furniture, unique cat tree, unique cat trees