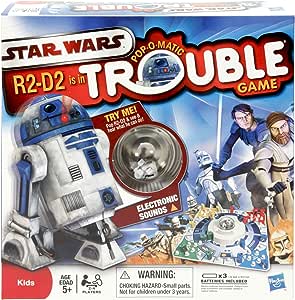 Brand: Hasbro Gaming
4.6 out of 5 stars 185 ratings
Available from these sellers.

New pop-o-matic R2-D2 Trouble! Engage kids in a new way with the Clone Wars animated R2-D2.The game play of Trouble with the Clone Wars R2-D2 character combine to create a unique Clone Wars Trouble experience. Includes real R2-D2 electronic sounds. Be the first to get your pawns home to win!Trouble is a board game with a simple concept: Be the first player to send your four game pieces all the way around the board, moving spaces determined by rolls of the dice. The "trouble" of the title comes when an opponent's piece lands on a space occupied by your piece, thus sending yours back to the beginning. Parents will likely remember the game from their youth, or at least remember the game's signature gimmick, the pop-o-matic dice roller. The Pop-o-matic is a dome-shaped clear plastic housing for the dice in the center of the board game that automatically tumbles the dice when pressed down and released. This feature, plus the board's plastic slots that hold the game pieces in place, make Trouble a perfect travel game--car or boat motion won't upset the game's progress. It is indeed satisfying to press, slap, or pound the pop-o-matic. It's strong enough to withstand the frustration of the losing player(s). The game's simplicity makes it easy to jump into without elaborate explanations or practice games for new players.

4.6 out of 5 stars
4.6 out of 5
185 global ratings
How are ratings calculated?
To calculate the overall star rating and percentage breakdown by star, we don’t use a simple average. Instead, our system considers things like how recent a review is and if the reviewer bought the item on Amazon. It also analyzes reviews to verify trustworthiness.

C. Anderson
4.0 out of 5 stars Perfect for Trouble and Star Wars Fans!
Reviewed in the United States on May 30, 2013
Verified Purchase
Of which I have three, ages 3, 5, and 8. As a family, we generally play some form of "Trouble" several times a week. When our old "Scooby Doo Pop-n-Race" wore out, I got this as a replacement.

It has some very exciting features. There is a little R2D2 figure inside the pop bubble with the die, and an electronic sound chip that makes several different R2D2 sounds each time you pop. The game pieces have stickers you put on them, each color consisting of a different "team" of Star Wars characters, such as C3PO, Anakin Skywalker, Obi-Wan Kenobi, Droids, General Grievous, Count Douko,Clones, etc. (Forgive my misspellings if you are a die-hard Star Wars fan).

The game board is set up exactly like regular "Trouble." The same number of spaces, etc. But there are some additional simple "Star Wars" rules you can choose to that make the play more interesting. For example, if you pop and R2D2 lands standing upright, that counts as a "6" in addition to whatever is on the die. So, if you get a four, but R2D2 is standing up,you have a 6 and a 4 to use as you wish, and you get to pop again. You can move one pawn 10 spaces, or you can get one pawn out and move it four spaces, or you can split the move between two pawns, either getting one out or moving one six spaces, and moving another four spaces. If R2D2 is upright, that counts as a six and the player can pop again.

My 4-star rating is for durability and packaging. The box is flimsy! Such thin cardboard--no heavier than a cheap postcard! Whatever happened to good, durable game boxes like they used to make! Grrr. Also, the game board has a thin cardstock placed over a plastic molded form. Not the sturdiest design. Good enough, but not the best. They just don't make things like they used to!

Our family has some customized rules for "Trouble" that make the game more interesting, faster-paced, and less tedious. We say you can get a pawn out on a six or a one, but you can only pop again with a six. We also say if you get a three, you can choose to move forwards or backwards, but you cannot back up into your home space--you can back up past your home space to move into it on your next turn. So, for example, a great start to a game is to get a "6" to get out, and then on the second pop get a "3", and you are poised to have a pawn home by your second turn (doesn't happen too often, but often enough to be fun!) It is also great to move backwards in the middle of the board if you need to send someone home to keep them from beating you!

Makes no sense to me, but fun for them!

It is a very nice feature that you can turn the sound off with a switch if you like (but it doesn't matter here because my boys all make Star Wars sounds when playing), and play without the sound. But the sound is not really annoying. It's actually kind of cute. The first time we heard it, it made us chuckle.

Reader12
5.0 out of 5 stars Great sounds, we love it
Reviewed in the United States on July 16, 2019
Verified Purchase
My son has autism and played this at an event once. We returned to the event two years later and he remembered it and immediately went looking for it. We found it, but the game had been so used that the sound didn't work and things were missing so I immediately ordered one. He loves it. The noises are super funny, loud enough to hear well and make him laugh. Trouble is one of the only games he can play easily and we own many variations but this one is a favorite for him and even for his buddies that come over to play with him.
Read more
Helpful
Comment Report abuse

A. Hamilton
3.0 out of 5 stars Not classic Star Wars characters, cheaply made
Reviewed in the United States on May 29, 2015
Verified Purchase
So let me start with the positives. The game works as it should -- it pops and the dice flips. The coolest thing about it is that when you pop it, it plays a variety of R2D2 sounds. My 4 year old son is loving playing it. Now the cons. It's pretty cheaply made -- the board itself has a cardboard overlay that sits on top of the plastic. The game pieces are plastic and come with separate stickers that you put on yourself. Lastly, (this is a negative to me but maybe not to everybody) the game piece characters are from episodes 1-3 instead of 4-6. I'm attaching photos showing the characters and quality.
Read more

D_12
1.0 out of 5 stars Looks like fun but we won't know...
Reviewed in the United States on February 17, 2020
Verified Purchase
We have not opened the box yet because it arrived damaged from the seller ToyPlanet. Amazon box was perfect. Game box crumpled in corner. Inventory label stuck on front and lower center! The R2D2 does not work.
SO DISAPPOINTING.
Read more
Helpful
Comment Report abuse

Tbubbles
5.0 out of 5 stars Family Game Night!
Reviewed in the United States on July 19, 2016
Verified Purchase
Fun twist on a classic game. How can you not love anything that has R2-D2 sound effects?! The characters that it comes with are from the Clone Wars. I purchased one that had a discounted price and was marked as used, however, I think it just had a damaged box. Everything inside was new and the box wasn't even horribly damaged.
Read more
Helpful
Comment Report abuse

Mia
2.0 out of 5 stars Disappointment
Reviewed in the United States on July 14, 2017
Verified Purchase
Had this game less than a year and the sound quit working months ago. I thought it was the batteries and kept changing them out. No luck. The sound was what made this game attractive for the kids. Very disappointed.
Read more
One person found this helpful
Helpful
Comment Report abuse

Caraboo
5.0 out of 5 stars FUN GAME
Reviewed in the United States on December 29, 2013
Verified Purchase
I bought two of these. One for my kids and one for my niece. This game was a huge hit. Fun sound effects too. Bonus, if the batteries die in this game it does not prevent you from playing. It just stops the sound. Easy game for younger kids to play. I did draw arrows with a sharpie on the gameboard just to remind the kids which way to rotate around the gameboard.
Read more
Helpful
Comment Report abuse
See all reviews

alanrg
5.0 out of 5 stars Five Stars
Reviewed in the United Kingdom on July 4, 2014
Verified Purchase
kids loved it a little like frustration
Read more
Report abuse

Wowsey
5.0 out of 5 stars With bee-booping R2!
Reviewed in Canada on September 11, 2013
Verified Purchase
Bought as a gift, I knew this would be a hit as Trouble is a great, classic game. The Star Wars theme makes it visually pleasing but the icing on the cake is that every time you press the bobble to roll the R2 dice, he speaks his beeping language! This game made our Christmas afternoon with my 3 and 5 year old nephews.
Read more
Report abuse
See all reviews
Pages with related products. See and discover other items: all hasbro games, car travel games, hasbro board game, roller game, sound game, unique board games