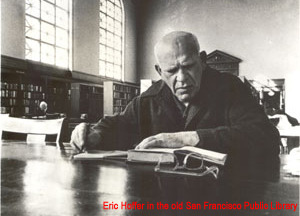 "Its theme is political fanaticism, with which it deals severely and brilliantly...." -- The New Yorker

"One of the most provocative books of our immediate day." -- Christian Science Monitor

A highly provocative, bestselling analysis of the fanatic -- the individual compelled to join a cause, any cause -- and a penetrating study of mass movements from early Christianity to modern nationalism and Communism.

Reporting on the true believer, Air Hoffer examines with Machiavellian detachment mass movements, from Christianity in its infancy to the national uprisings of our own day. His analysis of the psychology of mass movements is a brilliant and frightening study of the mind of the fanatic, the individual whose, personal failings lead him to join a cause, any cause, even at peril to life -- or yours.

Eric Hoffer (1902 -- 1983) was self-educated. He worked in restaurants, as a migrant fieldworker, and as a gold prospector. After Pearl Harbor, he worked as a longshoreman in San Francisco for twenty-five years. The author of more than ten books, including The Passionate State of Mind, The Ordeal of Change, and The Temper of Our Time, Eric Hoffer was awarded the Presidential Medal of Freedom in 1983.

4.4 out of 5 stars
4.4 out of 5
68 global ratings
How are ratings calculated?
To calculate the overall star rating and percentage breakdown by star, we don’t use a simple average. Instead, our system considers things like how recent a review is and if the reviewer bought the item on Amazon. It also analyzes reviews to verify trustworthiness.
Top reviews

Aranhas
5.0 out of 5 stars A must read today
Reviewed in the United States on July 25, 2020
Verified Purchase
I first read this book in a college class in the 1960s - "the good old days". Hated it. Didn't impact me. I was just back from four years in the military in Asia and didn't have time for psycho-philosophy. I don't know why, but I kept the book over 60 years stuck somewhere in a box. I found it a couple of years ago and now that I've "grown up", I finally realize what an amazing book it is. Eric Hoffer nailed it. Want to know what's going on with the wackos burning Portland and Seattle? Here it is. Want to know why Nadler, Schiff, and Pelosi have gone nuts? Here is is. Want to find out how to set the world straight again? Forget it. There is nothing you can do with true believers. They stay that way and harden up. There is a lot going on in this little book. I sent my two sons copies because I can't explain the idiotic madness. Eric will have to do it for me. I'll bet the commie professors don't include this on their reading lists anymore.
Read more
4 people found this helpful
Helpful
Comment Report abuse

rsw
5.0 out of 5 stars An essential look at the mind of the fanatic. ...
Reviewed in the United States on August 15, 2017
Verified Purchase
An essential look at the mind of the fanatic. This unflinching look at the origins and dangers posed by mass movements of all persuasions is untainted by personal politics. In this text, Hoffer is interested in the people who join mass movements - who they are and why they sign up. There is a lot of wisdom, common sense, and clear thinking in this little book. Unfortunately, the lessons here will be rejected by those who need most to hear them - those people who cannot separate thought from emotion. Written around 1951, it's aim is still true.
Read more
2 people found this helpful
Helpful
Comment Report abuse

Brett Williams
4.0 out of 5 stars Useful in any era
Reviewed in the United States on October 6, 2002
Verified Purchase
“Believer” is insightful if not always well written. The disjointed nature of some one or two line sections leaves support for their conclusions vacant, making them sound pushy. Hoffer does not allow devotion and dedication sourced in conviction and confidence. For Hoffer the holy cause is always a substitute for a loss of faith in oneself. The theme is that all mass movements – good, bad, Left, Right, social, religious, national – share a family likeness. Mass movements generate a proclivity for united action (challenge not welcome), fanaticism, fervent hope, hatred, intolerance, and release powerful human energy demanding blind faith and single-hearted allegiance. “For though ours is a godless age,” writes Hoffer, “it is the very opposite of irreligious.” Sure to raise hackles, Hoffer writes, “The hammer and sickle or swastika are in a class with the cross.” But he does not mean they are equivalent movements, only that they have equivalent features. In a nutshell, this is human behavior with reason removed, a tool of the passions. Which is not to imply movements have no good rewards. As Hoffer notes, some have organized, and others helped shake the West out of Dark Ages. Interestingly, movements have stages of development from initial radicalism to eventual conservatism in which those attracted seek careers in the new order, not to mold a new world, but to preserve the present. From zeal to orthodoxy. Good book.
Read more
14 people found this helpful
Helpful
Comment Report abuse

Amazon Customer
5.0 out of 5 stars Life Changing Book
Reviewed in the United States on September 19, 2016
Verified Purchase
I first read this as an undergrad about 30 years ago and it has stayed with me ever since. I recommended to my brother countless times and he never read it. I sent him a copy and he raved about it. So far his has turned about five friends on to it and they also think it is amazing. If you want to understand a lot of politics and people's motivations read this.
Read more
5 people found this helpful
Helpful
Comment Report abuse

Bonni Blodget
4.0 out of 5 stars Three Stars, no mass
Reviewed in the United States on June 6, 2016
Verified Purchase
His subject mater is very good but I have a touch time with some of his claims. He states that one third of the agricultural land in Russia was owed by the peasants before the start of the revolution. . .one third! Oh and by the way, Russia is no small nation. Though his claim is backed up by reference to another book, I have a tough time with that kind of reasoning. Another author doesn't make it true. This type of reasoning is throughout.
Read more
One person found this helpful
Helpful
Comment Report abuse

Tom Foreman
5.0 out of 5 stars Forever relevant
Reviewed in the United States on October 11, 2001
Verified Purchase
When, a few years ago, I became aware of the terrorist network of Bin Laden I could not help but think back to this excellent, concise book by Eric Hoffer.

It was written in 1951 and I first read it sometime in the early 70s. Hoffer is, in my humble opinion, one of the greatest observers of the human condition ever. All his works are short, concise, with no wasted words or hyperbole.

After the attack of September 11 and all of the pundits attempting to tell us why, I kept thinking, "they are missing the real story". Upon rereading "True Believer" this weekend I was reminded of how right he has it. By delving into the history of civilization's upheavals he explains how and why we continue to see this phenomenon and how it may play out.
Read more
20 people found this helpful
Helpful
Comment Report abuse

S. Barrett
5.0 out of 5 stars The definitive work on "true believers".
Reviewed in the United States on June 24, 2018
Verified Purchase
I first read this book in the 1960s, it's the classic study of authoritarian movements. Still recommended reading for today.
Read more
Helpful
Comment Report abuse

Negrodamus
5.0 out of 5 stars Five Stars
Reviewed in the United States on July 8, 2017
Verified Purchase
Great for philosophy majors, or people interested in politics or political science like me!
Read more
One person found this helpful
Helpful
Comment Report abuse
See all reviews