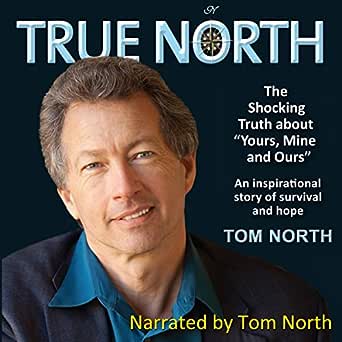 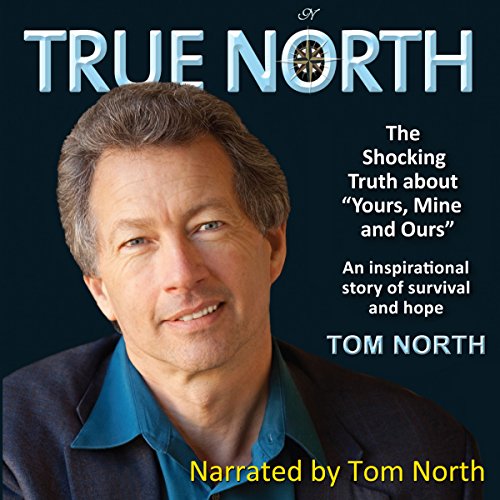 True North: The Shocking Truth about Yours, Mine and Ours

True North: The Shocking Truth about Yours, Mine and Ours
Tom North (Author, Narrator), True North Productions, LLC (Publisher)
Get this audiobook free.
$14.95/mo after 30 days. Cancel anytime

3.2 out of 5 stars
3.2 out of 5
45 global ratings
How are ratings calculated?
To calculate the overall star rating and percentage breakdown by star, we don’t use a simple average. Instead, our system considers things like how recent a review is and if the reviewer bought the item on Amazon. It also analyzes reviews to verify trustworthiness.

Elizabeth G Melillo
VINE VOICE
3.0 out of 5 stars Mostly about Tom's own life
Reviewed in the United States on August 23, 2017
Verified Purchase
Those of us who are old enough to remember when everyone had seen "Yours, Mine, and Ours" (and younger children even played at being that family) would not have wanted 19 people in the house - but it made for the sort of comedy which appealed to 'family values,' and did contain a few insights from the 'wise' characters of the parents. I think that many of us realised the film was a comic adaptation, and that the book "Who Gets the Drumstick?" fit into the 'inspirational family' model which many authors (most much better ones than Helen North) used during the era. The passages I found most interesting in "True North" were those which gave some insight into Helen's reasons for marrying Frank - and for hiding what was truly going on within that household. They will seem bizarre - but those of us who knew a few 'martyrs' with religious dedication will not be totally shocked.
Catholics who remember the era will be saddened, but not surprised, that Tom's attempts to find help from a priest (in a parish where he was an altar boy) led to his being told he had sinned in speaking badly of his stepfather - and that the priest immediately telephoned Helen to report the 'sin.' It was tragic, in that era, that parents were 'always right' - and to speak ill of one's parents, even in grave situations, was against the commandment to 'honour.' That Tom found his spirituality elsewhere is understandable - and far healthier.
However, such insights are few. The majority of the book is about Tom's own pursuits - which are only mildly interesting. There is not terribly much about the other North children, and the Beardsley siblings seem vague.
Those looking for extensive information about the North-Beardsley family will not find terribly much here. The insights are fascinating, however sad, but they are scattered and rare.

Indy Fan
1.0 out of 5 stars I was very disappointed in this book
Reviewed in the United States on April 10, 2018
Verified Purchase
I was very disappointed in this book. While I believe most of what he wrote is true I expected a much more in depth story about his childhood, parents, siblings and step siblings. Instead most of the book was basically just a rather boring auto-biography of his life. It seems somewhat obvious he wasn't able to talk about his Beardsley step-siblings and some of his North siblings for legal reasons so it was a very limited story of his childhood. The title of the book is rather misleading since most of the book was just about himself. If I had read some of these reviews before I bought the book I would have never purchased it.
Read more
16 people found this helpful
Helpful
Comment Report abuse

katt
2.0 out of 5 stars Should have been called TRUE NORTH and how I learned to meditate.
Reviewed in the United States on August 7, 2019
Verified Purchase
This was a good story but in the middle it bogged down his learning to meditate. It was suddenly a different book almost. The parts about meditation were long and boring and I had to skip pages and pages.
His stepfather was a monster.
Would like to know more about the rest of kids.

sew granny
2.0 out of 5 stars All about me
Reviewed in the United States on October 4, 2019
Verified Purchase
I was very disappointed in this book. It was mostly about the author and his meditation. Very little was about the family. I would have like to hear how the other children turned out. I did not read the reviews before I bought the book, so I feel my $24.95 could have been spent more wisely.
Read more
One person found this helpful
Helpful
Comment Report abuse

Sheri Heffner
4.0 out of 5 stars Unbelievable!
Reviewed in the United States on October 5, 2020
Verified Purchase
I bought the Kindle edition pf this book and liked it. I will never think the same way the next time I see the movie Yours Mine and Ours. Frank Beardsley was a drunken psycho who molested his own daughters and sons and his adopted children too. The North children wete told they were going to be adopted whether they liked it or not. When they were making the hit movie starring Henry Fonda and Lucille Ball the stars came to visit the real life Beardsley family. Lucy came up to Helen and told her "Keep him (Frank) away from me." The sicko obviously hit up on Lucy. I would have liked to know about what happened to Tom's adoptive brothers and sisters. There was some boring parts whete Tom went to these hippie places to "Find himself."
Read more
Helpful
Comment Report abuse

Amazon Customer
5.0 out of 5 stars Intetesting
Reviewed in the United States on December 8, 2019
Verified Purchase
This was Christmas gift. Person requested it because she heard it was great read.
Read more
Helpful
Comment Report abuse