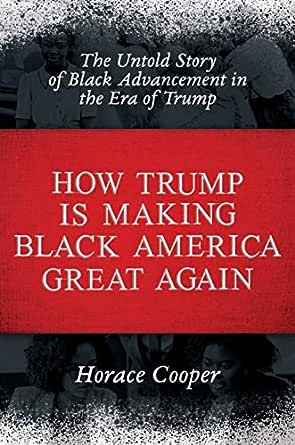 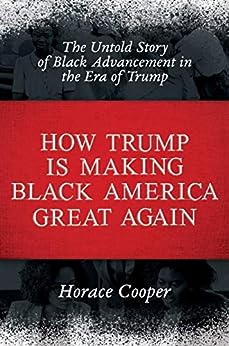 How Trump is Making Black America Great Again: The Untold Story of Black Advancement in the Era of Trump Kindle Edition

“Horace Cooper’s incisive strategic insights applied to the plight of Black America under President Trump are forceful and timely. The traditional civil rights establishment has found itself increasingly marginalized amidst the Democratic Party’s shift away from African Americans as the ‘most favored minority’ towards illegal immigrants from south of the border. Cooper’s call for a realignment of political priorities among Black Americans is a clarion call for a new self-Emancipation off the Left’s ‘political plantation.’”

“I have known my brother Horace Cooper for over thirty years and can attest to his intelligence, integrity, and strong adherence to conservative Christian values. When he advocates conservative social values as a prescription for what ails Black America, he’s speaking from personal experience. How Trump is Making Black America Great Again is sure to become a seminal text. It will stand the test of time.”

“Horace Cooper makes an elegant and convincing case for how Trump’s policies can and have worked for black America. He writes with clarity and unique insight. This is a must read, not only for black Americans concerned with their future, but also for any American who seeks to appreciate the impact of Trump’s core economic and social agenda. I have been working with Horace as a guest and a friend for as long as I can remember. And much like the relationship between student and sensei, just when I think I have everything I need to know about the Constitution, he presents me with a new intellectual challenge. When the topic of complicated Constitutional issues come up, he is at the top of my list for on-air booking.”

“Horace Cooper is one of the most insightful voices in America today. Whether you like Trump or not, this book will give you a lot to think about. Ignoring Horace is a big mistake.” -- Peter Schweizer, Bestselling Author of Profiles in Corruption and Clinton Cash

"That's why everyone buys your book, you always make a lot of sense."  -- Brian Kilmeade --This text refers to the hardcover edition.

Horace Cooper is a senior fellow with the National Center for Public Policy Research, co-chairman of the Project 21 National Advisory Board, and a regular television commentator on major networks. Horace taught constitutional law at George Mason University in Virginia and served as senior counsel to U.S. House Majority Leader, Dick Armey. --This text refers to the hardcover edition.

5.0 out of 5 stars
5 out of 5
31 customer ratings
How does Amazon calculate star ratings?
Amazon calculates a product’s star ratings based on a machine learned model instead of a raw data average. The model takes into account factors including the age of a rating, whether the ratings are from verified purchasers, and factors that establish reviewer trustworthiness.
Top Reviews

Kindle Customer
5.0 out of 5 stars A Very Informative Book
Reviewed in the United States on July 16, 2020
Verified Purchase
A list of what our President Donald Trump has achieved for African Americans since he came to office. Yes, it fills a book. One thing stand out - Our President is not a racist.
Read more
9 people found this helpful
Helpful
Comment Report abuse

DubT
5.0 out of 5 stars Great Book
Reviewed in the United States on July 9, 2020
Verified Purchase
Incredibly thoughtful and a fantastic read on the state of politics and race in 2020.
Read more
7 people found this helpful
Helpful
Comment Report abuse

Robert J
5.0 out of 5 stars How Trump has helped Black America
Reviewed in the United States on July 22, 2020
Verified Purchase
Horace Cooper discusses many of the Trump policies and how they have helped Black America. He has lots of facts and examples to back every conclusion. A very hopeful discussion that you will never hear from the mainstream media.
Read more
3 people found this helpful
Helpful
Comment Report abuse

Mary L. Dillon
5.0 out of 5 stars The truth
Reviewed in the United States on July 26, 2020
Verified Purchase
Read about the true effects of the Trump presidency. You won't hear this from the highly biased popular media. Don't be fooled anymore!
Read more
4 people found this helpful
Helpful
Comment Report abuse

Amazon Customer
5.0 out of 5 stars enlightening
Reviewed in the United States on August 2, 2020
Verified Purchase
a must read for all Americans......especially liberals...... insightful, fact filled with copious referneces...Horace Cooper deserves a national pulpit to promulgate the truth ........an important read
Read more
Helpful
Comment Report abuse