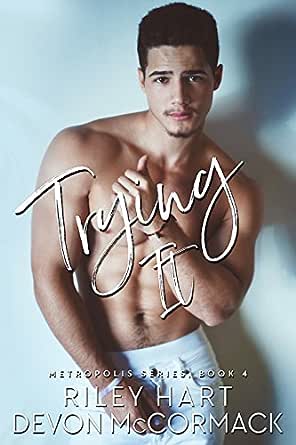 You've subscribed to Metropolis! We will preorder your items within 24 hours of when they become available. When new books are released, we'll charge your default payment method for the lowest price available during the pre-order period.
Update your device or payment method, cancel individual pre-orders or your subscription at
Your Memberships & Subscriptions
There was an error. We were unable to process your subscription due to an error. Please refresh and try again. 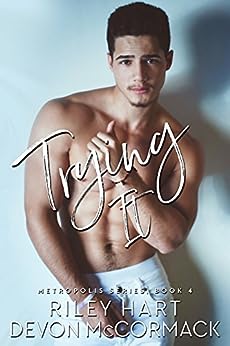 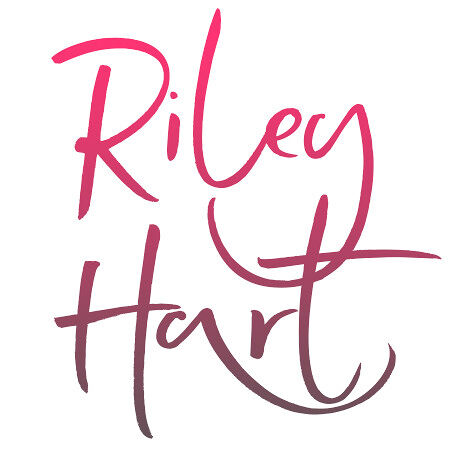 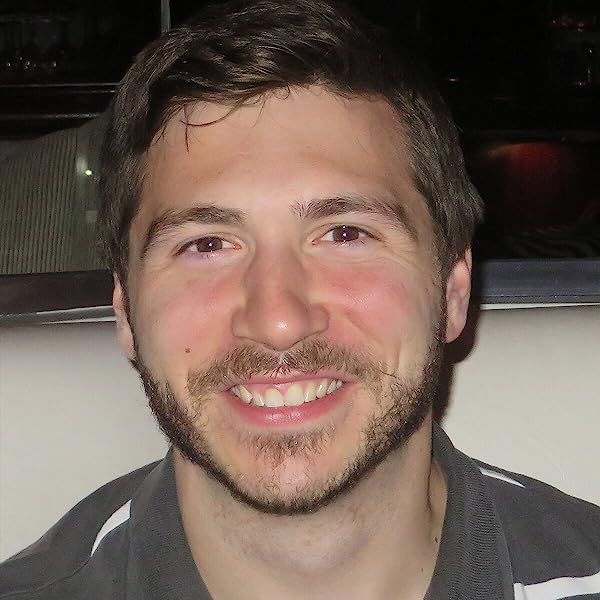 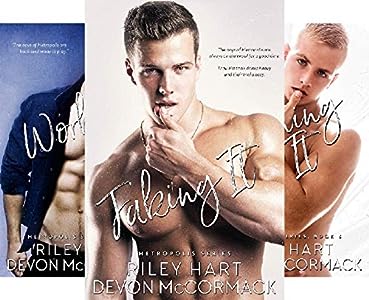 4.3 out of 5 stars
4.3 out of 5
136 global ratings
How are ratings calculated?
To calculate the overall star rating and percentage breakdown by star, we don’t use a simple average. Instead, our system considers things like how recent a review is and if the reviewer bought the item on Amazon. It also analyzes reviews to verify trustworthiness.
Top reviews

Chris Sherman
2.0 out of 5 stars repetitive
Reviewed in the United States on January 19, 2019
Verified Purchase
I have enjoyed the previous installments in this series, but this book left me anxiously awaiting the end. The writers kept saying the same thing over and over to the point I found myself skimming sections of the the characters' whining. If a reader is into puppy play or wants to know more, this may be the book to read; the authors certainly spend enough time in the narrative reiterating that there is nothing wrong with dressing up in leather like a dog and chasing one's own tail. They also take a decent stab at explaining chronic depression, and fortunately that does not get the heavy-handed overkill of the puppy play kink. The best scenes in the novel are the ones in which there is interaction with Frankie's mother. The flaw in this novel seems to be the authors trying too hard.
Read more
4 people found this helpful
Helpful
Report abuse

Swaffy67
5.0 out of 5 stars What a good boy..........
Reviewed in the United States on May 1, 2018
Verified Purchase
Wow.....just wow! I just can't believe that the Metropolis boys are not going to come around again, with this being the last in the series.

I just fell in love with Evan and Frankie! I wanted their story after reading Faking It 3.5 novella, and I am so glad that we got it. The premise of this story is a new kink for me and I have to say that Riley Hart and Devon McCormack did a wonderful job explaining it. Not just the physical but the emotional aspect of it and I found it beautiful. Of course we saw these two getting together, but the journey was fun to read. And can I just say that everyone needs a Frankie in their lives......these two were sweet and salty all at the same time and it was a great ride.

Of course, we got to see Derek, who is one of my top 10 book characters of all time. I just absolutely love him and it was good to see Daddy Jackson still keeping him in his place.

This series is fabulous and it was great to see the guys again. I loved seeing Superass and Trav getting married and just makes you wonder about the future of the rest of them. You just know they will still be together after finding their soul mates.

Thanks for the wonderful series Riley and Devon!
Read more
One person found this helpful
Helpful
Report abuse

Sue Allen Milkovich
5.0 out of 5 stars FRANKIE AND EVAN ARE DEEP AND ADORABLE
Reviewed in the United States on May 11, 2018
Verified Purchase
Riley Hart and Devon McCormack are one sensational, passionate writing duo. They create down to earth, funny and some outrageous characters but your guaranteed to fall in love with all of them. The METROPOLIS BOOKS can ALL be read separately as standalones. BUT this is one wicked, sexy, beautiful series.
This story is about the friendship between Frankie and Evan. Frankie is the all around great guy, friend to every one, there for everybody. Evan is the newest guy on the scene at the Metropolis condos where most of the other friends live. Evan has a troubled past with one of the guys but they're working through it. Frankie, the caregiver can't help but take Evan in under his wing. The fun, love and caring in this group of close friends is refreshing to read about. The experience and understanding that Frankie and Evan share, melted my heart. Books like this are the reason I read this genre exclusively. I love romance, love, hot sweaty insta-wet moments and happily ever after. Oh, also NOTHING beats a well thought out EPILOGUE. I HIGHLY RECOMMEND THIS BOOK AND THIS FANTASTIC SERIES!!!!!
Read more
One person found this helpful
Helpful
Report abuse

Julie R. Leopold
5.0 out of 5 stars Sexy and fun!!
Reviewed in the United States on April 28, 2018
Verified Purchase
Trying It Review

I was so excited to return to Metropolis!! I love these boys so much. In this final installment, we get to meet Frankie and Evan. Important but peripheral characters in previous stories , we get to delve into their world. Evan has a secret desire and his roommate Frankie is just the one to give it to him, discovering how much he also needs it. The friendship between these two shows through and provides a safe place for them both to let go of their insecurities. Hart and McCormack write a story that approaches a unique area of “play” with humor and dignity. The story made me care so much about each of these characters. I will miss Metropolis. Hopefully we will get to see these characters in other works by these authors.
Read more
One person found this helpful
Helpful
Report abuse

Rod B
5.0 out of 5 stars Sweet, Sexy and Fun!
Reviewed in the United States on April 28, 2018
Verified Purchase
Trying It is a great finale to the Metropolis series by these two fabulous authors! All the guys in the series are back and better than ever. In this final installment, we get Frankie & Evan’s love story. I love a great friends-to-lovers book, and Frankie and Evan have such a great connection.
What starts off as sweet friendship, develops into a sexy and fun love story. I really enjoyed the exploration of puppy play between the two men. The dynamics of their relationship give both men exactly what they need. They really are perfect together.
I’m definitely going to miss Metropolis, but eagerly look forward to what Ms. Hart and Mr. McCormack are going to come up with next. Bravo!!
Read more
Helpful
Report abuse

Cranky Reader
5.0 out of 5 stars Deftly done kink
Reviewed in the United States on February 10, 2019
Verified Purchase
Evan’s past as kind of an kicked puppy emotionally turns into puppy play that allows him to let go of accumulated negative emotional baggage in a way that works for him - and for his new roommate. Both explore this new kink together and find something more to love about each other. Handled with great understanding and, one panicked moment aside, no kink shaming. Very cute. Also sexy. The rest of the Metropolis gang makes themselves known too, as the former foes become friends.

Renee Anderson
5.0 out of 5 stars 5 Fabulous Series Conclusion Stars
Reviewed in the United States on April 29, 2018
Verified Purchase
Evan and Frankie are friends that are roommates. Frankie is nurturing and sweet. Evan is trying to find who he really is after being deserted by his parents and then a controlling ex. When Evan wants to try something new Frankie is all into help him through his journey.

Sweet and sexy friends to lovers romance. It is not 100% necessary to have read the other books in the series, but you definitely should. They are also wonderful.

I loved how the two explored the kink together and equally benefited from the experience. The guys mental issues were handled with sensitivity. Absolutely perfect ending to this series.
Read more
Helpful
Report abuse
See all reviews

Katie townsend
5.0 out of 5 stars Loved
Reviewed in the United Kingdom on April 29, 2018
Verified Purchase
Frankie and evan stole my heart from beginning to end of their journey

Sue bowdley
5.0 out of 5 stars Loved It x
Reviewed in the United Kingdom on August 15, 2018
Verified Purchase
I've loved this series and I think this one is my favourite...I love puppy play and the way Frankie and Evan started together was perfect.....They were just perfect together.....I'll enjoy re-reading this series and look forward to reading more books between these two authors x
Read more
Report abuse

Liash
5.0 out of 5 stars Can't help but love this series!!
Reviewed in Australia on January 3, 2019
Verified Purchase
I absolutely loved Evan and Frankie's story! Evan hasn't had it easy - especially after being manipulated and lied to by Peter, and after his rocky past with his parents not accepting him when he came out. His depression hits him hard at times, and he struggles with the rumours that surround him and his past. Frankie sees through all of that and becomes his best friend - being both a voice of reason, a listening ear and a shoulder for Evan. While others think there must be more going on, their relationship, while close, is purely platonic. That is, until Frankie stumbles across Evan's interest in puppy-play, and soon realises his own interest in it too. Together they explore the kink, and discover what it means to them both individually, and for their connection which becomes more than friendly. Their chemistry has always been off the charts, but Evan needed a friend more than anything so subconsciously Frankie never took things further. Now they can't deny what they feel for each other, and what results is off the charts hot!

Once again, these authors have delivered a beautifully written and edited story. These guys are just so real! Realistic situations and reactions, but what I love the most is that communication and trust is at the forefront of all their interactions.

As always, it's great seeing the characters from previous books in the series, and seeing their HEAs play out. I'm hoping there will be more in this series, but also loving where it is now, with our main characters all now partnered up and living their HEA.

Definitely a series I would recommend, and one I know I'll read again.
Read more
2 people found this helpful
Report abuse
See all reviews