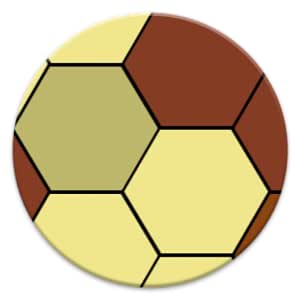 IsoKeys™ is an isomorphic musical keyboard, which can function as a wireless MIDI controller. All intervals, chords, and scales have identical patterns in IsoKeys, regardless of the key in which one plays. Similar in spirit to Musix for the iPad, IsoKeys provides a starter isomorphic keyboard to Android users.

Skilled pianists spend long hours working on such rudimentary elements. IsoKeys therefore promises to reduce the time required for you to move from beginner to expressive musician.

IsoKeys currently supports Sonome (Harmonic Table), Jammer (Wicki-Hayden), and Janko layouts, and it is polyphonic on devices that support multitouch.

With the addition of the paid "OSC/MIDI over WiFi" feature, IsoKeys can turn your Android device into an isomorphic MIDI controller.

IsoKeys delivers the power of isomorphic keyboards to all Android users. But some patience is needed in the beginning. There are a lot of buttons, including redundant buttons, in IsoKeys. Take your time and let the patterns emerge.

To improve the quality of our application, we reserve the right to track and report user activity inside IsoKeys. All data collected will be anonymous. We respect your privacy and will not collect any information to identify you personally.

Tuning Bell™ and IsoKeys™ are trademarks of Tuning Bell Studios.

3.3 out of 5 stars
3.3 out of 5
9 customer ratings
How does Amazon calculate star ratings?
Amazon calculates a product’s star ratings based on a machine learned model instead of a raw data average. The model takes into account factors including the age of a rating, whether the ratings are from verified purchasers, and factors that establish reviewer trustworthiness.
Top Reviews

David S
5.0 out of 5 stars Cool!
Reviewed in the United States on May 5, 2014
Verified Purchase
I downloaded this and my first impression was that it would be just a stupid noise maker. Then on further investigation of the key layout I realized that this is cool! The notes in the Sonome layout are laid out in 5ths left to right. Diagonally, left to right down is 3rds, and diagonally left to right and up is minor 3rds. The keys wind up grouped for easy access for chords.

There are a few other key layouts.
Read more
One person found this helpful
Helpful
Comment Report abuse

Jeff S. Smith
3.0 out of 5 stars Pretty cool app
Reviewed in the United States on November 21, 2014
Verified Purchase
Pretty cool app. Making real music with it may not be a realistic aim, but you can make some nice little tunes easily and intuitively.
Read more
Helpful
Comment Report abuse

WaterRabbit
5.0 out of 5 stars Great Idea and Works Great Too!
Reviewed in the United States on November 17, 2012
Verified Purchase
This is a new way of seeing the traditional keyboard. By using your imagination the whole world of linear playing goes out the window. Remember to set it up for your style, it has many options in preferences and can be used as a Midi controller but I have not tried that yet. The sound is very good and no latency, the action is awsome! This app is a Must Have for any musician, Thankz.
Read more
2 people found this helpful
Helpful
Comment Report abuse

Will
4.0 out of 5 stars Fun musical app
Reviewed in the United States on February 17, 2014
Verified Purchase
It only plays the paino but who cares..it's fun! Plus, I downloaded it for free so you know thats a bonus too.
Read more
Helpful
Comment Report abuse

Michael E. Califfsr
5.0 out of 5 stars Interesting concept
Reviewed in the United States on March 18, 2013
Verified Purchase
This method of keyboard layout was brought to my attention by a friend, takes some getting used to but is a novel concept.
Read more
Helpful
Comment Report abuse

george
5.0 out of 5 stars Fun app
Reviewed in the United States on August 20, 2013
Verified Purchase
This app is a fun thing to play with, and gets easier the more you use it. It's also free, so there is no risk buying it.
Read more
Helpful
Comment Report abuse

xtine
5.0 out of 5 stars works well and midi might be useful
Reviewed in the United States on December 29, 2013
Verified Purchase
This keyboard is interesting and works well on my new Kindle Fire. I am not sure why the last reviewer is complaining about being able to pay for additional features. What is sneaky about letting you try before you buy? That is what freemium means.
Read more
Helpful
Comment Report abuse
See all reviews from the United States
Amazon Appstore Return Policy