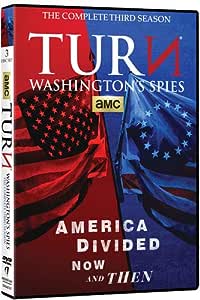 Season Three of TURN: Washington's Spies, the Revolutionary War spy thriller, builds towards one of the most notorious moments in American history the treasonous defection of Benedict Arnold (Owain Yeoman). Behind enemy lines on Long Island, Abe Woodhull (Jamie Bell) is a spy for the Patriots, reporting directly to George Washington (Ian Kahn). Embedded within the Continental Army, Arnold is seduced to become an informant for the British. As the consequences of their espionage ripple through the battlefield, the spy game becomes a heart-stopping race to see which mole will be unmasked first. In 1778, there is only one fate that awaits a captured spy -- the hangman's noose. The price for treason is blood, and not all of our heroes will survive.

4.8 out of 5 stars
4.8 out of 5
318 global ratings
How are ratings calculated?
To calculate the overall star rating and percentage breakdown by star, we don’t use a simple average. Instead, our system considers things like how recent a review is and if the reviewer bought the item on Amazon. It also analyzes reviews to verify trustworthiness.
Top reviews

Jean Richmond
5.0 out of 5 stars Love and treachery
Reviewed in the United States on November 21, 2016
Verified Purchase
Wow, just wow. This may be the best season yet. We've certainly grown to love (and hate) these characters and it is easy to forget they are based on real people. We've followed John Andre's rise through the British ranks (ably played by Mr Feild) and this season links him to one Benedict Arnold. I won't tell you what happens next but the climax was still a nail biting shocker. Abe (Jamie Bell) is slowly unraveling. As his off again flame Anna Strong notes he's played people against each other for the good of the patriot cause without thinking of the long term consequences. Those who banded together, which include his cousins, are rethinking their loyalty as their family/relationships decline. It's a brilliant study in character with a fairly good representation of the history of the time. And a touch poignant with the recent US election. I tried to watch this in parts but ended up binging and watched the entire series in one day. So good. Can't wait for the next season
Read more
10 people found this helpful
Helpful
Comment Report abuse

Lynette McClenaghan
5.0 out of 5 stars Brilliant Television
Reviewed in the United States on August 30, 2017
Verified Purchase
This season of Turn highlights most clearly that the War of Independence was a civil war. I know that some have criticised the show for not always being historically correct. Nevertheless, the fictional elements for the most part merge seamlessly with the historic. A few moments of melodrama and mawkishness are insignificant considering the power of the dramas that unfold. The climax to the season under the shadow of the gallows was outstanding television. It has become a complex and compelling interweaving of stories and raises questions of loyalty and responsibility. Continually fascinating and thought-provoking.
Read more
One person found this helpful
Helpful
Comment Report abuse

Kiki
5.0 out of 5 stars A Must See for those Interested in U.S. History
Reviewed in the United States on April 12, 2017
Verified Purchase
Super tell-all about the little taught or publicized story about the Revolutionary War spy ring created by a group of childhood friends as adults to aide General George Washington. Said to be the first American spy ring. A few deviations from the truth with certain relationships between characters, but it's excellent as both a tool for history as well as entertainment. Couldn't stop watching one episode after another!
Read more
3 people found this helpful
Helpful
Comment Report abuse

R. Nelson
4.0 out of 5 stars I love anything about the American Revolution
Reviewed in the United States on May 26, 2018
Verified Purchase
I love anything about the American Revolution. This series was well written. The cast was exceptional. The acting was award-winning caliber. The sets and locations were perfect. I didn’t give it 5 stars because they stuck totally unnecessary sex scenes in nearly every episode. I don’t want to see that. I fast forward past them, but it’s a nuisance. There are so many. I don’t know anyone that likes those scenes or sees their value to the story line.
Read more
One person found this helpful
Helpful
Comment Report abuse

alien alias
5.0 out of 5 stars Turn is revolutionary
Reviewed in the United States on November 12, 2016
Verified Purchase
I love this series and am very sorry to know that there will be only one more season, I am glad I have the DVDs to watch it over again.
Read more
8 people found this helpful
Helpful
Comment Report abuse

Red
5.0 out of 5 stars BEST SHOW ON TV
Reviewed in the United States on November 22, 2016
Verified Purchase
TURN Washington's Spies is without doubt the best show on TV. The acting, scripts, sets, costumes are all perfection. The show not only teaches the history of the Revolutionary War that is in the background of the drama, but it also exposes viewers to the mores, styles, culture, philosophical and scientific aspects of the era. TURN does not shy away from social issues like the treatment of women or slavery. It immerses fans in a world that was radically changing, and not just politically. Historical figures like George Washington and John Andre along with fictional character Edmund Hewlett are truly "children of the enlightenment" whose multi-faceted talents in art and science are a classic example of the Renaissance men of the era. Season 3 is also the most fast paced so far, and it has the most significant repercussions for characters who are held accountable for their personal decisions.
Read more
8 people found this helpful
Helpful
Comment Report abuse

max5520
1.0 out of 5 stars BEWARE !!!!
Reviewed in the United States on September 5, 2019
Verified Purchase
Series 1/ 2 / 3 are available on DVD and they are all 5 STARS. But... just be aware that there is a Season 4. The Season 4 is not compatible on players in the US & the language is German. At present the only way to see the CONCLUSION to the series (Season 4) is to stream it through Amazon. Just FYI; a heads-up so you know the full story. Noticed that many others have made comments regarding the inability to get a DVD Season 4 of Turn to fully complete the series. Currently Amazon lists Season 1 / 2 / 3 as the "Complete Collection" (and can purchase them together) but that isn't the real situation.
Read more
Helpful
Comment Report abuse
See all reviews

Anthony Cartwright
5.0 out of 5 stars Five Stars
Reviewed in the United Kingdom on August 23, 2017
Verified Purchase
Good story based on facts
Read more
One person found this helpful
Report abuse

Yoda
5.0 out of 5 stars Must watch
Reviewed in the United Kingdom on July 10, 2017
Verified Purchase
Improves every series. Definitely worth watching.
Read more
2 people found this helpful
Report abuse

Page 1 of 1 Start overPage 1 of 1
This shopping feature will continue to load items when the Enter key is pressed. In order to navigate out of this carousel please use your heading shortcut key to navigate to the next or previous heading.
Back
Next
Pages with related products. See and discover other items: 2016 dvds