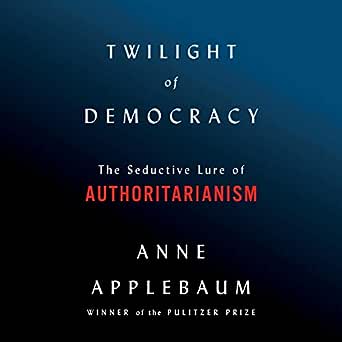 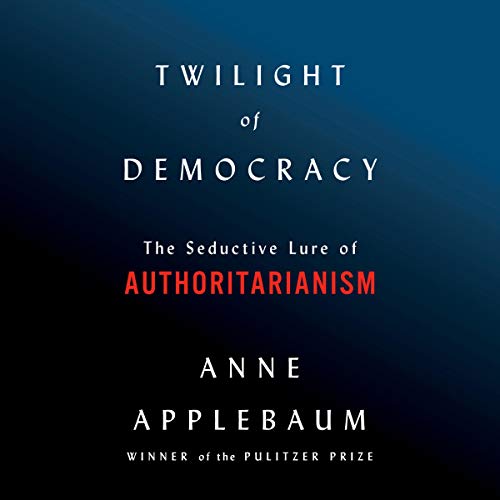 Twilight of Democracy: The Seductive Lure of Authoritarianism

4.6 out of 5 stars
4.6 out of 5
983 global ratings
How are ratings calculated?
To calculate the overall star rating and percentage breakdown by star, we don’t use a simple average. Instead, our system considers things like how recent a review is and if the reviewer bought the item on Amazon. It also analyzes reviews to verify trustworthiness.
Top reviews

Aldona Balodis
5.0 out of 5 stars RE: Mark Bennett's review " A Reactionary defense..."
Reviewed in the United States on July 22, 2020
Verified Purchase
ERRATA: I have been advised by MARK BENNETT that he is NOT the Trump appointed Judge to the Court of Appeals of the Ninth Circuit, Mark J. Bennett. For my mistake, I am deeply sorry.

I was very impressed by Mr. Bennett's very lengthy dissection of Ms. Applebaum's book-essay.. I am an ordinary citizen who is worried about Trump's dismantling of our US Department of Justice, State Department, etc., etc.. I am not as "brilliant" as Mr. Bennett that is for sure. But I don't think I am stupid. I have a a degree in physics and worked as a licensed nuclear engineer during my career . I admire Anne Applebaum and have read most of her books which deal with the atrocities of Stalin's and Hitler's regimes. I have read this her latest book. My Uncle Antons was shot by the Nazis in Latvia accused by a neighbor of being a Communist. My grandparents were forcibly sent to the Third Reich labor camps. My wife's Lithuanian family, most of them, were sent to Siberia by the Communists accused of being capitalist/kulaks. That history has sensitized me to anything and everything political that may lead our government to abuse and control our lives including illegal arrests, mass incarceration, secret executions and torture, suspension of free speech, control of the air waves, etc. Mr. Barr, Mr. Yoo and others are extremely adept at formulating arguments (not necessarily legal) to subvert the Constitution. In this spirit you have done so in your "critique" of Ms. Applebaum's book in an attempt to destroy it and her. I am so afraid of people like you who are very clever, calculating and support the current GOP trend to defend trump and the GOP at all costs. But at the same time I also believe that you are also afraid of people like Ms. Applebaum. Otherwise why on earth would you bother to write such a lengthy, twisted, almost "legal-brief" like argument opposing her brilliant essay! Is such loyalty to trump and America's oligarchs really worth it?

David P.
2.0 out of 5 stars Disappointing book. The author fails to see authoritarianism in the Republican Party before Trump.
Reviewed in the United States on July 27, 2020
Verified Purchase
One of the most valuable lessons I ever learned was back in the early 70’s. I wanted to understand why Russia was so undemocratic despite their constitution having a democratic framework. The answer it turns out was simple; everyone just agreed to corrupt the system. As it was explained to me, if someone brought in a petition to get on a ballot and wasn’t a member of the Communist Party, they would just toss the petition in the garbage. And so, it is that I learned the fragile nature of democracy. It isn’t the constitution, the institutions, or the laws, that maintains a democracy, it requires a constant vigilance by we the people to keep it a democracy.

This was around the same time as Watergate and I have always faulted Ford for pardoning Nixon so we couldn’t learn how he had attempted to corrupt democracy through his personal use of the FBI and his attempts to subvert the IRS to spy on his political enemies. And because this never came to light it was easy for people to accept that Obama had tried to subvert the IRS regarding Tea Party groups. They also didn’t understand why it was so unacceptable for W. Bush to fire 8 AGs for what appeared to be political reason. These aren’t things that are supposed to happen in a democracy.

Twilight of Democracy, by Anne Applebaum is an extension of a shorter magazine article on the subject. Perhaps because there just wasn’t enough new material to fill a book, even one of just 189 pages, I found the book very disappointing. The author spends a chapter each on Poland’s and Hungary’s slide away from democracy. But neither Poland or Hungary had a long history democracy. Perhaps it just wasn’t that hard for them to lose it.

The US however has a long history of democracy. And even if we haven’t actually lived up to those ideals, the vast majority of people pay lip service to them. So, how is the US doing? It is unfortunately, this chapter on the US that is most disappointing. She offers up nothing that one doesn’t get from a cursory reading of the news. Trump is a disaster. She throws in a few recent examples. But she does not begin to mine the wealth of examples out there. Perhaps, and I don’t feel good about pointing this out, but perhaps it is because Anne Applebaum does not want to see them.

Anne Applebaum admits to being a Republican but left the Party in 2008 following the nomination of the proto-Trump Sarah Palin. She doesn’t say what she saw in the Party in the W. Bush years. Certainly, it was those years that more than any other saw the Republican Party slip towards authoritarianism. The lies leading to the invasion of Iraq. The outing of a political opponent’s wife as a spy. The AG scandal, torture, the “with up or against us” slogan, the Patriot Act. And while I can’t fault Chief Justice Robert’s credentials, he certainly is no crony. We can find a lot to fault in the failed nomination of Harriet Miers, and the successful nomination of Alito. If my mind was a bit more agile how many more examples could I come up with off the top of my head. There are to be sure, there are several books on the subject.

As a matter of fact, John Dean, of Watergate fame, wrote a book Conservatives without Conscience, detailing some the authoritarian tendencies of the Republican Party. Somehow, Anne Applebaum doesn’t see these things. Authoritarianism and anti-democratic tendencies didn’t start with Trump.

Der Graf
5.0 out of 5 stars The book WORTH reading!
Reviewed in the United States on July 22, 2020
Verified Purchase
A very incisive view of Poland and "Polishness". Quite damning but deservedly so. As Appelbaum points out, there WAS a glimmer of hope. It faded, substituted with the customary and traditional version of the Polish chauvinism and bigotry, all presented under the banner of "Under the White Eagle" patriotism.
It IS a magnificent country, with magnificent culture and proud history, all consistently ruined by the backwardness and even sheer stupidity of the ultra-condervative elements within the Polish citizenry too often playing the principal role in Poland's politics. Still, the author of the solitary review of Appelbaum's book clearly misses what the "manor" signified and what it still signifies. Unsurprisingly, though: the review is written by an American and is based on the concepts of American conservatism. There is not much understanding of what Poland and Poles are about, of the maddening mixture of spirit, bravery, sentimentality, poetry, and the sheer pigheadedness that do often drove the country to near ruin and perdition. Erudite and wonderfully well written as the review is, but it sorely misses the mark. READ THE BLOODY BOOK then, discard what fancy scribes on the subject want you to think and believe, and form your own opinion - the book is worth the effort! Oh and by the way, I DO know about mannors, etc. Lived in them most of my life...
Read more
74 people found this helpful
Helpful
Comment Report abuse
See all reviews

Bonbon Hu
5.0 out of 5 stars Good descriptions of the causes.
Reviewed in Canada on July 29, 2020
Verified Purchase
For somebody who has no clue of world politics, this is refreshing. A good teaching on centralist, liberal left, conservative right, etc.
Read more
3 people found this helpful
Report abuse

Marc Pozzi
5.0 out of 5 stars Extremely interesting
Reviewed in Germany on July 29, 2020
Verified Purchase
The author displays two remarkable characteristics: an outstanding network of public personalities from all over the world and a sharp intuition for the human political and social behaviour. Building up from direct personal contacts, professional and private, Anne Applebaum describe the shift of political climate and alliances in what was once called the western world, from the fall of Berlin Wall to the coronavirus crisis. Brilliant!
Read more
One person found this helpful
Report abuse

Paul Wilson
5.0 out of 5 stars Clear, coherent, thoughtful, important
Reviewed in Canada on November 19, 2020
Verified Purchase
It’s a brilliant, if somewhat disturbing discussion of what’s been happening to democracy, especially in the time of Trump.
She is obviously a talented researcher and skilled writer.
One of the best books I’ve read on this topic (and I’ve read a lot lately).
PaulW
Read more
Report abuse

FM
5.0 out of 5 stars Well observed
Reviewed in Germany on October 7, 2020
Verified Purchase
Highly readeable, this is a well-observed piece of writing that offers insight into current political trends.
Read more
One person found this helpful
Report abuse
See all reviews