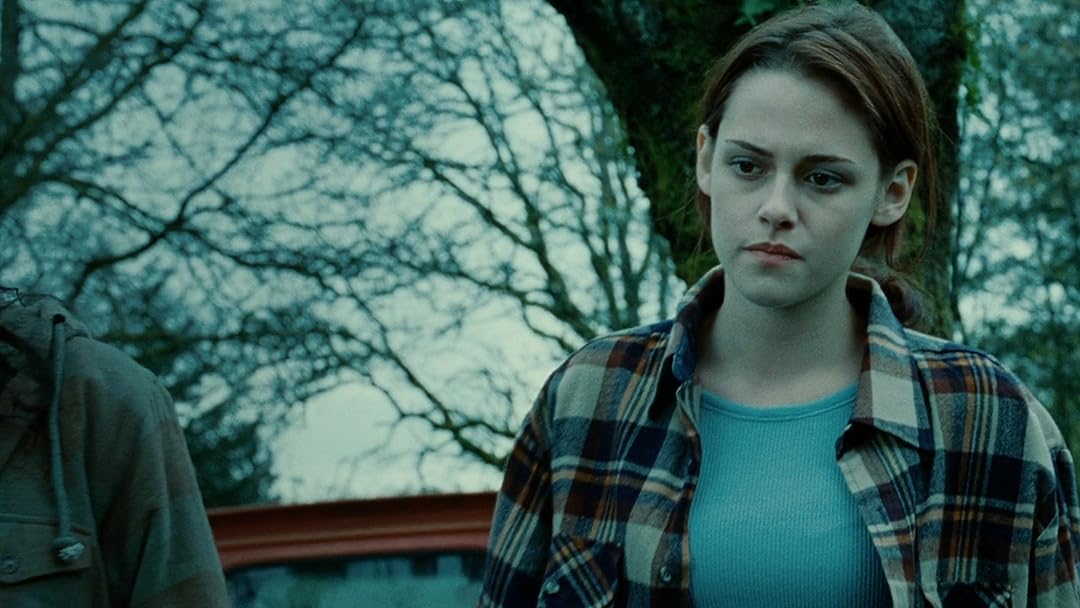 (32,618)
2 h 1 min2008X-RayPG-13
A high-school student is caught up in a romance with a vampire, whose family has renounced the drinking of blood. When you can live forever, what do you live for? Based on the first book of a series by Stephenie Meyer.

Rentals include 30 days to start watching this video and 48 hours to finish once started.
Add to
Watchlist

Save with with the Twilight movie collection on Prime Video shop now.

Evelyn M. JacksonReviewed in the United States on July 6, 2022
5.0 out of 5 stars
This Movie Actually Perpetuates Good Values...in backwards way...Good for most age groups over 10
Verified purchase
This film and book series confirm how the world should work or at least how it works best. It shows this in a creative fun fantastical way though...People with certain political agendas will not appreciate this fact.

For example, the structure of the hierarchies in these films are how things should work. Ed Cullen protects and takes care of Bella Swan. He seeks to protect her. He is CHIVALROUS!!!

( Yes, he is a little nutty about it...but he is an inexperienced vampire in love (and are not we all a bit nutty when we are young?) who has nothing to do at night...His sneaking in at night is pushing the envelope but if you read the books including Midnight Sun you see that he is obsessed about keeping her safe from other vampires and herself as she is accident and bad luck prone.

As in most things, it is the intention of one's heart that must be revealed to understand people's actions and only the Big Guy really knows this.
But in this case, we have Meyers to tell and explain this in the books better ).

These things bring on one of the first books and films to nail true romance between 2 people. There is sexual tension. You know these people are in love...no doubt. But beautifully and dramatically, Ed Cullen ABSTAINS from sex until marriage!!! It is a revolution!!! Who has heard of that....? Well, it was done all the time before 1960 as a practice and for 10,000 to 100, 000 years in human history before that. It must have worked because the world was kind of more orderly then. ...?

This Abstinance fact makes the sexual tension continue throughout the Saga. When there is a sex scene after they are married, it is tender yet passionate...yet fairly modest and touching as Both Bella and Edward are shy! It is soooooo tender and touching....How things in the bedroom should be....and most people miss out on because they believe the lies.

These 2 things and many other good things make this story unpopular to HOLLYWOOD. Of course, Hollywood does not want to promote anything that is actually good because most people there are a bit crazy.

I believe Chadwick was taken off because she was pushing back on the good stuff in this story. But that is just a suspicion.

I woukd also like to add that the main characters are very good kids.....good kids....the kind of kids parents dream to have be their children's friends....They have their problems but seem to make good decisions in the end.

It is a fantasy. I would not recommend marrying a vampire in real life though...;)

DLSKCReviewed in the United States on March 10, 2020
4.0 out of 5 stars
High 4+ rating
Verified purchase
I don't easily give 5 stars, so I didn't. This was a really good movie, though. I watched it for the first time February 2020! I watched after listening to the 1,000 years song covered by Boyce Avenue on youtube.com. I do calisthenics and stretching to youtube videos, and sometimes youtube selects videos for me that I haven't heard before.

I watched the last movie, Breaking Dawn II, years ago, but I didn't like it. It seemed boring, especially compared to the Vampire Diaries which I was watching occasionally at the time. So, I didn't watch the other Twilight movies. However, when I decided to start watching the series of movies at the beginning in February 2020, I really liked them. Everything made sense. In the future, movies like this should take 5 minutes out at the beginning to say "Previously, on Twilight....." and give a 'trailer' of what happened in the previous movies. I like this first movie best, although really I liked the New Moon part with the Volturi.

I think Kristin S. and Robert P. did a really good job in acting, especially given their ages at the time. All of Kristin S's (Bella's) lip-biting and overly done facial expressions was a bit annoying, but I read later that that's what Bella does in the books, so OK. I think she tones that down in future Twilight movies.

I thought that some of the dialogue was/is not very credible...but then after thinking about it again, I thought, "This is exactly what high schoolers would say." Example: Edward going up to Bella a few times and saying, "We shouldn't be friends" or "I'm sorry I'm rude but I think it's for the best." If he really thought they shouldn't be friends, he should have stayed away from her! :-) But that's exactly what high schoolers would do and say....because they really do want to be friends. They rush into relationships and are also overly dramatic about their 'love.' So, it's OK.

Of course, the Cullen kids look older than most high schoolers.

The one thing I really don't like about this Twilight movie, even though it fits with the plot really well, is when Bella just 'told' her dad she was taking off and driving south in the middle of the night as a 17 year old. ***SIGH!*** This is why high schoolers and less-educated parents all over the USA think parents have no control of kids. Movies are very influential on many people.

Until teenagers reach the age of 18 in most every state, they are MINORS. As such, they must be under the control and legal custody of an adult, who is/are usually their parent(s). A Chief of Police like Bella's dad would have said, "Young lady, if you step out of that door, I'm going to arrest you." Honestly, I think many cities have curfews for teenagers, too. But, it's a novel. I just wish the writers would sometimes inject realism into their stories, as least for legal reasons. I get tired of reading about real life scenarios where a 25 year old male soccer coach runs off with a 17 year old female student. If he's not her legal guardian, he could possibly be charged with kidnapping or some other such crime.

ANYWAY, good movie. I think it is so well reviewed because it's a love story between people who care more for their partner than themselves. It's heartening and unfortunately way too rare in real relationships.

Last, I think Kristin S. should grow her hair back out (and stop dying it yellow!) and do more movies with Robert P. Neither of them have had great success, comparatively, since this Twilight series. Maybe they should team up again.
5 people found this helpful

SandraReviewed in the United States on November 24, 2022
5.0 out of 5 stars
Team jacob
Verified purchase
Love the movie
2 people found this helpful

BethanyReviewed in the United States on November 6, 2022
5.0 out of 5 stars
&lt;3
Verified purchase
I could watch Twilight every day of the week, love this movie. Brings me back to high school!
One person found this helpful

Julie WeaverReviewed in the United States on November 1, 2022
5.0 out of 5 stars
Very unique movie.
Verified purchase
And we're family really enjoyed watching it and my granddaughter which is 15 watches it at least once a month.

Dr. DebReviewed in the United States on April 23, 2022
5.0 out of 5 stars
Forget all of the ridiculous negative psychobabble! Twilight is a beautiful movie and the music....
Verified purchase
I am a new born Twi-Hard. I recently saw and thoroughly enjoyed all of the Twilight Saga movies, even though I hadn't read any of the books. I think Catherine Hardwicke did a wonderful job directing Twilight, especially since she was given such a limited budget to work with (as many female directors are unfairly dealt). She tried to keep the movie as close to the book as possible. I couldn't believe that Summit wanted to have Bella on a jet ski, fleeing from the FBI! What?? I am really happy that Ms. Hardwicke put the kibosh on that. Yikes! It is unfortunate that some of the clarifying scenes were cut due to time constraints due to budget constraints. The casting and performances of a mainly young group of actors were perfect. Robert Pattinson, Kristen Stewart were perfectly casted for the lead rolls. Luckily, there have been YouTube videos with deleted scenes that aren't even in this extended edition.

I was so taken with this movie that I decided to check out some reviews online. Wow! Some of the negative reviews were really off the wall, especially when therapists were so worked up about Bella being weak, easily manipulated and in abusive relationships with Edward and Jacob. Are these therapists implying that younger people are so out of touch as to not be able to differentiate between what constitutes a healthy human to human relationship and complexities of a fictional vampire to human and shape-shifter to human relationship? The phrase "helicopter parents" comes to mind.

I would recommend reading Midnight Sun to better understand Edward Cullen's struggle and I think Robert Pattinson nailed it.

Twilight has grossed 407.1 M so far and it is having a spectacular rekindling of interest. I absolutely recommend watching it.
2 people found this helpful

Robyn JohnsonReviewed in the United States on October 2, 2022
5.0 out of 5 stars
Rewatching for the 100000th time
Verified purchase
I got tired of trying to figure out what streaming service this is on because I swear it moves every month. I finally decided to buy it. Is it a good movie? Well, that's debatable. I'm just happy I can finally watch it whenever I want. Even if it's not a good movie, I really like it.
One person found this helpful

Kuzma_kidReviewed in the United States on August 19, 2022
5.0 out of 5 stars
45-year old man LOVES this!!!
Verified purchase
As a 45 year-old guy, I am hardly the demographic for a film like this. Yet, here I am, professing my love for a teen vampire romance. How's that possible? I am asking myself that question. I can only guess that it's the story, the characters, and elements of vampire lore I didn't realize I would find so compelling. As strange as this sounds, I found the most nonrealistic part to be where Bella takes a can of mace to a vampire fight. That seemed a tad out of place given that she knew what she was in for. But sparkling vampires and flying up and down trees was completely believable, ya know? Ha, put aside what you've heard about this one and give it a fair chance. You'll be in for an entertaining night. Enjoy!
3 people found this helpful
See all reviews
Back to top
Get to Know Us
Make Money with Us
Amazon Payment Products
Let Us Help You
EnglishChoose a language for shopping. United StatesChoose a country/region for shopping.
© 1996-2022, Amazon.com, Inc. or its affiliates