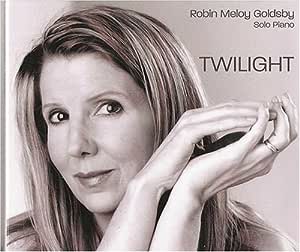 "Robin Meloy Goldsbys solo piano music is gentle and clear. Her compositions are woven with threads and colors that are delicate and confident, a rich musical tapestry stitiched together by a pianist with an exquisite touch . . . peaceful, inspirational, magical. Goldsbys music will take you on a voyage you will always remember."

TWILIGHT marks the ten-year anniversary of Goldsby's move to Europe. The CD is a quiet musical celebration of life, love, and the little miracles surrounding her.

The CD is accompanied by a sixteen-page two-language booklet, with the stories that inspired the compositions.

The gracefully-played piano music captivates the listener with its simple melodies and complex emotional themes. TWILIGHT is a lovely recording for a quiet evening at home.

Robin Meloy Goldsby composes and performs beautiful piano music. She performed for ten years as one of New York Citys leading hotel pianists. She lists among her credits the Grand Hyatt Hotel, The Plaza, The Pierre, The Waldorf Astoria, and the Sheraton Centre. She is best known for her solo piano performances at New Yorks Marriott Marquis Hotel where she played the 1985 grand opening and spent the next seven years captivating diverse audiences with her unique musical style.

Robin Meloy Goldsby grew up in Pittsburgh, Pennsylvania and attended Chatham College. She studied piano with Bill Chrystal and performed as a musician and actor in many Don Brockett productions. Robins father is Bob Rawsthorne, Pittsburgh drummer and percussionist for the Mister Rogers Neighborhood show.

While living in New York, Ms. Goldsby also served as the musical director of the critically acclaimed international tour of "Sesame Street Live with Luis and Gordon."

In 1994, the Evergreen Music label released Goldsbys lovely solo recording debut of standards and popular classics, "Somewhere in Time." This recording is currently available through Amazon.com.

Shortly after the release of "Somewhere in Time," Goldsby moved to Cologne, Germany, with her husband, world-class jazz bassist John Goldsby. During the next five years, she stayed at home with their two small children, studied the German language, and began composing fifteen new piano solos for "TWILIGHT,"a recording produced by Spielberg and scheduled for release in Spring 2004.

"TWILIGHT" contains songs inspired by Goldsbys journey to Europe ("One Womans Journey"), the birth of her daughter ("The Light in Julias Eyes"), of summers spent on an island("Nantucket Solitude") as well as dreams, hopes and love ("Following Your Light," When Stars Dance," "Miss You Most of All"). The winning team of Spielberg and Goldsby promises to make this newest realease an enduring acoustic piano classic.

Goldsby collaborates regularly with singer/guitarist Peter Fessler. Together they have written many of the songs heard on Fesslers latest recordings. "Blue Summer," climbed high in the European Jazz charts in 2002. "Landscape Tapestry," the newest Fessler/Meloy Goldsby collaboration was released in April 2003. Their third recording of original material is in post production in Berlin.

"Hobo und die Waldfeen" ("Hobo and the Forest Fairies"), Goldsbys musical radio play for children, was produced by the WDR,, Europes biggest radio/television station and was broadcast on Christmas day, 2003, to the delight of many young listeners.

Robin Meloy Goldsby currently resides outside of Cologne, Germany with her husband John and their two children Curtis and Julia. As a solo pianist, she performs exclusively at Schlosshotel Lerbach, a beautiful fairytale castle in the hills of Bergisch Gladbach, Germany. She plays there regularly on Friday and Saturday evenings from 19:00 to 21:00, and Sundays from 12:30 to 14:30.