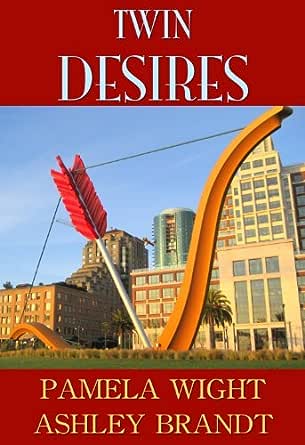 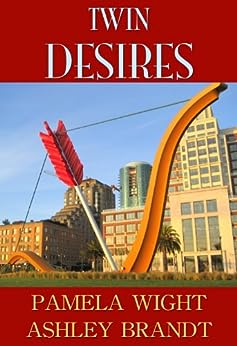 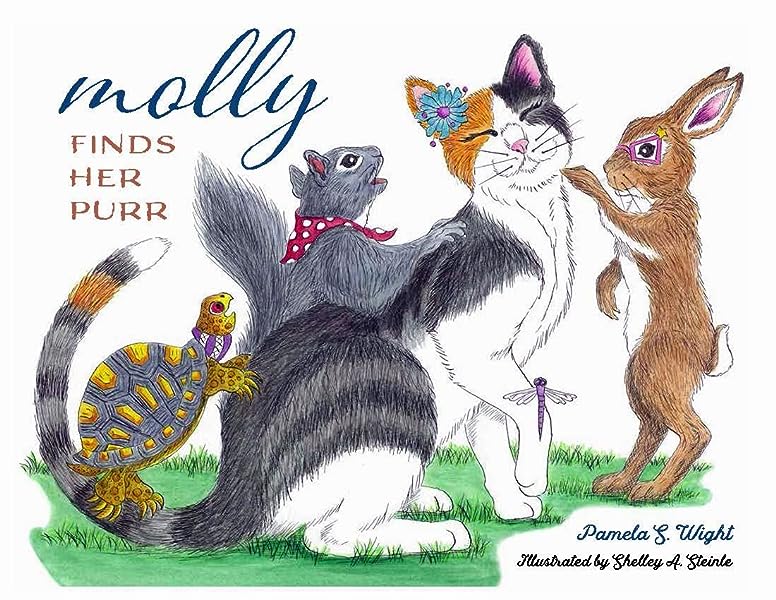 Pamela Wight is a successful author of romantic suspense. Her first novel, The Right Wrong Man, published in January, 2013, got rave reviews for taking readers "on an exciting adventure with lots of intrigue, unexpected plot twists, and romance." A year later, Wight published her second novel, Twin Desires, with Ashley Brandt, as an e-book. The second edition of this book was published as a softback in June, 2016. Pamela earned her Master's in English from Drew University, continued with postgraduate work at UC Berkeley in publishing, and teaches creative writing classes in Boston and San Francisco. She lives in the Boston area with her "right man" and hikes the New England trails while concocting her third novel. Wight travels frequently to the San Francisco Bay area for additional inspiration. She speaks to book clubs in both locations. Many readers enjoy her "weekly blog on daily living" called Roughwighting (www.roughtwighting.net). Ashley Brandt (co-author with Wight in TWIN DESIRES) is the nom de plume for a San Francisco Bay Area psychotherapist who, when not in session, enjoys the freedom of writing suspenseful fiction. Ashley and Pamela have been writing creatively together for over twenty years, when Ashley joined Pamela's creative writing class. She earned a PhD in Depth Psychology and an MBA from "the past, when I was in my twenties." Ashley lives in the beautiful hills of Marin County with her husband. --This text refers to the paperback edition.

4.6 out of 5 stars
4.6 out of 5
27 customer ratings
How does Amazon calculate star ratings?
Amazon calculates a product’s star ratings based on a machine learned model instead of a raw data average. The model takes into account factors including the age of a rating, whether the ratings are from verified purchasers, and factors that establish reviewer trustworthiness.
Top reviews

Robbie Cheadle
5.0 out of 5 stars A fast paced romantic thriller
Reviewed in the United States on March 28, 2019
Verified Purchase
This book was not at all what I expected. It is labelled a romantic suspense and, as I did not really know much about this particular genre, I was expecting a lot more romance and less suspense. I was entirely wrong. This book by Pamela Wight is fast paced and exciting from beginning to end. The romance does play a large role but it is woven into the thriller in a way that does not detract from the excitement and story at all.

Sandra Eastman has spent years overcoming her traumatic past. She has built up a safe and predictable life for herself which contains no surprises. She has a good job in a top investment firm where she is achieving and is set to climb the corporate ladder and she has a lovely place to live with a good and friendly neighbour.

Then life starts of happen and Sandra, who dislikes change and the unexpected, is drawn into a frightening situation involving her attractive but reclusive boss, Blake Sinclair, and his vicious and mentally unstable identical twin brother, Alex. Sandra unwittingly becomes a target of Alex and she must learn to trust Blake in order to survive. She will also have to face her worse fears in order to save the man she has grown to love.

I enjoyed the character of Blake Sinclair. Despite growing up dealing with the endless problems posed by his brother's mental illness and his resultant sense of responsibility and guilt, combined with his family's enormous wealth, Blake is a decent man. A bit arrogant and used to commanding other people, but he has a good heart and wants the best for his employees and his company. He does come across as being a bit demanding and impatient and these characteristics do result in the explosive situation with his brother following a different path than what it might have if Blake had a different nature.

I did like Sandra although from time to time she did irritate me a bit with her spinelessness. She grew nicely as a character and was able to deal with greater and greater challenges to her mental stability and physical health as the story unfolded. I enjoyed her a lot more at the end than in the beginning.

All in an excellent read that will keep you entertained throughout.

New York Army Mom
5.0 out of 5 stars A new look at an old Genre.
Reviewed in the United States on August 12, 2016
Verified Purchase
A 5-Star Review of Twin Desires, by Pamela Wight and Ashley Brandt.

As I have said before, I don’t usually read romance novels because there doesn’t seem to be anything new and exciting. REFRESH! Adding the suspense of the twin brothers brought a whole new light to the subject. There was a whole lot of suspense, and just enough romance to keep the reader interested in both. I found myself reading well into the night when I really should have been sleeping.

Being a twin myself, I was able to relate to the feelings of the twin brothers. And it is true my friends, that a twin can feel the pain of their sibling. It has happened to me on more than one occasion. Of course, in this story we have a good twin and an evil twin, constantly leaving the reader wondering what the evil twin would do next.

The authors do a great job of building not only the main characters but the secondary characters as well. As an avid reader, I enjoy getting to know each of the characters, not just the main ones, So I especially enjoyed the character development from the beginning right through til the end. I am definitely looking for more from these authors in the future and I highly recommend Twin Desires.
Read more
One person found this helpful
Helpful
Comment Report abuse

Jill
5.0 out of 5 stars Perfect combination of romance and suspense
Reviewed in the United States on April 4, 2019
Verified Purchase
As a follower of Wright’s blog, I’m familiar with her brilliant writing ability and unique style. I hadn't read any work by Brandt, but the two writing together certainly created an exciting page-turner in Twin Desires. I’m always impressed by novels that are co-written and curious about their process. The authors did a wonderful job developing both the main characters as well as the secondary. As a fan of both romance and suspense, this book was the perfect combination.
Read more
Helpful
Comment Report abuse

D. W. Peach
4.0 out of 5 stars Plenty of Romance and a Thrilling Plot
Reviewed in the United States on August 5, 2016
Verified Purchase
Twin Desires accomplished it's twin goals with plenty of romance and a thrilling plot. Sandra Eastman is making a comfortable life for herself when corporate CEO Blake Sinclair takes an interest. Unfortunately, his attentions coincide with the escape from prison of Blake's psychotic twin brother. Alex has one goal - to murder his brother and flee with his fortune. Sandra is a pawn in a deadly plot between a brother who loves her and his twin who wants to kill her. Wright has developed distinctive characters with a lot of personality and fun dialog. Frequent point of view shifts took some getting used to, but otherwise, Wright's writing is on the mark. A fast-paced and suspenseful read. Lovers of romantic thrillers will have a great time with this one.
Read more
Helpful
Comment Report abuse

Avid Reader
5.0 out of 5 stars Will the good twin survive the murderous desires of his psychopathic brother: page-turner!
Reviewed in the United States on July 26, 2016
Verified Purchase
Another page-turner by Pamela Wight!!! She has a knack for creating fleshed-out characters the reader develops a true affection for, nice people with vulnerabilities that not-so-nice people exploit. While, this definitely falls into the category of romance, it is much more than that. It is also a murder mystery. The characters we most care for are in real peril, and the action never stops.I lost myself in an engaging story and sighed when I flipped the final page.Read it!
Read more
2 people found this helpful
Helpful
Comment Report abuse
See all reviews from the United States

HarvestingHecate
5.0 out of 5 stars An exciting, romantic thriller
Reviewed in the United Kingdom on January 15, 2019
Verified Purchase
This is an exciting, romantic thriller that will keep you on the edge of your seat. Sandra Eastman is a strong, independent woman with a past that means she holds others at arm's length. Just as she's about to achieve a promotion at work, she unwittingly delivers a bomb to her boss, Blake Sinclair's office and is drawn into a dangerous game between Blake and his twin brother Alex. Sandra not only faces suspicion from the police but must fight to save her life. This book moves at break-neck speed. It twists and turns, creating a real sense of tension and fear for characters you come quickly to love. But there is also romance here to balance the tension and I enjoyed seeing this develop. It's never certain how the book will end, so it will keep you guessing until the satisfying conclusion.
Read more
Helpful
Sending feedback...
Thank you for your feedback.
Sorry, we failed to record your vote. Please try again
Report abuse

RoyMcC
4.0 out of 5 stars Formulaic but not predictable
Reviewed in the United Kingdom on January 30, 2014
Verified Purchase
Formulaic need not mean predictable. Pamela Wight is an excellent writer and her second book – this time with Ashley Brandt – combines familiar thriller elements with some insightful work that gives depth to her main female character Sandra. Without the back story Sandra would appear too straight, vapid even, to sympathise with but the reader cheers her on to the end.
I liked the prologue which, without further ado, introduces the hero and the arch-villain. And they are identical twins, which of course adds to the intrigue later. Blake is rich, handsome and successful. Alex is a psychopath soon to be banged up in a high-security unit for life – unless he escapes that is!
Sure enough, Blake is tired of women chasing him for his money and status. He starts to fall for the shy, intelligent but withdrawn Sandra who works in the middle management of his organisation. But soon enough Alex appears on the scene intent on securing the family millions for himself, with violence and a slow death for his victims an added bonus.
Sandra, having witnessed her own mother’s violent death, experiences heightened terror levels as she finds herself at Alex’s mercy. Wight does a good job of portraying her total dread, but also the way her dead mother’s voice helps her to survive and win.
All ends well as of course it should, but it was a close shave.
And a very well-written sex scene I must say. It takes skill not to repeat a description that one has read a thousand times, and yet no one wants hard porn with their cocoa and biscuit. Nicely done.
One for the ladies but men will like it too.
Read more
Helpful
Sending feedback...
Thank you for your feedback.
Sorry, we failed to record your vote. Please try again
Report abuse