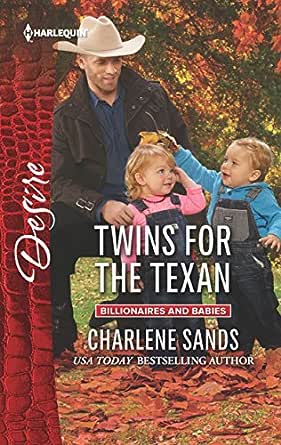 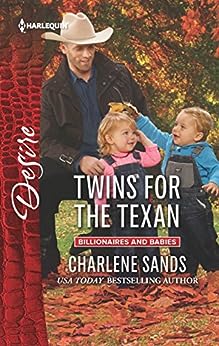 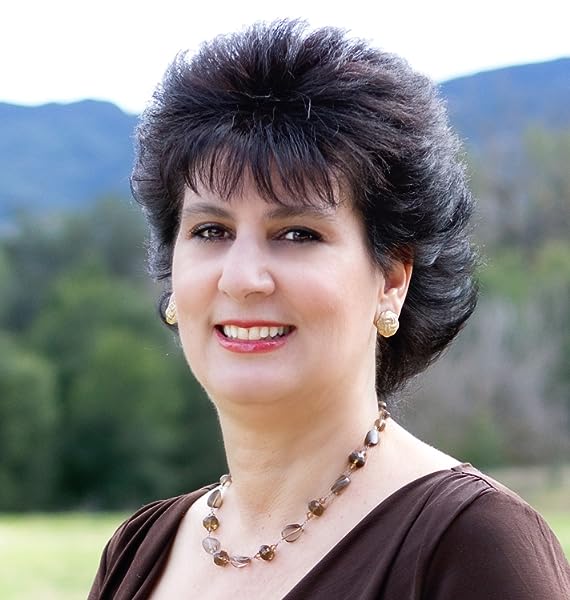 Twins for the Texan (Billionaires and Babies Book 2443) Kindle Edition

The explosive attraction is just the beginning of an unexpected journey full of love, parenthood and second chances.Expressive characters bring authenticity to the emotional and sometimes chaotic aspects of falling in love while raising small children. This Billionaires and Babies romance is sizzling!  ....Romantic Times Book Reviews Magazine  --This text refers to an alternate kindle_edition edition.

paula legate
4.0 out of 5 stars Sweet story
Reviewed in the United States on October 22, 2016
Verified Purchase
Wyatt had lost his wife. He was still grieving her . He had two adorable twins. Brett, and Brianna kept him busy. I really loved his twins throughout this story. His friend, and housekeeper knew he needed to go out. They talked him into going to a friend's wedding. On the way there, he stopped to help out Brooke who had ran out of gas. Come to find out they were both going to the same wedding. What are the odds? Brooke had a famous brother. Guys used her often to get close to her brother. For just one night, she just wanted to be Brooke. So when she met Wyatt, she gave him a false last name. The two drank, danced, and really enjoyed the night. That night Brooke got pregnant. The pregnancy was hidden from Wyatt throughout most of the story. She knew he was still grieving his wife. It was sweet to see him slowly fall in love with Brooke, and let go of his wife throughout the pages of the book. This was a sweet story.
I really liked Brooke. She is great with the twins. She sings with them, and enjoys playing with them. Wyatt's mother is coming for a visit. His mother was set on moving in to help. Wyatt does not want his mother moving in as much as he loved her. Brooke offered to pose as his nanny while the mother is there. That way the mother would know she was not needed. Brooke slowly won over his mother.

Kindle Customer
4.0 out of 5 stars Something missing
Reviewed in the United States on April 2, 2017
Verified Purchase
The story was very good except it needed an epilogue to find out what happened with Genevieve and James. Would have given it 5 stars with an epilogue.
Read more
Helpful
Comment Report abuse

PeleGirl
4.0 out of 5 stars Twins for the Texan by Charlene Sands
Reviewed in the United States on May 3, 2016
It all started out as a one night stand. Brooke McKay had run out of gas on the way to her friend's wedding and Wyatt Brandt found her on the side of the road. He was also headed to the same wedding and offered to give Brooke a ride. They got to know each other during the event and afterwards spent the night together in the hotel. The next morning Wyatt left before Brooke woke up. She wasn’t prepared for that.

Wyatt is still mourning the loss of his wife and the day of the wedding would have been her birthday. So it was especially hard on Wyatt. But thanks to Brooke, he was actually able to enjoy himself. He would forever be grateful to Brooke for temporarily taking his mind off Madelyn. But the next morning he had to return to his ranch and his eighteen month old twins.

The result of the one night stand wasn't anything either of them had expected. Brooke ended up pregnant? When Brooke and Wyatt start seeing each other again, she still can't find the words to tell him. Brooke soon finds herself pretending to be the nanny when Wyatt's mother comes to visit to keep her from wanting to move in him to care for the kids. How long will Brooke be able to keep her secret? And how will Wyatt react when he finds out he fathered another child when he thought his two children were all the family he would need?

This book was well planned out and had a lot of depth and emotion to it. It was pleasure to read.
Read more
3 people found this helpful
Helpful
Comment Report abuse

Susan Frank
4.0 out of 5 stars Good book
Reviewed in the United States on June 2, 2016
Good book. On the way to a wedding, Brooke gets lost and runs out of gas. Fortunately she is rescued by Wyatt, who is on the way to the same wedding. Brooke, sister of movie star Dylan McKay (One Secret Night, One Secret Baby) is tired of being used by people who want to get close to her brother, so she doesn't tell Wyatt her real name. Instead, she enjoys an evening with a man who has no ulterior motives.

Wyatt lost his wife a few months earlier and has been mired in grief ever since. The only thing keeping him going is his twin children. His best friend encouraged him to go to the wedding and make a start at beginning to live again. Rescuing Brooke, who has no idea of what he's going through, gives him a welcome respite from his grief.

Brooke and Wyatt connect almost as soon as they meet. There is definitely chemistry between them and as the evening goes on the heat continues to build. When the wedding is over, it flares into a desire that neither can resist. But in the morning, Wyatt is gone, and Brooke feels used again. Six weeks later she discovers she's pregnant and knows she has to tell him.

I liked Brooke a lot. She is fun, great with kids, and an all around nice person. She hasn't had good luck with men, which has left her wary. I liked the fact that she wasn't going to keep the news to herself, but she is understandably nervous about telling him, especially when she finds out he already has two kids. When she gets trapped on his ranch because of the weather, I really liked the way that she jumped in to help Wyatt with the twins.

I also liked Wyatt. He is hurting, but being around his kids makes it a little better. I loved seeing how much he loved them. They have become everything to him and he doesn't see that changing at any time in the future. I liked the way that he owned up to his mistake in leaving the way he did the morning after the wedding.

I really enjoyed seeing the development of their relationship. Brooke had come to tell him about the baby, but chickened out when he was talking about his two being enough for him. Trapped together on the ranch and working together to take care of the twins, the attraction between them is still there and just as strong, but both try to resist it. Brooke knows there's no future in it and doesn't want to get her heart broken again. When Wyatt gets into a bind and needs a nanny for the kids, Brooke offers to fill in until he can find one for real. But all that togetherness has her falling hard for him. Wyatt isn't sure what he's feeling for Brooke, but it has him really confused. When her nanny time is up she leaves, still unable to tell him her secret. Meanwhile, Wyatt finally starts to realize the truth of his own feelings, but isn't sure if it's too late for him. I loved his big moment at the end, especially the "help" he had.

I also liked seeing Dylan and Emma again. Their love is still going strong, of course. I loved seeing their support of Brooke. Dylan's overprotectiveness still tends to irritate her, but Emma does a good job of keeping him under control. I liked his conversation with Wyatt at the end.
Read more
One person found this helpful
Helpful
Comment Report abuse
See all reviews