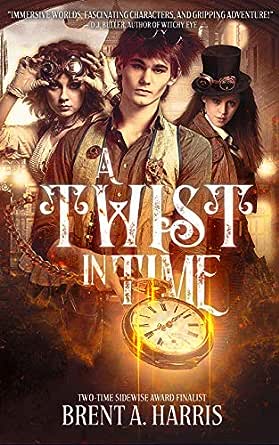 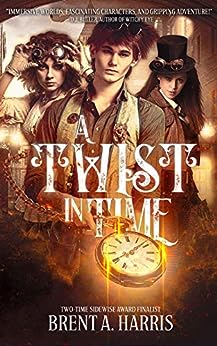 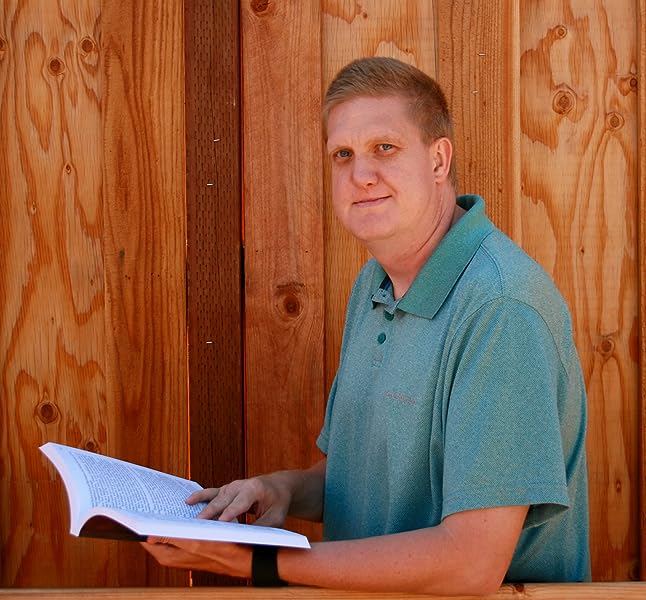 A Twist in Time Kindle Edition

"Immersive worlds, fascinating characters, and gripping adventure!" --DJ Butler, author of Witchy Eye.
"A thoroughly enjoyable romp through a steam-punk Dickensian London, with more than enough twists!" --Tom Jolly, author of Ring Wave.
"A must read for anyone who is a fan of Oliver Twist. This new take on Dickens will make your head spin." -- Richard Dent, author of Myopia, Dynamite Comics.
"Fast-paced and filled with charming characters." --John Coyne, author of Hobgoblin.

4.5 out of 5 stars
4.5 out of 5
10 customer ratings
How does Amazon calculate star ratings?
Amazon calculates a product’s star ratings based on a machine learned model instead of a raw data average. The model takes into account factors including the age of a rating, whether the ratings are from verified purchasers, and factors that establish reviewer trustworthiness.
Top reviews

Therese Moore
4.0 out of 5 stars Dickens with a Splash of Time Travel and a Pinch of Steampunk
Reviewed in the United States on May 14, 2020
Verified Purchase
Imagine Oliver Twist ten years after the events of the novel by Charles Dickens. Now add a splash of time travel and a pinch of steampunk. The result is A Twist in Time by Brent A. Harris.
It is a fast-paced adventure through the streets of Victorian London with some familiar characters and some new ones, just to keep it interesting. It follows Oliver as he tries to find the answer to some puzzling questions – Why are orphans disappearing? Is the Artful Dodger, friend or foe? Can he save them or London?
Overall, a satisfying read. I was pulled into the story and found myself breathless as Oliver dashes from one end of London to the other.
In the reading of it, I found the use of modern idioms a bit off-putting but the story was so compelling I soon forgot they didn’t fit the time period and just enjoyed the ride.

Bklovingangel82
5.0 out of 5 stars A steampunk tale for the ages!
Reviewed in the United States on May 15, 2020
Verified Purchase
I’ve gadgets and gizmos a plenty... I’ve whozits and what’s it’s galore....

More steampunk from this amazing author that is! This story really got my tears going, it’s packed with imagination and fun.

Bonnie Milani
4.0 out of 5 stars Not your average Dickens
Reviewed in the United States on May 21, 2020
Verified Purchase
A Twist in Time twists more than just time. It twists the very fabric of Dickens' classic tale. All the Twist characters are there, but in a whole new and very different light. Add in a dusting of steampunk and you've got a completely original take on Oliver Twist's beloved tale.
Read more
Helpful
Comment Report abuse

Geoff Habiger
5.0 out of 5 stars Amazing Steampunk Adventure
Reviewed in the United States on May 9, 2020
It is a rare thing to come across a book that grabs your attention so fully that you want to stop everything else so you can finish the story. A Twist in Time, the new novel from Brent A. Harris, is one such book. Enter one Oliver Twist, a young orphan taken in by the friendly, helpful Artful Dodger and taught the ways of the street as a pick pocket. Oh, you think you’ve heard this story before? If you took a high school English class you probably did, but this is not the Oliver Twist we know from Dickens. This is a London that has the gleam of punk added onto the burgeoning age of steam. It is on these altered Victorian streets that the young Oliver ply’s his trade as a pick pocket, but the pocket watch Oliver just stole will change his life. Jump forward ten years and Oliver has become, not quite a gentleman, but lives a comfortable life and has some modicum of fame from Dickens novel. (Yes, some fourth wall busting here, and I love it.) He’s trying to help others like himself, the young orphans of the city, although poverty and indifference make this a daunting task. But orphans in the city have gone missing, and when Oliver makes a visit to the old Foundling Workhouse where he’d grown up, one of the young orphans that Oliver has tried to save is taken. Oliver gives chase and soon finds himself out of his depth, sliding toward a future he has little control over. As Oliver continues to dig and pry, he uncovers a fiendish plot to reshape London. Oliver might be able to stop this plot and save the city if he can embrace his past and who he really is.

There are so many things I love about this book. A steampunk adventure that involves some of literature’s best known characters AND involves time travel – sign me up. But that’s not the main reason I love A Twist in Time (it’s a good reason, but not the only one). Brent Harris has a wonderful way with words, making them dance and sing to bring the story to life. For example: “In the evening, gaslights mourn, there isn’t a dry spot on the walks to be found to sleep on; dampness clings to you like a cloak, ice and snow paralyze the city in place.” Or: “The two made for an interesting sight, two desperate street urchins showing the truth of Victorian life.” This descriptive narrative is intermixed with Victorian slang and a sprinkling of humor in a lively prose.

Harris has also created characters we want to care about. He has taken a character you thought you knew, Oliver Twist, and shown us a young man who’s gliding through life, trying to do the right thing, but unsure of who he really is. Oliver is torn between the many roles and personas he was – poor orphan boy, street urchin – and the person he has become, and who he thinks he needs to be. Oliver is surrounded by people who constantly remind him of these different personas. Edward, a young orphan that Oliver is trying to protect, reminds Oliver of his past life, as does the Artful Dodger, and each reflects the different people Oliver had been. Mr. Brownlow, Oliver’s benefactor and mentor, ties Oliver to the ease and comfort provided by his fame and wealth. As the story progresses, we see Oliver struggle, trying to come to terms of who he is: orphan, urchin, or gentleman. The other characters are just as developed. Nell is a rock for Oliver, keeping him grounded and on track, and serving as mentor and trainer. The Artful Dodger, Jill Dawkins, is a free spirit and a force of chaos, constantly reminding Oliver where he came from and how disappointing his life has become. Each seems to tug and pull Oliver, both adding to his struggle for identity and helping him to resolve who he must become to save the city.

Great characters are only part of a good formula, you also need a good story. And again, Harris has delivered. A Twist in Time’s plot jumps and weaves as gracefully as the Artful Dodger slips away from trouble. The action and pace move at a cinematic clip, and new revelations and changes to the plot are peppered throughout to keep you turning the page. The final twist in the story might be anticipated by a few sharp readers, but it ties the entire story together.

In A Twist in Time Brent Harris has delivered a masterpiece of steampunk action-adventure fused with Victorian science fiction. He’s created an alternative literary history for characters we thought we knew and who will grab our attention just as much as the originals do. This is a story that Charles Dickens himself would enjoy.
Read more
Helpful
Comment Report abuse

Maggie Lynn Heron-Heidel
4.0 out of 5 stars A journey into Victorian England with a new fresh ‘Twist’.
Reviewed in the United States on June 4, 2020
A journey into Victorian England with a new fresh ‘Twist’.
Oliver Twist never looked so good. As far as I know, before this, he’s never been a vigilante either.
I’ll be very honest and say at the beginning of this novel, I wasn’t sure if I was going to enjoy the story. But by the end, I was won over. Having never been a super fan of steampunk, I found this book refreshing and a delightful change from the usual offerings of the genre. Oliver turns out to be a worthy hero for the story, protecting the orphans of the city and rising to the challenge.
While there were a few questions left over at the end of the novel, they lead on into the next book in the series and do not lead to a cliffhanger. All in all, it leaves you wishing to read the next in the series. Though the book is technically YA, the plot arc is by no means juvenile. It is perfect for adults and teens alike.
Well done, Mr. Harris.

I was provided and ARC advance copy in exchange for an honest review.
Read more
Helpful
Comment Report abuse

C.L. Cannon
4.0 out of 5 stars A smart new steampunk take on Oliver Twist!
Reviewed in the United States on May 21, 2020
A Twist in Time is the first book by Brent A. Harris that I've had the pleasure to read, but I guarantee it won't be the last! The premise of a time-traveling Dickens retelling is already intriguing, but I was so glad to find the characters were likable, the gadgets were clever, and the plot never slowed! The dialogue exchanges were witty, though there were a few modern word usages that kind of threw me, but not enough to take away from the wonderfully crafted story.
I look forward to reading more by this author!
Read more
Helpful
Comment Report abuse
See all reviews from the United States