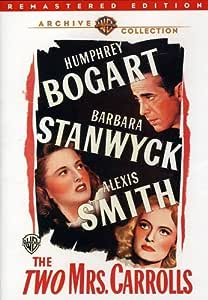 Matrimony means different things to different people. For temperamental artist Geoffrey Carroll, it means he's in his element. And out of his mind. In their only screen pairing, two of film's all-time greats star in a psychological thriller rife with pelting rain and pealing bells, blackmail and murder, calculated dread and an unnerving finale. Humphrey Bogart portrays Geoffrey, who's making a habit of poisoning one wife and marrying another when the former no longer inspires his canvases. Barbara Stanwyck plays his current wife Sally, who puts two and two together and comes up with six - as in six feet under, the place she'll be if she continues to accept the glass of milk Geoffrey regularly offers as a nightcap. Alexis Smith also stars as a predatory neighbor who becomes the object of Geoffrey's thirst for feminine variety. Drink up, thriller fans!

4.6 out of 5 stars
4.6 out of 5
325 global ratings
How are ratings calculated?
To calculate the overall star rating and percentage breakdown by star, we don’t use a simple average. Instead, our system considers things like how recent a review is and if the reviewer bought the item on Amazon. It also analyzes reviews to verify trustworthiness.
Top reviews

Lambie's MOM
5.0 out of 5 stars Barbara stanwyck Helpless and Humphrey - Psychopaathic
Reviewed in the United States on June 9, 2020
Verified Purchase
WOW!! This is a bone chilling old movie. Humphrey, could really dish up PSYchopathic! Incredible acting for him. He seems so gentle, sweet and reserved in the beginning, but he becomes more and more controlling as time goes on. HE is a SERIAL KILLER! He likes blondes, too. HIs young daughter, "Bea", also a blonde. (She also starred in several old Sherlock Holmes movies) cute child! HUmphrey, is a tortured painter or is he just an ordinary old Serial Killer? Great set design. Edith Head - gowns!! Woo Hoo! Both actors are of course, wonderful. Movie is very, very unnerving, and in Black & white, its really eerie. Lots of heavy rain, wind, beautiful costumes, lots of plaids, just a great old film. Worth watching!
Read more
2 people found this helpful
Helpful
Comment Report abuse

Lynne Carter
3.0 out of 5 stars Worth watching once, but no more than that!
Reviewed in the United States on August 30, 2020
Verified Purchase
This movie should’ve been titled, “The Two Humphrey Bogart’s”! HD is one of my all time favorite actors. Having seen all his major films, I can honestly say that this one does not measure up to Bogie’s stellar level of talent (hence the comment about the title). I found this film to be a disappointing viewing experience right from the beginning. Bogie’s performance was so unfamiliar that I kept wondering, “ Who is this guy?” If not for Barbara Stanwyck’s portrayal of one of the Mrs. Carroll’s, I can honestly say I would have stopped the movie halfway through for lack of interest. Having said all that, I still consider any Humphrey Bogart film worth watching at least once. Sadly, that’s exactly how many times I will see this one.
Read more
Helpful
Comment Report abuse

Pintorini
4.0 out of 5 stars Lackluster Women's Noir, but the Stars Make it Worthwhile
Reviewed in the United States on August 18, 2005
Verified Purchase
Humphrey Bogart and Barbara Stanwyck play interestingly against type as psychologically troubled artist Gerry Carroll and his fragile second wife, Sally. The problem isn't the acting or (in my opinion) the casting, but the clunky script. In the opening scene, Sally accidentally learns that new flame Gerry is married when (*clears throat for comic effect*) a letter to "Mrs. Carroll" falls out of his pocket. Swearing to never see Gerry again, Sally runs off into the rain, only to turn up married to Gerry three scenes later, after wife number one is dead. From there, the turns of plot become ever more convenient and clichéd, and yet somehow less logical at the same time. The script both swills in extraneous information and leaves too much unexplained, and the film overall is like a clothesline, with the plot points hung on awkwardly at predictable intervals.

But if there were ever two stars that could save bad material, it was Bogart and Stanwyck. Bogie made the choppy, incoherent character Gerry come out to more than the sum of his parts. And Stany, rest her soul, did her best in everything, from Preston Sturges literary tour de force *The Lady Eve* to the string of nickel westerns she did in the '50s. This pairing deserved a better vehicle, but it's fun to watch even so.

J.T.M.
1.0 out of 5 stars Possibly the worst film Bogart ever made
Reviewed in the United States on November 11, 2019
Verified Purchase
For all the top rated talent creating this film, —stars, studio, director, etc., the writing is totally phony, and the performances are dreadful. You can practically hear the director yell "Cut" after ever scene. Netflix doesn't even stock this one. I had to buy it to see it. A total waste of money.
Read more
Helpful
Comment Report abuse

Liriels
3.0 out of 5 stars Quality copy - just not a fan of the story
Reviewed in the United States on December 10, 2019
Verified Purchase
Huge fan of B&W movies, but this one I'd have to classify as a miss (as far as story goes). Not just a little depressing, but the characters are pretty weak. This is a good quality version, so if you like the movie - you will be pleased with it.
Read more
Helpful
Comment Report abuse

Brenda V
1.0 out of 5 stars Both discs... Original order & replacement we're both NO Good!
Reviewed in the United States on April 21, 2020
Verified Purchase
I ordered this from 2 different vendors on Amazon prime and both were defective!
Read more
One person found this helpful
Helpful
Comment Report abuse

Marsa
5.0 out of 5 stars Suspense with Humphrey Bogart & a great cast
Reviewed in the United States on October 12, 2020
Verified Purchase
This is one of y favorite movies. It has mystery suspense and is written well with an amazing cast. Barbara Stanwyck is younger and more at ease with her actions than with television I can watch it over and over and pick up things I missed.
Read more
Helpful
Comment Report abuse

Teresa
5.0 out of 5 stars If you like Humphrey Bogart, then you will love this movie
Reviewed in the United States on January 10, 2020
Verified Purchase
The quality was good, and the picture was very nice I liked everything about the movie.I love Humphrey Bogart .
Read more
Helpful
Comment Report abuse
See all reviews

annie.mac
5.0 out of 5 stars Fantastic
Reviewed in the United Kingdom on February 26, 2013
Verified Purchase
I absolutely love this film, I never thought that I would see Humphrey Bogart being manic in a melodramatic way, but he is brilliant!! And as usual, Barbara Stanwyck is nothing except flawless. If you want to watch a rainy day black and white film that's entertaining with genius moments in it, then this is the one. It was well worth ordering from the USA!
Read more
7 people found this helpful
Report abuse

Mystery Writer Fan
5.0 out of 5 stars TWO SCREEN GREATS TOGETHER!
Reviewed in the United Kingdom on August 8, 2014
Verified Purchase
Great to see these two screen giants together! BARBARA STANWYCK is terrific and HUMPHREY BOGART switches effortlessely it seems to bad-guy mode. He could be equally convincing as a "good-guy" or a "bad-guy". ALEXIS SMITH does her spoilt rich girl act very convincingly. Great print, with excellent sound.
Read more
One person found this helpful
Report abuse

oldmolviejunkie
5.0 out of 5 stars Fabulous film for the golden age of cinema
Reviewed in the United Kingdom on March 15, 2016
Verified Purchase
Excellent drama where Humphrey plays the part of a mad man killer for the sake of his art. Thoroughly recommend this to movie fans of the 40s and 50s who love a good thriller. Spectacular ending!!!
Read more
One person found this helpful
Report abuse

Page 1 of 1 Start overPage 1 of 1
This shopping feature will continue to load items when the Enter key is pressed. In order to navigate out of this carousel please use your heading shortcut key to navigate to the next or previous heading.
Back
Next
Pages with related products. See and discover other items: humphrey bogart movies, barbara stanwyck movies, barbara stanwyck, turner classics movies