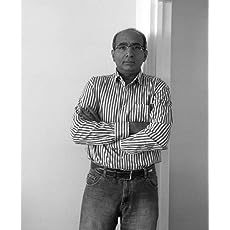 Ty lives with his wife and son, who humor his ridiculous belief that he's in charge. 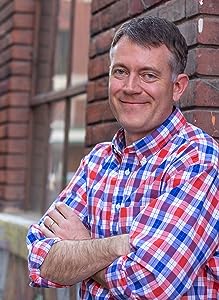 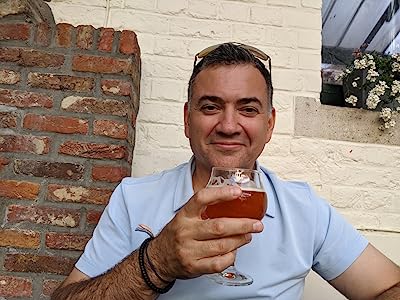 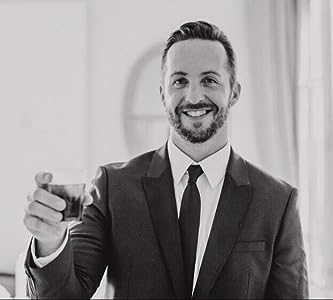 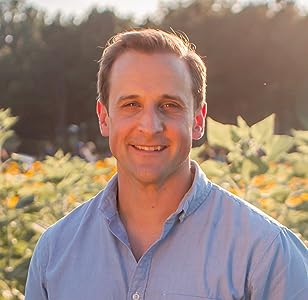 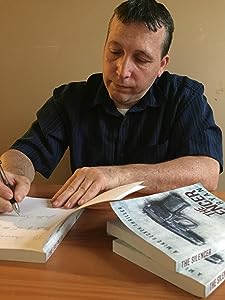 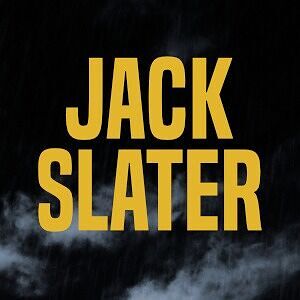 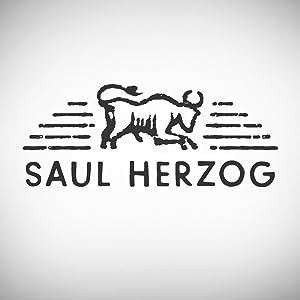 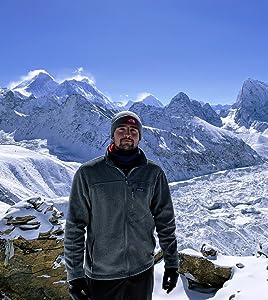 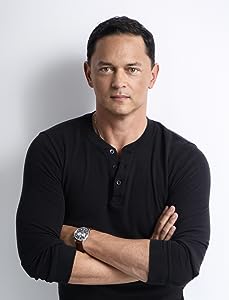 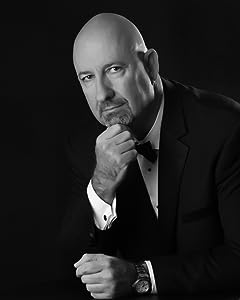 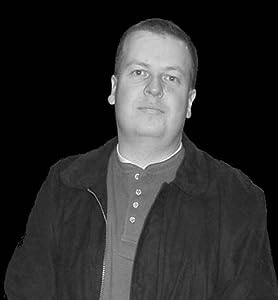 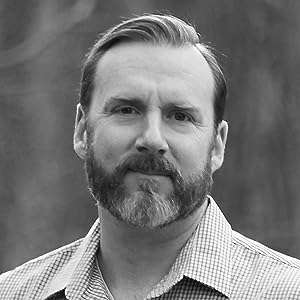 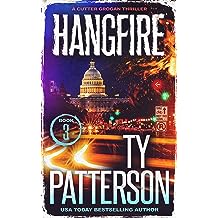 Hangfire: A Crime Suspense Action Novel (Cutter Grogan Thrillers Book 3) Jun 29, 2021
by Ty Patterson
$7.99
In every previous mission, Cutter Grogan has always known who his enemies were.
In Washington DC, everyone is gunning for him.

Amy Breland, Speaker of the House of Representatives, is one of the most powerful people in the country. When Lauren, her grand-daughter, goes missing, she could have turned to the FBI or the Metropolitan Police for help.

He finds out why, when he arrives in DC.

Beneath the surface of the centre of power, he finds juice of a different kind. That wielded by predators who turn him into the most wanted person in the country. Which makes him wonder if there's more to his mission than finding a missing person.

He's trapped in DC, hunted by gunmen, pursued by law enforcement, and chased by old enemies.

That's when he's most dangerous. However, even his lethal skills may not be enough this time. 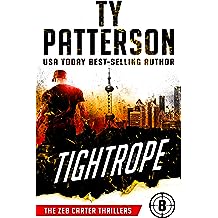 The Taliban want Mir Roushan Pasha, a deadly terrorist, to be released before they will progress peace talks.  They are willing to walk away and resume their killing if their demand isn't met.

The Afghan govt, backed by the US and its allies, is willing to consider such a risky move. The region needs peace and stability after decades of war.


In Tightrope Zeb Carter takes on the might of the ruthless Taliban terrorists, hostile agences and treacherous allies, in the deadliest mission of his life, in the most hostile region in the world.


'More! That will be your reaction after finishing a Ty Patterson thriller'

Ty Patterson's writing is up there with Lee Child, Vince Flynn, David Baldacci and Brad Thor 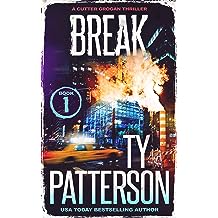 Break: A Crime Suspense Action Novel (Cutter Grogan Thrillers Book 1) Sep 22, 2020
by Ty Patterson
( 302 )
$7.99
Delta Forces operator Cutter Grogan fought for his country.
He gave his all and has the losses and the scars to show.
Now, he's waging another fight. For those whom the system has failed.

Cutter served in the world's most dangerous hotspots and sacrificed everything for his country. His military file has more redactions than words.

That life is behind him. He's a fixer, now. He uses his specialist skills to help those whom the system let down.

When a mother wants him to free her son from the grasp of drug dealers, it sounds like a simple assignment. Knock some heads, give a stern talking to the delinquent. Walk away.

But nothing's ever that simple.

When the most vicious gang in New York is involved in a conspiracy that can destroy the country's foundations, he has a choice to make.

He can back off. Or, he can clean up.

The decision, again, is simple.

The job will be anything but…


Break is USA Today Bestselling Author Ty Patterson's first novel in a thrilling new series set in his Zeb Carter universe. It features his trademark razor-sharp suspense, breakneck action and furious pace that will keep you long in the night. 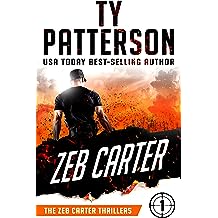 Everything he had been told was a lie.

Former Special Forces operative Zeb Carter couldn't save his family from terrorists. He's never forgiven himself. To escape his guilt, he throws himself into missions--the riskier, the better.

The lone wolf mission in Afghanistan, to rescue American hostages captured by the Taliban, is an opportunity to make peace with himself.

But when he gets there, he finds everything he was told was a lie.

This mission is one last chance at redemption.

It now comes with a heavy price.

Can he betray his country to redeem himself? 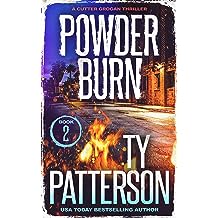 Powder Burn: A Crime Suspense Action Novel (Cutter Grogan Thrillers Book 2) Dec 29, 2020
by Ty Patterson
( 254 )
$7.99
No one does vengeance like Cutter Grogan. He's made it part of his Fixing business.
When his friends are killed in Los Angeles, in gang violence, he makes it personal


The call comes just as Cutter Grogan, the Fixer, has completed yet another mission.

Arnedra Jones, his business partner and friend, has been killed in LA.

He can mourn and let the LAPD investigate the murder. That's not who he is, though.

He decides to take a hand and finds himself in a world of vicious gangs, suspicious allies and a fight he's made his own.

Alone, outgunned and outnumbered by a significant margin, Cutter can back down and walk away.

The decision is easy to make. 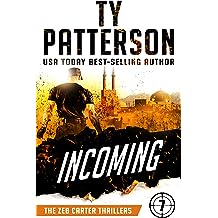 When faced with an audacious attack on America, Zeb Carter does the unthinkable.
He offers himself as bait.


Zeb Carter had stopped the greatest terrorist act against his country.

However the ring leader behind its attack, a deadly intelligence chief, was still out there.

That enemy has an audacious plan to ruin the US and destroy the world order.

Zeb Carter and his team are determined to stop him.

However they'll have to offer themselves as bait.

In a hostile country and in a city that has been turned into a giant prison just for them. 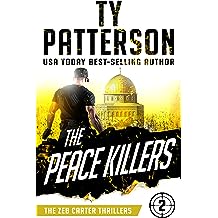 Israel and Palestine are on the brink of war when Mossad is accused of assassinating peace negotiators. A loose word can trigger the conflict which will devaste the Middle East and draw in the rest of the world.

Zeb Carter has to deal with hostile armies, enraged terrorists and corrupt politicians as Israel and Palestine's future, and that of the Middle East, hangs in precarious balance.

And then there are Mossad's kidon, the deadliest operatives in the world, who are gunning for him.


Brimming with edge-of-the seat thrills and breakneck action, The Peace Killers delivers a plot that could be tomorrow's news.

If you like Lee Child, David Baldacci and Vince Flynn, you'll love Ty Patterson's no prisoners taken style of storytelling. 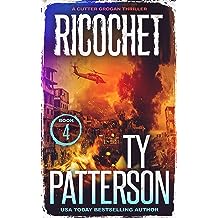 A missing woman in the Middle East isn't the assignment Cutter would take on, but when an old client makes the request, he can't refuse.

Samira Latif's disappearance is shrouded in darkness. His client doesn't have much information for him. The missing woman's connection to one of the most powerful people in the US remains unexplained.

On arriving in Syria, he finds everything he was told was a lie. His old enemies haven't forgotten him and have laid out a welcome.

Was he set up from the start? 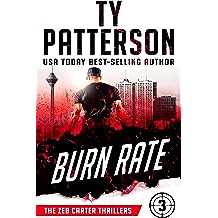 
Zeb Carter goes against a deadly spymaster who intends to attack New York's G20 Summit and destroy the world order.

But that's not all that his enemy wants. 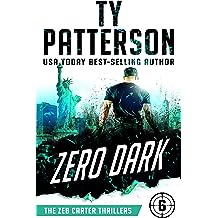 Iran's Islamic Revolutionary Guards want to kill him. Russia's secret intelligence wants him dead. Then there are the Middle Eastern terrorists.

They all come to New York, Zeb's hometown.

They converge on the city where the US President will address the nation.

They will strike at zero dark.

★★★★★ 'Ty Patterson has made room for himself alongside Lee Child, David Baldacci and Brad Thor'

★★★★★ 'Hands down, the best thriller of the year'
Read more
Other Formats: Paperback 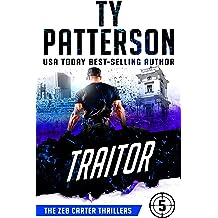 Zeb Carter is branded a traitor when evidence emerges that he's colluding with hostile countries.

The US and allied intelligence agencies act by sending hit teams to silence him.

In Libya, in pursuit of the world's deadliest terrorist, Zeb finds out about his new status when the first kill team attacks him.

Alone, cut off from his friends, surrounded by enemies, hunted by former allies, Zeb knows he has been set up.

Can he stay alive long enough for payback? 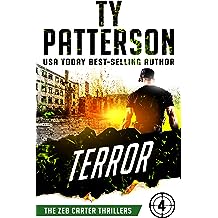 
Terror attacks are surging around the world. Each day a new shooting, a vehicle driven into a crowd.

People wait in dread for the next attack. That fear turns to rage at governments' inability to stop the horrific acts. Riots break out in cities, anarchy rises and democracy is under real threat.

Zeb Carter is tasked with halting the attacks. It's mission impossible. How can he prevent the unpredictable?

As he investigates the killings, against the backdrop of a rising death toll, a disturbing question arises.

What if none of the attacks were random?

★★★★★ 'With Terror, Ty Patterson has made room for himself alongside Lee Child, David Baldacci and Brad Thor'