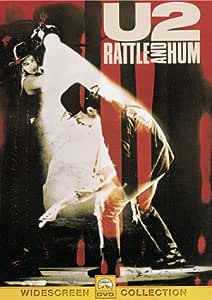 4.8 out of 5 stars
4.8 out of 5
172 global ratings
How are ratings calculated?
To calculate the overall star rating and percentage breakdown by star, we don’t use a simple average. Instead, our system considers things like how recent a review is and if the reviewer bought the item on Amazon. It also analyzes reviews to verify trustworthiness.
Top reviews

Daniel Phillips
5.0 out of 5 stars Mesmerizing from the opening credits.
Reviewed in the United States on June 28, 2020
Verified Purchase
I first encountered this movie in the late 80's when l worked at a video story during High School. Wasn't a big U2 fan but being a huge music fan l took it home to watch. What l witnessed that viewing absolutely blew my mind. I simply had no idea. These were the days of a brooding, uber serious Bono, appeared unprepared for the Cosmic success the band rose to almost over night. The crowning jewels of this film are undoubtedly the live performance. The intensity they brought to the show each night had to mess with their heads in ways you and l will never understand. Over time l wore my VHS copy out, because every time l had an unenlightened l would literally force them to watch this film. In a nutshell it's a snapshot of a band during arguably the most important two years of their lives. As seen in the film, they start out in arenas and about halfway through they were in stadiums, oh and in color. Achtung Baby was in important statement by the band, especially Bono to break away from emotional drag of super stardom and ultimately create a character, along with a wicked sense of humor and the ability to take it all not serious. In closing l will put this right up there with what are in my opinions the most important concert films of all time. the others being, Pink Floyd, Live In Pompeii, Led Zep, The Song Remains The Same, and David Gilmour Live In Gdansk, and Wings Rockshow. I just reordered it and I'm completely stoked to get it and watch it. -Cheers-
Read more
Helpful
Report abuse

El Grande
5.0 out of 5 stars Stirring view of U2 at their peak
Reviewed in the United States on September 18, 2003
Verified Purchase
My bias on this film should be adequately explained by my 21 years as a fan and a veteran of nearly 20 live shows dating back to the "War" tour...
This is simply the best U2 has to offer in live performances that you can go to the store and buy.
The high points:
-"Exit". The one song I was most looking forward to seeing live on "The Joshua Tree" tour, as I knew it would simply kick a** live. It did. The version in the film doesn't disappoint, though we are afforded an inordinate amount of screen time of Bono struggling with the settings for his guitar at the base of the drum riser.
-"Bad". While no better sonically, really, than the version on "Wide Awake in America" (audio only), it is a lovely version, and it leads into the better portion of the film:
-"Where the Streets..." The beginning of the color portion of the film which has a great impact after 45 mins or so of B&W photography.
-"With or Without You" I had the audio version of this movie version on CD from the late 80's, on a promo CD, and still consider this to be the best live version of the song available... Includes an extra verse not on the album version of the song, the inclusion of which has prompted me to refer to this version as the, heh heh, "songs for saps" version of the song.
-"Running to Stand Still" Every time I see this, and I mean EVERY TIME, it makes the hairs on the back of my neck stand up.
-Generally speaking, the whole movie elevates the art of "concert films" to a new level. Nothing else can touch it... Absolutely nothing.
The Low Points:
-Too much humorless interview time. I think the film would've been much better as a pure concert film, as the 'interviews' are sometimes painful to watch.
-"I Still Haven't Found..." I think this has been rightly criticized as a little bit too formulaic.
-The 'wonderment' of 'discovering' the USA. U2 had visited the USA as early as 1981 and had done at least two prior full tours in the USA, from the "War" and "The Unforgettable Fire" tours, so I don't buy their "wide-eyed discovery of The States" bit. They'd seen it before and were merely pretending to make a good movie, and it backfired. Ignore this and watch the live performances.
More than one prior reviewer has decried the poor sound quality on the DVD, but I think I may know why. On both of the DVD players I've had connected to my system, they both default to Dolby Pro Logic sound format... On THIS movie and THIS movie ONLY! Can't explain why... MUCH worse than the Dolby Digital 5.1 that is available if you simply choose this option using your "audio" button on your DVD remote or set it up using the menu before starting the film. Any other criticism of the movie's sound quality is simply people poo-poohing the film for no good reason... I don't know why one of the prior reviewers suggested listening to the DTS soundtrack... THERE IS NO DTS SOUNDTRACK!! What can you trust of a review that implores you to listen to a sound format that simply isn't there??? Don't worry... The sound is awesome.
My 51" HDTV set does show the limitations of the film-to-video transfer, which is merely average. Hopefully they will come out with a new version someday with better video quality.
Anyhow, a must-have for any fan of U2's 80's music. Essential, in fact.

Bob F.
4.0 out of 5 stars U2 at their zenith.
Reviewed in the United States on July 2, 2014
Verified Purchase
This is the U2 that I love. Before they morphed into various other personas. Bono with a "younger" voice and the energy of their earlier concerts. The segments with B. B. King and the Harlem Choir are priceless! Plus 11 songs not included on the audio CD - - especially "Sunny Bloody Sunday" and "With or Without You" among others.

I made a DVD copy of my original VHS, but grew tired of the inferior picture and sound of the copy. Looks especially bad on my new LED TV. The BluRay versions were outrageously expensive so I opted for this DVD. Wow - - what a difference on an original quality DVD. It's like watching it for the first time.
Read more
2 people found this helpful
Helpful
Report abuse

Mr. Impossible
5.0 out of 5 stars GREAT DVD!
Reviewed in the United States on November 14, 2019
Verified Purchase
Absolutely stunning visual and audio. Great songs, imaginative cinematography and editing. I'd give it ten stars if I could.
Read more
Helpful
Report abuse

MallardTop
5.0 out of 5 stars Incredible
Reviewed in the United States on November 30, 2019
Verified Purchase
This has been one of my favorite movies since I was young. The cinematography is incredible and it captures such an phenomenal snapshot of musical history.
Read more
Helpful
Report abuse

Rick
5.0 out of 5 stars Best rock'n'roll movie ever in my opinion.
Reviewed in the United States on November 9, 2018
Verified Purchase
Not my first purchase of Rattle and Hum. Have it on VHS as well. Rattle and Hum is a true music movie. No actors. No plot. Lots of good live footage. Some good behind-the-scenes portions. U2 is a great group. Saw them again this year at their first show of their 2018 US tour.
Read more
Helpful
Report abuse

texasFox
5.0 out of 5 stars Take a trip with U2
Reviewed in the United States on December 25, 2013
Verified Purchase
I have always loved the music of U2, the very sound of it. I owned this on VHS and have finally replaced it. The interviews are insightful. They take you on a trip around the US with the band, with just pieces of concerts interspersed, but the music of U2 provides the sound track to the travels. This is a young U2. Some of the places they chose to visit are quite interesting and give you insight into their character.
Read more
Helpful
Report abuse

Todd O
5.0 out of 5 stars Exactly as described!
Reviewed in the United States on August 21, 2018
Verified Purchase
The DVD was exactly as described - the 30 year old case had a little wear, but the DVD played perfectly!
Read more
Helpful
Report abuse
See all reviews

Mike Tremblay
5.0 out of 5 stars On time and as expected
Reviewed in Canada on August 31, 2019
Verified Purchase
Got what I paid for and within a reasonable amount of time for delivery.
Read more
Report abuse

ronald cox
4.0 out of 5 stars Four Stars
Reviewed in Canada on May 4, 2015
Verified Purchase
Great DVD Couldn't ask for anything better. Thanks
Read more
Report abuse